But perhaps the Warrawong Sanctuary founder is better remembered by some for wearing a hat made from the pelt of a feral cat to the 1991 SA Tourism Awards.

The conversationist’s contributions to the South Australian environment have now been set to music by Adelaide band Goldstein with the explicit title “F*** all left”.

The group’s UnSung Folk project celebrates the heroics of unique South Australians who have impacted generations.

The band’s frontman Adam Hooper said the project was in line with the folk tradition of “telling stories about the people and places we know”.

He said he first met Wamsley on a school excursion to Warrawong more than 20 years ago.

“He seemed like a giant and I did get to see a platypus for the very first time that day,” Hooper said.

“We could have written a whole album or two on John’s achievements and adventures over the years, but the thing that really sticks in my mind is that he is still on the ground working to save the bush for future generations.”

Wamsley was born in New South Wales and moved to SA at the age of 30 to teach mathematics at Flinders University after completing a PhD.

He bought a 14-hectare dairy farm near Mylor in 1969 and spent decades with his wife Proo Geddes eradicating all feral plants and animals from the property and erecting a 2.1m electric fence it to keep them out.

Wamsley’s efforts were recognised when he was named the Prime Minister’s Environmentalist of the Year for 2003.

The Warrawong Sanctuary is home to a diverse ecosystem of native plants and animals including platypus, koalas, kangaroos, wallabies, bandicoots, potoroos, and rare birds.

The sanctuary was taken over by WA couple David Cobbold and Narelle MacPherson in 2017.

Wamsley and Geddes still live in the Adelaide Hills where he regularly volunteers with a group removing feral blackberry bushes from Scott Creek Conservation Park. 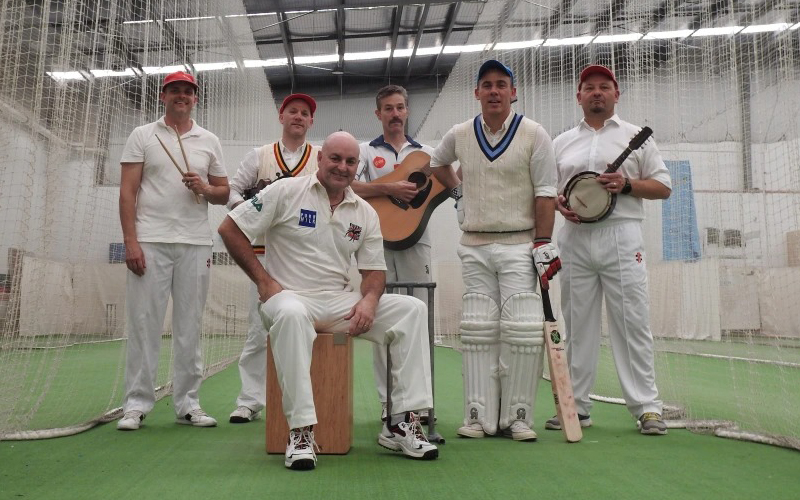 Goldstein members with SA cricketer Peter McIntyre, who is the subject of one of their songs.

And what does Wamsley think of Goldstein’s tribute?

“It’s all very humbling,” he says at the end of the nine-minute YouTube video.

Hooper said the UnSung Folk project began during the COVID-19 pandemic when live music was on hold.

“So we focussed our attention on writing and recording songs about great South Australian people that we’ve encountered but whose stories may be lost to future generations,” he said.

“To write honestly, we had to get to know these people better, so we interviewed them, read their books, and researched and had a brilliant time hearing their stories and then sharing them through our songwriting.”

Goldstein will play at The Gov in Hindmarsh on Sunday, July 24, as part of its Winter Warmer sessions.