The Economist Intelligence Unit’s 2022 Global Liveability Index released today named Melbourne as Australia’s most liveable city and joint 10th in the world, while it pushed Adelaide down 27 places – the third-biggest ranking drop of any city.

The European cities of Vienna, Copenhagen and Zurich took out the top three spots in this year’s EIU index, followed by Calgary and Vancouver in Canada.

The EIU index ranks 172 cities across the world based on the five categories of stability, healthcare, education, culture and environment, and infrastructure.

Adelaide’s aggregate rating across all five categories dropped from 94.0 to 90.7. Last year’s index gave Adelaide a perfect 100/100 score on healthcare.

The EIU said the rankings tumble of Australia’s capital cities was due to the continued imposition of COVID-19 restrictions while Europe moved on from the pandemic.

“In Australia, some states were slower to lift restrictions than others,” the report states.

“As a result, Perth and Adelaide have lost ground since last year, and Melbourne is once again Australia’s highest-ranked city. Adjusting policy dynamically will remain key to staying on top.”

Adelaide’s 27 spot drop was only beaten by Wellington (4th to 50th) and Auckland (1st to 34th). Perth and Brisbane also fell 26 and 17 spots respectively.

“A rollback of covid-19 restrictions has translated into liveability rankings resembling those seen before the pandemic,” the EIU said.

“Western European and Canadian cities dominate the top of our rankings. Life is almost back to normal in these cities on account of high covid-19 vaccination rates and the easing of restrictions.”

Adelaide’s lost status as Australia’s most liveable city has been trumpeted by politicians and industry bodies regularly over the last 12 months.

I think if we’re going to do a big song and dance about being the most liveable city in the country … you can’t just dismiss it when it goes against you.

The Committee for Adelaide, a think tank which currently describes itself as “Shaping Australia’s most liveable city”, said of last year’s third place ranking that “our only surprise … is that we didn’t come in higher”.

Former Committee for Adelaide CEO Jodie van Deventer said at the time: “Our city’s brand is stronger than ever and our potential to attract global business and talent is enormous as international borders begin to open.”

Today, the committee’s current CEO Bruce Djite said “there’s going to be a lot of websites that need changing, including ourselves”.

“We probably shouldn’t have spruiked it as much when we were most liveable and third most in the world, because it’s going to be a bit of recalibrating of websites that’s for sure,” he said.

“From a Committee for Adelaide point of view we want to be the best in liveable, and The Economist is just one of a number of benchmarks.

“But I think if we’re going to do a big song and dance about being the most liveable city in the country on the back of The Economist’s report last year, you can’t just dismiss it when it goes against you.

“We’ll be changing our website that’s for sure but it doesn’t change anything that we’re trying to do.”

Djite said the ranking was also “a good way to keep up on our toes and to ensure that we keep progressing and evolving”.

“Or else at the end of the day we’ll keep falling further and further back in the rankings,” he said.

“Obviously it’s a bit of an anomaly, we were so high last time and we handled COVID so well, in The Economist’s view, we’ve tumbled so quickly this time because they don’t feel we’ve handled COVID as well.

“But I think the underlying narrative from our perspective anyway is that there’s pressure – we live in a competitive world.

“The easy response would be to shout negativity from the rooftops, but that’s unhelpful for a few reasons and would dampen confidence,” he said. 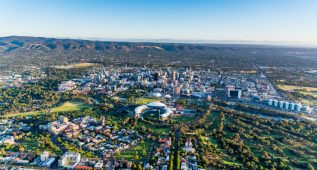 “Adelaide’s ranking as Australia’s most liveable city might have come to an end, but we should use this moment as an opportunity to regain the world’s attention.

“Throughout the pandemic, Adelaide’s value proposition as an attractive place to live, work, invest and play has become more pronounced – and we don’t need a ranking to support or celebrate this change.”

He also took a shot at Melbourne, saying it was “almost laughable that Melbourne has finished higher on this index given Victorians spent almost 300 days locked down compared with ten days in South Australia”.

At the other end of the rankings, Damascus, Lagos and Tripoli rated as the world’s least liveable cities. Ukraine’s capital Kiev was excluded from the list due to Russia’s invasion.