Salisbury East copped the worst of the overnight deluge as most of the Adelaide Metro area recorded between 30-70mm of rain this morning.

A “small, brief” tornado struck Salisbury and its surrounding suburbs at around 5am, according to the State Emergency Service, with the agency now responding to more than 300 calls for help across the state including 150 jobs in the Salisbury area.

Nearby, Golden Grove has recorded 70mm of rain in the last 24 hours, including 30.2 mm in the one hour to 6.15am, according to the Bureau of Meteorology. 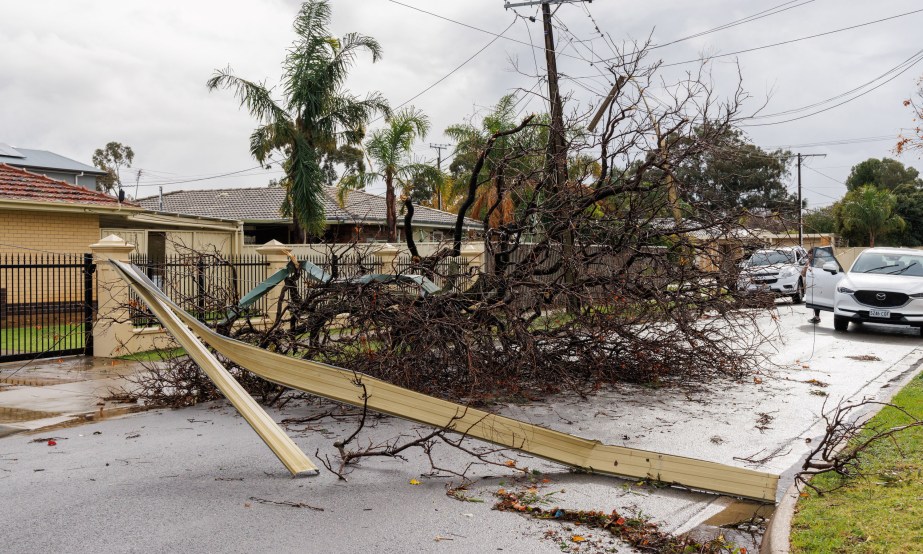 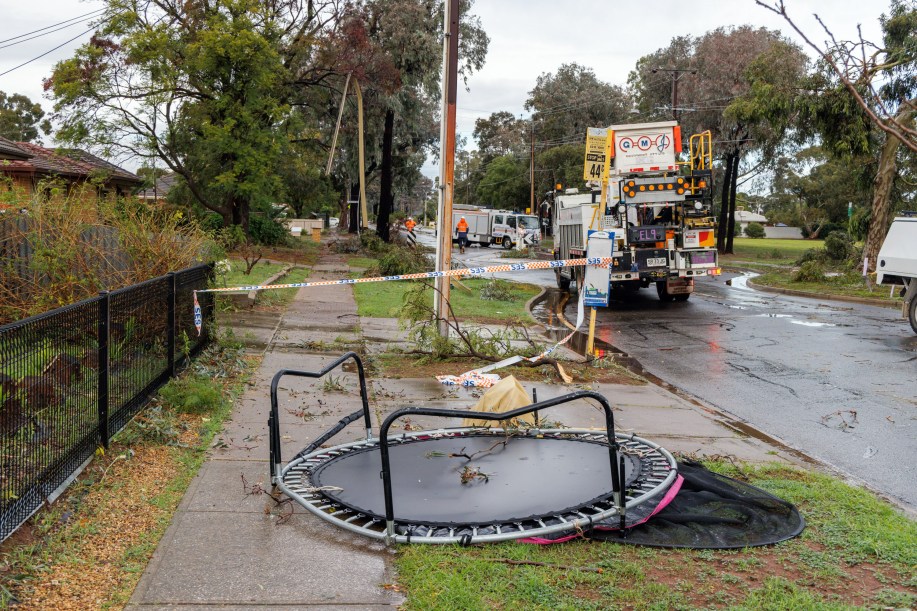 SES state duty officer Robert Charlton said he was not aware of any injuries at this stage but there was extensive damage to properties in the Salisbury area.

“We’ve seen a lot of damage caused by wind, so trees down, trees on houses, trees across roads,” he said.

“One of the issues we’ve had is that our crews have been restricted in accessing areas because as they’ve tried to go to a request for assistance, they’ve come across other trees and had to clear the road before getting there.”

Parts of Main North Road spanning Salisbury Heights and Blakeview remain closed due to floodwaters, according to TrafficSA.

The Salisbury Highway in Parafield Gardens has also been closed due to flooding, as has Victoria Road in North Haven and Adelaide Road in Mount Barker. 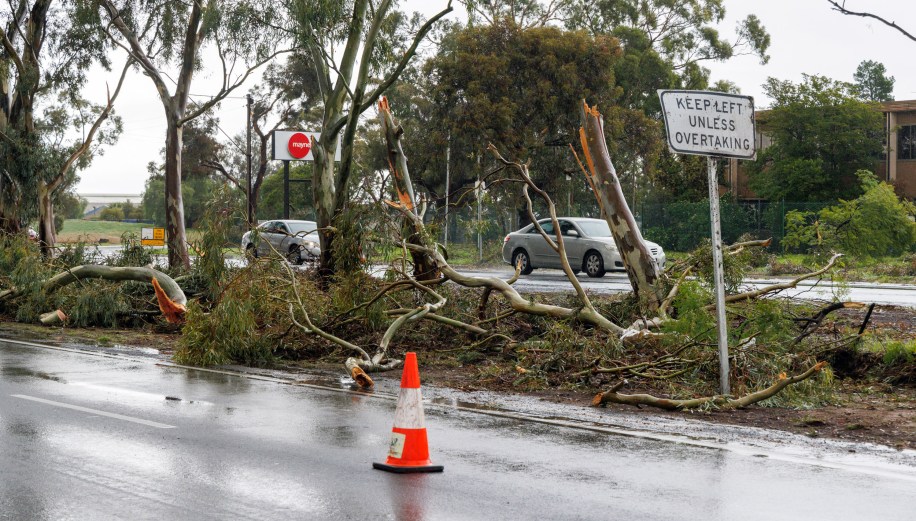 The whole house shook, tiles were ripped off, my air conditioner got blown into the backyard virtually.

The deluge has come from a deep low-pressure system and cold front moving eastward across the state, the BoM says.

“We’ve also seen some damage to roofs, so damage to air conditioners, damage to roof tiles and then obviously with the rains at the same time, water entering through roofs,” Charlton said.

“We certainly have seen quite a lot of trees downed and power lines … we’re still assessing the full extent of the damage so there’ll be more jobs coming in.” 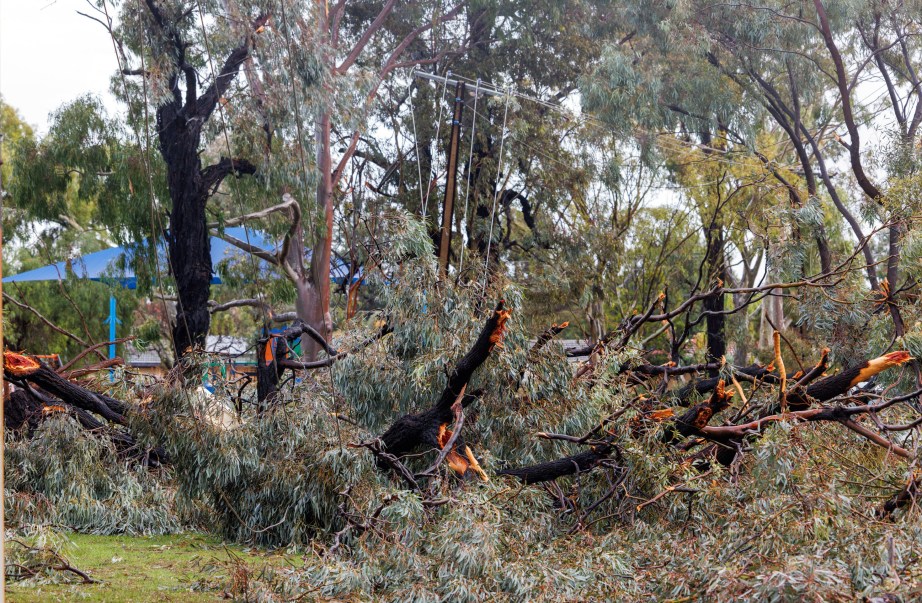 SA Power Networks reported around 10:30am that more than 4300 properties across Salisbury and suburbs further east such as Athelstone, Newton, Paradise and Rostrevor were without power.

Power has since been restored to around 2000 properties, SAPN reported, with the company attributing the outages to vegetation contact with powerlines.

Damage from the storm has also forced the closure of Gulfview Heights Primary School in Adelaide’s north.

An Education Department spokesperson said there were broken windows and trees down on the school’s grounds.

“We are aware of six other schools/pre-schools that have been impacted,” the spokesperson said.

“These have generally experienced some flooding or power outages, but they have remained open.”

Salisbury East resident Warren called ABC Radio this morning and said the weather event sounded “like a freight train coming towards the house”.

“It just got louder and louder, and then all of a sudden it just hit,” he said.

“The whole house shook, tiles were ripped off, my air conditioner got blown into the backyard virtually.

“There’s trees down, electrical wires are down everywhere and it’s only like a 100 metre stretch of the street, and either side of that is fine.” 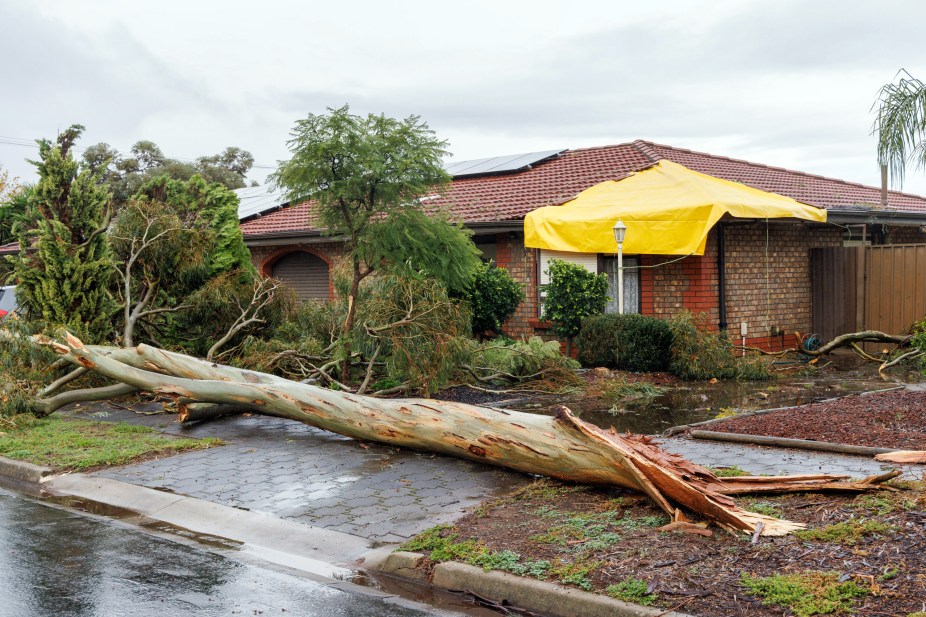 Damage to a house on Earl Avenue in Salisbury. Photo: Tony Lewis/InDaily

He said the storm had ripped a hole in his roof.

“I’ve never been through it before but you could hear the wind, it was really scary,” he said.

“It’s just ripped through a narrow space and it’s just gone straight over our house.” 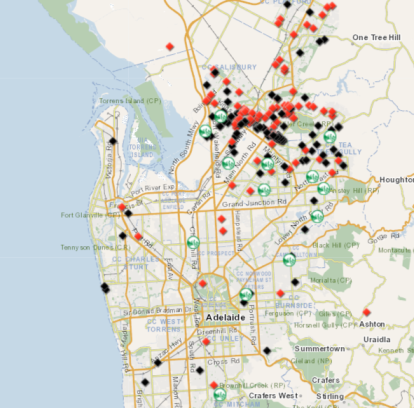 SES map showing where the bulk of water and wind damage incidents callouts have been.

Today’s deluge is the latest in a series of extreme weather events to hit South Australia over the last 12 months, including an October Spring storm in the northern suburbs which caused more than a $100 million in damage and a “one in 200-year flood” in February which cut off towns in the state’s far north.

Charlton said some residents who had not yet fully recovered from the October hailstorm have now been hit by the latest weather event.

“Obviously it’s a little bit different, and obviously the hail causes a lot of damage to skylights and that’s what sort of punches through and allows the rain to go through,” the state duty officer said.

“So we haven’t seen that although we do know that some people in that area haven’t been able to get their repairs done since that storm event so that again would have exacerbated the damage for this one.”

The SES has now set up 23 sandbag collection points for people combatting potential flooding in their homes.

The BoM has now cancelled its severe weather warning for the Adelaide Metro and Mount Lofty Ranges districts.

“At this stage, the weather should dissipate a little during the day but we may see some more winds overnight,” Charlton said.

“Although at this stage the Bureau is not forecasting it to be as severe, but there may still be some more weather to come overnight.”

Gutters completely blown off roofs, trees and powerlines down in #Salisbury east after wild weather last night, locals described the storm as a “mini tornado”. 55mm lashed the area overnight, cleanup underway but it’ll be a long one @abcadelaide pic.twitter.com/XuQh6K00Zp

Charlton called for patience and asked for the public to monitor the conditions and “never walk, drive or play in floodwaters”.

“We’re trying to bring in as many crews as we can but we will need to prioritise and it will take us some time,” he said.

“We’ll certainly be working for the rest of today and we may well be working through jobs tomorrow.”