Rains across the state eased overnight after fierce storms drenched Port Augusta and the APY Lands on Monday, on top of huge downpours and flooding which hit the upper and lower Eyre Peninsula last week.

The impact of the unseasonal deluge cut road and rail routes, isolated some communities and prompted a state emergency declaration.

Lower rainfalls are forecasted for the days ahead, however, with the Bureau of Meteorology this morning cancelling its severe weather warning for the North East Pastoral District.

“The immediate threat of severe weather has passed, but the situation will continue to be monitored and further warnings will be issued if necessary,” the Bureau said in a statement this morning.

After the APY Lands community of Putkatja recorded 101.6mm of rainfall on Monday, State Emergency Service chief of staff Graeme Wynwood said many of the roads in the region are still inaccessible.

“There’s still a lot of roads that you can’t get through on the APY Lands,” he said.

“A number of certainly the dirt roads are still blocked in a lot of the north area.”

Wynwood said the SES was looking at the isolated areas and “developing a strategy about how we’re going to support these people”.

“We’ll look at whether we need to fly resources in or whether we can fly them into a .. centralised place that they can access resources from,” he said.

Premier Steven Marshall said the State Government has “taken over every available plane at the moment” to ensure critical supplies reach remote communities.

“The only option for getting product onto the APY Lands at the moment seems to be on the air,” he told reporters today.

“We’ve contracted all the charter operators at the moment to make sure we can get critical supplies, medical personnel to support those communities.”

The Premier also said an “alternative accommodation” facility for COVID-positive Aboriginal people in Port Augusta is “affected at the moment by the rains and the flooding”.

“And it also compounds on the APY Lands with the Stuart Highway cut off for the foreseeable future,” he said.

“This is one of the reasons why we’ve had to work with all the charter operators in South Australia, I think we’ve taken over every available plane at the moment to be able to make sure we can get the right sort of medical supplies and personnel to support these very remote Aboriginal communities.”

There are currently nine COVID-19 outbreaks in Aboriginal communities being managed by SA Health, Marshall said.

It comes as a 250km stretch of the Stuart Highway between Glendambo and Coober Pedy remains closed indefinitely.

Wynwood said the 400ml of floodwater on the critical highway which services Adelaide and Darwin were only receding between 20-30ml a day.

“Until the water recedes enough for DIT (The Department for Infrastructure and Transport) to make a proper assessment, that will continue to be closed,” he said.

“We are investigating some other options around things like a portable bridge that the army has access to.

“There’s a number of other strategies around deep watering but it’s quite complicated, and there’s an awful lot of water – it will take some time.”

The road closure has cut off Coober Pedy from the rest of the state, with the RAAF flying in critical supplies to the town daily.

The SES and SA Police held a community meeting with Coober Pedy residents on Tuesday afternoon.

Wynwood acknowledged there was “unhappiness” from locals over the ongoing highway closure and lack of timeframe for its reopening.

“I guess the frustration is really around there’s no definitive timeline,” he said.

“I think people though are comfortable though that the government is paying attention, we are flying food so we are trying to make sure they’ve got the resources they need.” 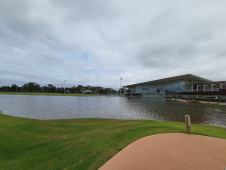 SA's soaked north mops up and braces for more

Marshall said the State Government was checking on the fuel supplies of the Royal Flying Doctor Service in case Coober Pedy residents needed to be evacuated due to a medical emergency.

“I understand that people in Coober Pedy are very frustrated at the moment.”

“My advice from the SES chief officer and SAPOL … is that we really do need to be clear that is a very dangerous situation with more rain forecast.

“There’s certainly been no advice to me that we need to be evacuating people from Coober Pedy at the moment.

“But of course, if there is a medical emergency, we still have the services of the RFDS – we’ve checked on all their fuel supplies.”

The Premier also today flagged that the 14-day major emergency declaration could be extended depending on how the situation evolves.