The State Government’s screen authority and investment agency announced today that Cooper, chair of South Australian engineering company Nova Systems, had been appointed to a three-year term as presiding SAFC board member from December 4.

It comes after current SAFC boss Peter Hanlon flagged in October he would step down at the end of the year to pursue a business partnership with city-based arts and entertainment hub Light Adelaide.

Minister for Innovation and Skills David Pisoni said Cooper brought a “huge amount of business experience that will benefit the SAFC during her tenure”.

“Through this appointment Ms Cooper’s depth of experience, knowledge and qualifications will be extremely valuable to the SAFC and ensure strong leadership in the role as Presiding Member,” Pisoni said.

“I also acknowledge the contribution made by the outgoing Presiding Member, Mr Peter Hanlon, who provided strong leadership to the SAFC Board during the past three years.”

Prior to her move into non-executive management, she worked for more than eight years as an Associate Principal at McKinsey and more than 12 years as a Director at BAE Systems.

Cooper said she was “thrilled” to be joining the screen agency ahead of its 50th anniversary next year.

“I look forward to working with the Board and SAFC team to support South Australia’s screen industry and the talented people working in the sector through production of creative, vibrant, and prosperous feature films, television, and digital screen projects.” 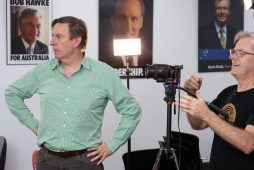 The SAFC also today announced the appointment of Austin Taylor to the agency’s board.