In an email sent to Aquatic Centre users on Wednesday, centre management wrote that it had made the “difficult decision to maintain the closure of this (spa) service indefinitely”, after the popular spas were first closed in March last year due to the COVID-19 outbreak.

The spa pool was one of several Aquatic Centre facilities earlier identified as requiring upgrades within the next three years.

The council’s city shaping director Tom McCready told InDaily that the spas were over 30-years-old and “at the end of life”.

He said staff had estimated it would cost over $100,000 to replace the spas, but the council had decided to not undertake any Aquatic Centre upgrades next financial year as it progresses with plans to construct a new swimming centre in the park lands.

He said in 2022-23, spending on the Aquatic Centre would be determined on condition, audit and risk across all the council’s assets.

From 2023-24, the council will stop spending money on Aquatic Centre upgrades following a request from councillors in April.

The construction start-date for the new centre is yet to be determined, with the council still appealing to the state and federal governments for funding as it progresses with a “detailed feasibility study”.

“The Adelaide Aquatic Centre is fully operational whilst still managing COVIDSafe conditions, including density requirements that must be adhered to,” MCready said.

“Council remains committed to providing a safe and enjoyable service to our many customers who continue to use the Aquatic Centre.

“Council is currently investing in the repair of the sauna and steam room to ensure they remain operational.”

McCready said elected members were advised on Wednesday morning that the spas would remain closed.

It comes after the council closed the diving tower indefinitely in late 2017 amid safety concerns.

Other facilities identified by the council as requiring upgrades by the 2023-24 financial year include the centre’s filtration system, changerooms, eastern grandstand, sauna, steam room and air-conditioning unit in its reception area.

North ward councillor Phil Martin said the Aquatic Centre was being “slowly strangled to death” by decisions to close facilities and pause funding.

“If the filtration system goes I’m betting the pools will be drained and the turnstiles will be locked. That’s how close we are to losing it,” he said.

“The game they’re playing here is all or nothing; they’re saying give us slabs of federal and state cash for a new Centre by June next year or, in my view, not a cent will be spent on vital capital projects with the inevitable the closure of this important community service. 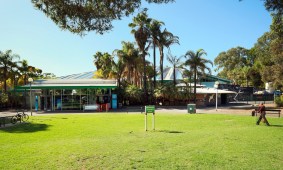 “The diving tower is closed, huge sections of seating are closed off because of concrete cancer and now the spa is gone, the saunas are closed and there’s a chance a major infrastructure break down will see the end of the facility.”

The council anticipates to spend up to $60 million building a new Aquatic Centre, but that cost is dependent on the state and federal governments chipping-in.