This time last month, Ryan Anderson had a gig in a department store photographing children with Santa Claus.

Since that job ended though, he’s been working all hours, seven days a week – and without getting paid.

The 22-year-old and his twin brother Luke, an IT worker, have developed a site that maps official health warnings for COVID hotspots – and clusters in New South Wales, Victoria and now Queensland have seen the project balloon from a hobby to a full-time labour of love.

“The whole idea of it started about a month and a half ago when we had our little outbreak in Adelaide,” Ryan tells InDaily.

“We were looking through the list of locations identified by SA Health and thinking ‘we don’t really know where these places actually are’.

“We knew roughly where they were, but not exactly [so] Luke came up with the idea that someone should make a map.”

Ryan said he did “some quick research and came up with a Google Maps idea”, and the pair constructed a site updating locations listed on SA Health’s own page.

It got some local traction, attracting around 150,000 visits across the duration of the Parafield cluster.

“Luke came up with a bit of the branding and social media, and the way we do the icons – my job has been to sit there and type in all the locations,” Ryan says.

But no sooner had things settled down in Adelaide than new clusters emerged in the east.

“When that started I was right at the end of doing a Christmas job – I was one of the photographers taking photos with Santa in shopping centres, which was essentially a full-time job at that point [but] this has pretty much been almost every single minute of seven days a week since about the 17th/18th of December,” he says.

“After the success of the SA map, the moment the NSW outbreak started and the new locations started coming up, we figured it would have been bad if we didn’t do it.” 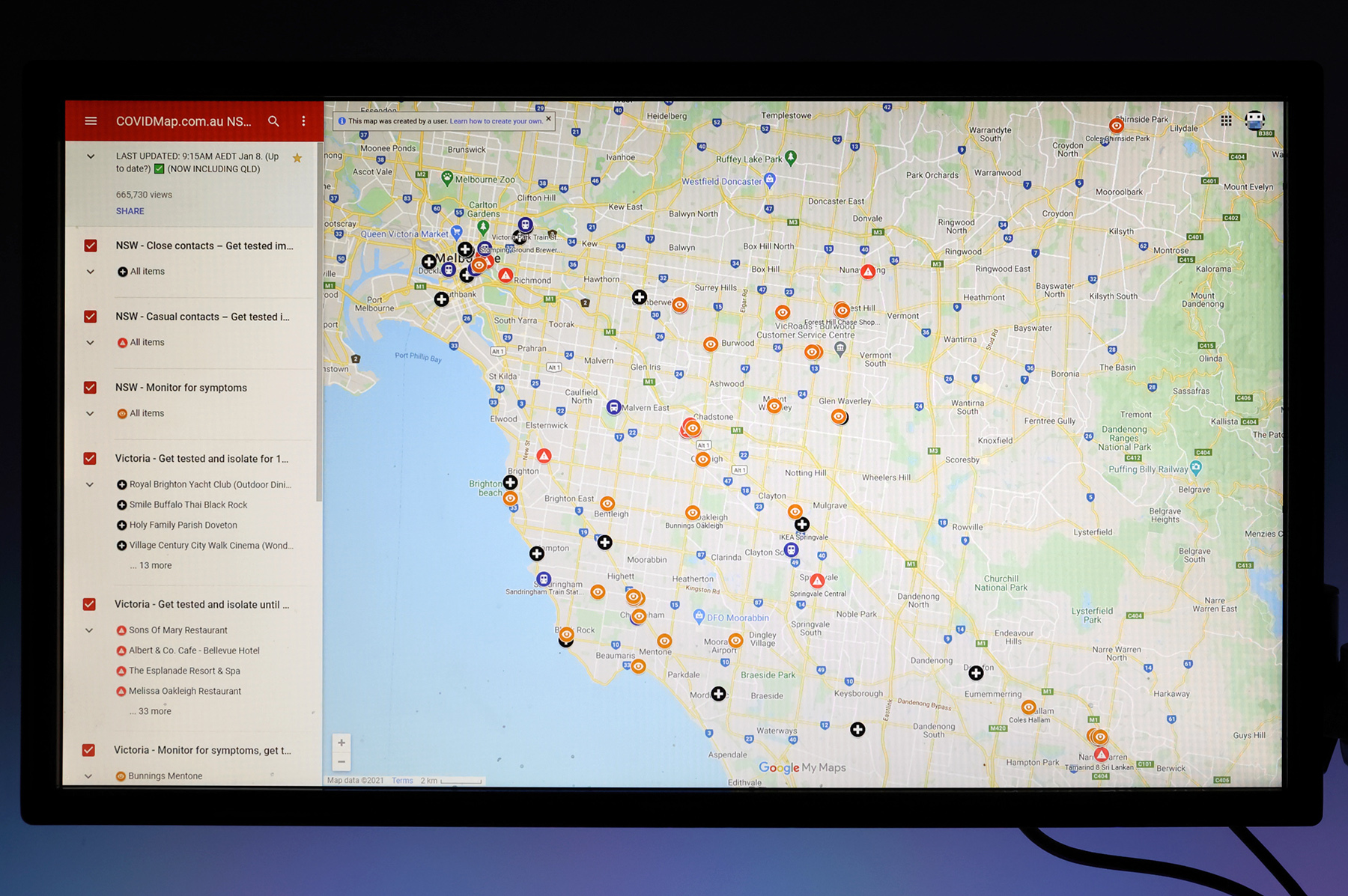 Ryan says the site – COVIDMap.com.au – is “a public resource, basically”.

“We’re not making a single dollar out of this, we’re just doing it to help people,” he says.

“I initially made it really for myself so I could see on a map where the [Adelaide hotspots] were”.

The pair promoted the site via Reddit and by posting links in the comments sections of government Facebook pages, and have also received enthusiastic promotion from other high-profile COVID data trackers.

Exposure sites are being updated hourly in VIC and NSW

I highly recommend these two accounts to stay informed.
They even highlight the updates/additions.#COVID19Vic #COVID19Nsw@COVIDMapAU@COVID19NearMeAU

When the site began, SA Health did not utilise a map. Ryan says other states do provide COVID mapping “but you can’t really use the zoom [function]”.

“There are a couple of other people [in Australia] doing maps, but no government sources are doing what we do,” he says.

They utilise one underlying rule: “We don’t ever, ever add a location to the maps that’s not on the government website.”

Ryan says sometimes certain suburbs or businesses are cited in media reports as being implicated in the clusters, but “if it’s not on the official government website, we’re not adding it – simple as that”.

As for how far the pair plans to take the project? “However long it goes for,” says Ryan.