The latest changes to the proposed 108-metre-high office tower and retail building have been commended by the Government Architect for creating a “welcoming arrival to the precinct”, but the state’s principal conservation architect believes the development would misalign with Parliament House, “diminishing both the setting of the heritage building and the urban design”.

The State Commission Assessment Panel (SCAP) will consider the plans today but, despite the heritage concerns, the report prepared for members recommends granting building consent.

Most of the suggested changes to the development are uncontentious, including the use of different building materials, adding a pedestrian walkway and internal reconfigurations.

Of most concern is a plan to extend a two and three-storey retail building, fronting the Festival Plaza, three-metres closer to King William Road. 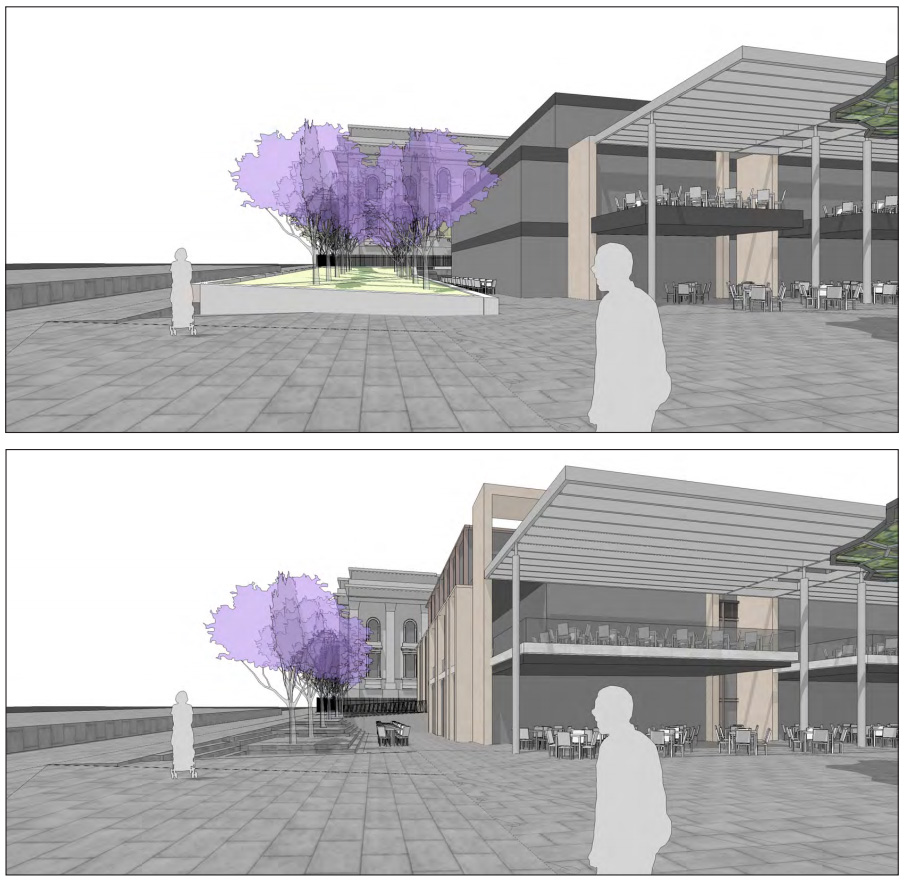 In his submission to the SCAP, Heritage South Australia’s principal conservation architect Peter Wells wrote that the encroachment would result in “the loss of the formal and disciplined alignment with the second bay of Parliament House”, which is a state heritage-listed building.

“The proposal to vary the current approval by encroaching into the curtilage.. impacts both the response to heritage setting and the urban design outcome,” he wrote.

“Putting aside peripheral arguments about dynamic viewing positions and cut-off angles, I consider that a fundamental formal quality is lost in the proposed misalignment of Parliament House and the eastern retail edge, diminishing both the setting of the heritage building and the urban design response.”

According to the architectural plans submitted by architect Johnson Pilton Walker, the proposed changes will create a more “cohesive relationship” between the tower, retail building and Parliament House to provide a “welcoming, accessible and active” frontage to King William Road.

“The new alignment (of the retail building) creates a comfortable and well-proportioned space to the east… that can support outdoor dining at the upper level, create a seamless pavement connection around Parliament House, and an active end to Parliament Lane,” the plans state. 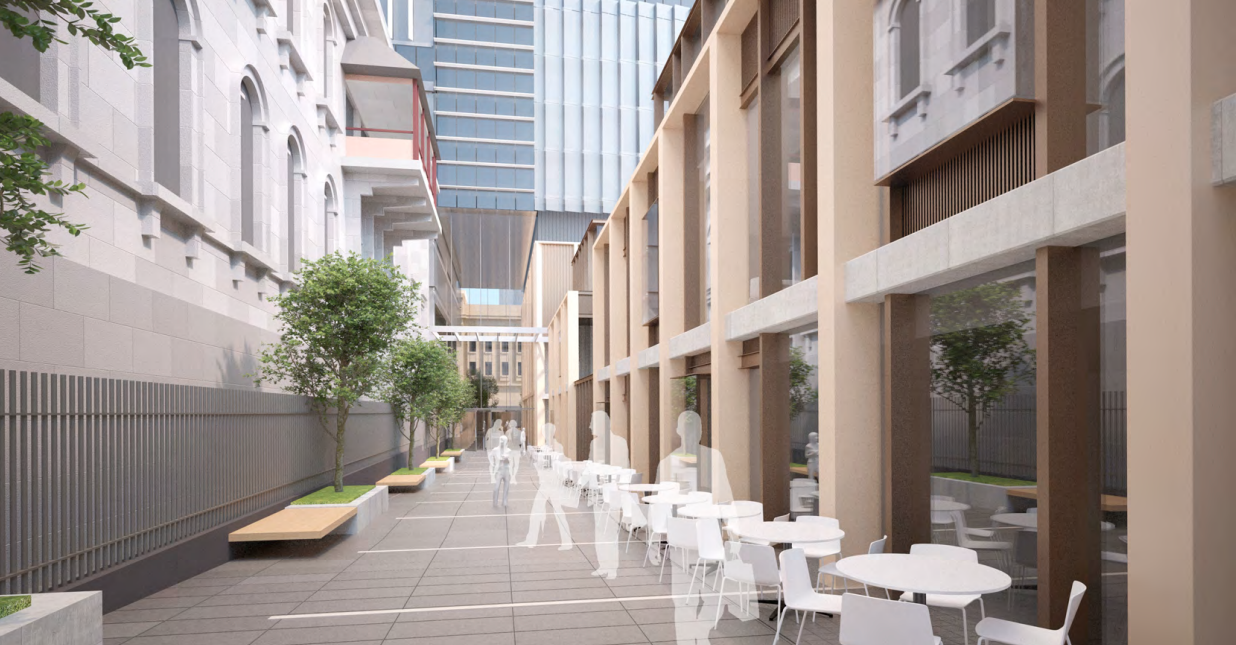 But t­he SCAP report, prepared by development assessor Gabrielle McMahon, notes that the position of the retail building “is misaligned with visual connections for Parliament House” and will “further obscure views to its north-eastern corner”.

“Based purely on heritage implications the proposed new alignment has shortcomings,” she wrote.

However, McMahon’s report advises SCAP members that heritage matters are only “one matter for consideration” and the assessment “needs to be balanced against the existing approval and the proposal as a whole”.

The report states the encroachment “does have a number of worthwhile benefits”, including expanded retail offerings, a more “welcoming arrival” to the Festival Plaza and better pedestrian access.

“On balance, this new alignment, while diminishing the heritage setting of Parliament House and the urban design response, is not considered to be detrimental to the overall success of the development, when the application is considered in its entirety,” McMahon wrote.

“While the alignment of the eastern retail pavilion is considered to have a heritage impact on the setting for Parliament House, it is not considered to be fatal to the application and support for the variation is warranted.”

She said the encroachment of the retail building “maintains key views of the north east corner of the Parliament Housing building and importantly provides an active edge and welcoming arrival to the precinct”. 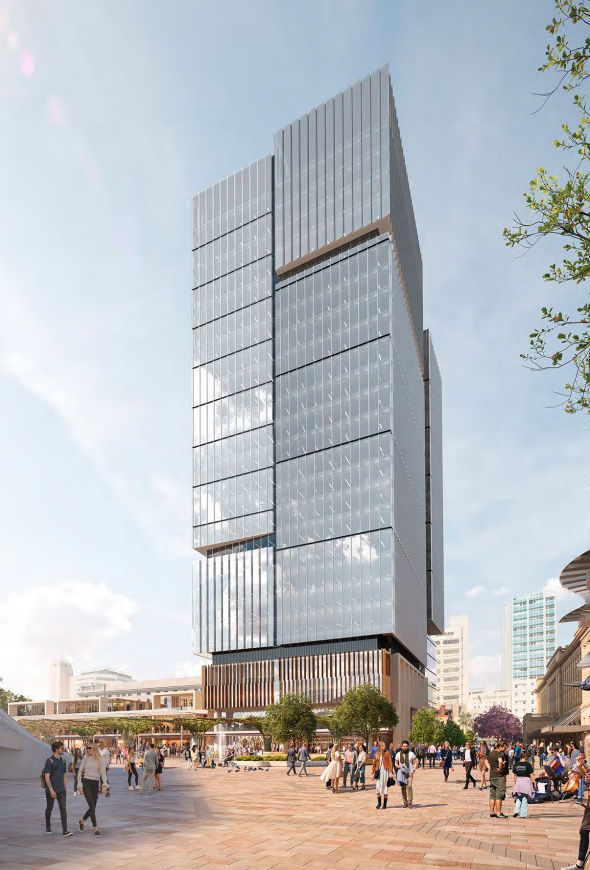 The development application was listed as Category 1, meaning no public notification was required.

As well as the 27-level office tower and two and three-level retail building, the development also includes a five-level, 1560-space underground car park, which is currently under construction.

The developer’s initial plans were given the green light in November 2016.

The State Government announced in yesterday’s budget that it would spend $31.2 million over four years on public realm upgrades to the Festival Plaza.

The work, which is subject to a separate development application, includes installing escalators, a new lift in the Dunstan Playhouse and additional paving and slab strengthening to support the Adelaide Festival Centre.