The council has had since 2016 to choose a route for the jointly-funded east-west cycling corridor, but councillor indecision and repeated delays has meant the project has stalled, despite a looming June 2021 funding deed deadline.

Council staff were last night forced to call a special meeting to present councillors with a suggested route, with one director warning the State Government’s $3 million contribution “will be withdrawn if the bikeway is not delivered by the 30th of June 2021”.

“The Department has notified the City of Adelaide that the deed is unlikely to be extended,” Place Director Klinton Devenish said.

“However, we are working with the Department and we have a verbal agreement with them that as long as we can identify a suitable east-west route and we can demonstrate that we have the ability to commence the work and get a fair proportion done, clearly there is an intent in the deed in the east-west bikeway.”

The council’s transport services manager Daniel Keller said it was possible to get the bikeway finished if the council signed off on the plans by the end of the year and limited community consultation to only the “key stakeholders” along the proposed route.

It’s also unlikely that the bikeway will be completed to the same standard as the north-south route along Frome Street, which last year won an Australian Institute of Landscape Architects award after a failed first attempt that had to be ripped up and replaced.

The former council endorsed Flinders and Franklin streets as the preferred east-west route in 2017 – an option also favoured by the council’s transport planners – but that corridor was sidelined by current elected members aligned with the Team Adelaide majority faction, who instead favoured Grote and Wakefield streets.

Keller said council staff had considered all east-west routes in the city, including Pirie to Waymouth Streets, Flinders to Franklin Streets and Grote to Wakefield Streets.

He said the “preferred” and “most workable” option would be to construct a route along Flinders, Franklin and Wakefield Streets, connected via Gawler Place. 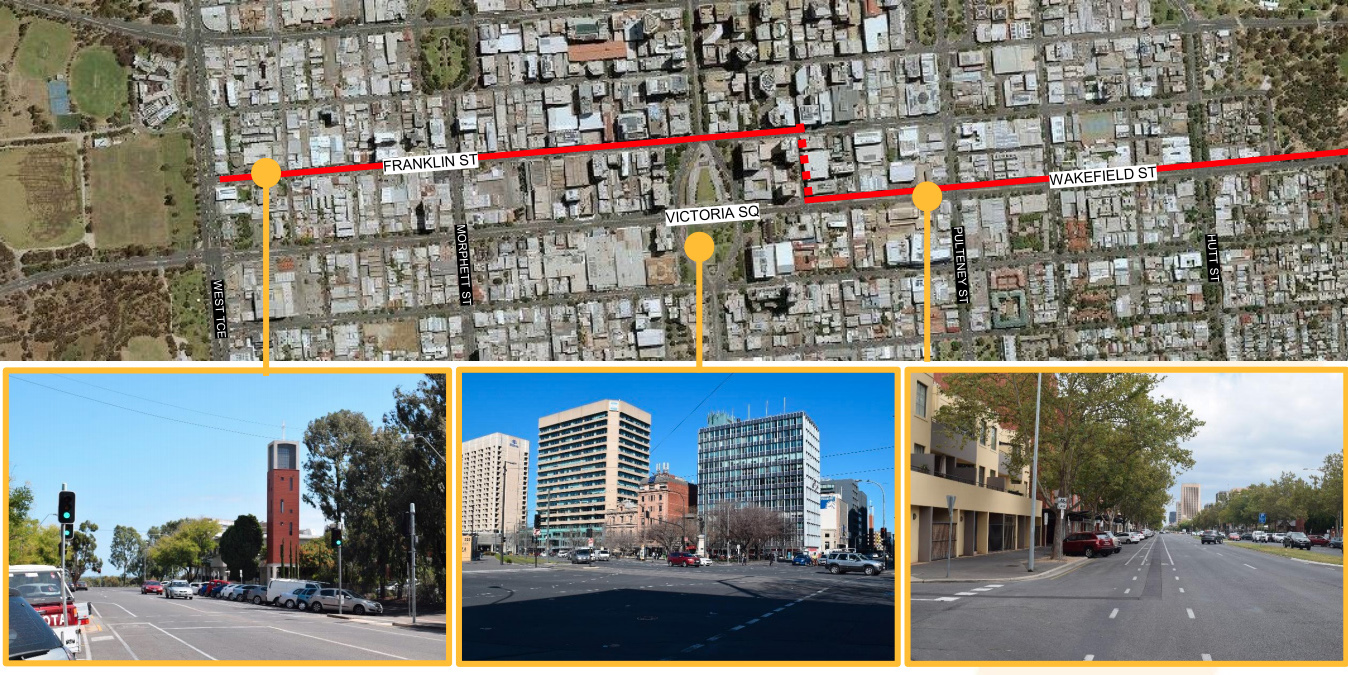 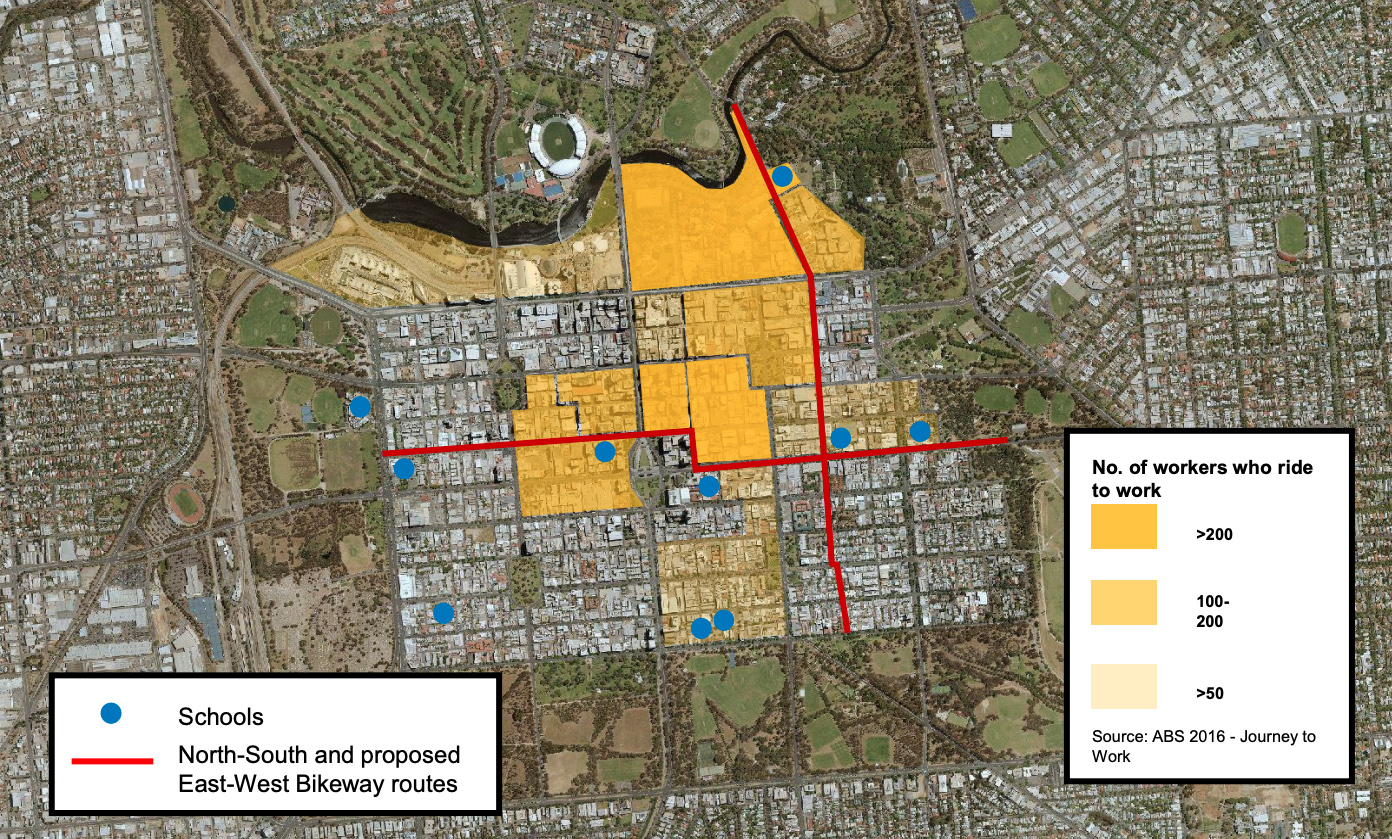 “This has been based on minimising impacts to the general traffic, reducing parking loss, easing navigation along the route for people riding their bikes, reducing bus stop interaction and obviously being able to provide a safe environment for all users,” he said.

“If you’re wanting a safe facility along these corridors that would attract people on bikes from these other corridors to that safe facility in addition to providing new trips… people would be encouraged to ride their bikes.”

To accommodate the bikeway, Keller said existing angle parking along Franklin Street, west of Morphett Street, would be changed to parallel parking, which would result in a loss of some spaces.

There would also be a “slight reduction” in parking spaces along Franklin Street east of Morphett Street.

“Whilst we are removing some parking in these sections, existing paid parking utilisation from our parking sensors in the ground shows that during business hours, parking is utilised by between 60 and 70 per cent a day,” Keller said.

Angle parking along the eastern end of Wakefield Street would also change to parallel parking.

Keller said the council would not spend “the same level of investment that Frome Street underwent a couple of years ago” on the east-west bikeway, “however it would be functional and able to be delivered within the current budget, which is important”.

He said it would not be possible to complete the bikeway by the June 2021 deadline if the council undertook an “extensive” community consultation on the plans.

“An alternate option is… once we agree on the route… we undertake some consultation with the key stakeholders along the route.”

The council is yet to determine whether the cost of the bikeway would exceed the already-allocated $6 million.

Keller said council staff would aim to present a final report to councillors detailing the bikeway’s design and cost in December, to ensure construction could start next year.

The majority of councillors expressed support for the proposed route at last night’s meeting, with Lord Mayor Sandy Verschoor describing the plans as “really reasonable”.

“I do want to see that delivered before the deed expires and certainly I think this has been going around and around for long enough,” she said.

But Deputy Lord Mayor Alexander Hyde said the council was “putting the horse before the cart” by finalising a route before the design and cost of the bikeway is determined.

“I think that there are actually a lot of people along Franklin Street who are happy to have a bikeway and lose parking for it, but one of the reasons they wanted it was because of the greening aspect and the beautification aspect for their street,” he said.

“I don’t want to tick off on a route before I know what you’re putting on it.

“That’s a big part of the problem for me.”

According to the council’s data, there are over 2000 cyclists entering the east and west sides of the city each workday.

The most popular route is along Grote and Wakefield Streets, which attract a combined 950 cyclists.