An update to the council’s website states that it is “working hard to finalise negotiations so that we can share the concepts with the community early in the new year”.

It is over a year since the council signed an agreement with its chosen developer in November 2019 and three years since it purchased the dormant property in February 2018 for $34 million, with the help of a $10 million State Government grant.

The site at 88 O’Connell Street has remained vacant for over 30 years after furniture retailer Le Cornu sold the property in 1989 and a string of subsequent development proposals failed to kick off.

After purchasing the property in 2018, the council promised to construct on an “iconic” mixed-use development that would boost investment and visitation to North Adelaide.

The council is currently in a non-binding heads of agreement with the developer – understood to be local firm Commercial and General – and has signed a non-disclosure agreement that prevents the release of information to the public.

However, the council is yet to lift confidentiality on its development plans.

Asked why the council was now forecasting a 2021 deadline to release the plans, McCready told InDaily Town Hall was “still in a commercially sensitive stage of discussions whereby Council is negotiating terms and conditions of the agreement, including the design outcome”.

“That is the timeframe we’ve been working to but negotiations are working well with the proponent and we will update the community as soon as all contractual arrangements have been agreed to,” he said.

“Council and the proponent are working diligently and time elapsed to date is not significant in terms of a development of this scale and nature.” 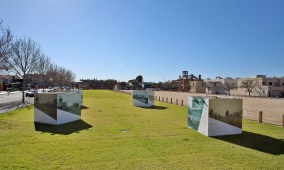 McCready said “timing is on track” for construction to begin in 2022, subject to execution of contracts.

Updated costings released to InDaily show the council has so far spent $728,0000 on progressing the development of the site and a further $396,000 on temporary activations, including car parking, public art installations and events, while the plot has remained vacant.

The total spend tips over $1.1 million.

McCready told InDaily in June that the project had not been impacted by the COVID-19 pandemic, with the developer “well placed to progress and is working towards Council’s long-term development target”.