According to an Adelaide City Council report, the SMA has proposed relaxing restrictions at the cricket oval adjoining the western side of Adelaide Oval to allow it to host events outside cricket and AFL seasons.

“Modest” unenclosed scaled seating accommodating up to 100 people is also proposed for what the SMA has named the “Village Green” event space at Oval No.2.

The proposal, which has the backing of the Park Lands Authority, forms part of the city council’s draft community land management plan (CLMP) for the park lands site – a document last revised in 2009 before the Adelaide Oval redevelopment was complete.

The CLMP, which is overdue for renewal, outlines the policies guiding the management of Adelaide Oval’s surrounds, including licensing and event restrictions.

According to the council report, the SMA last year commissioned Torrens University Australia to undertake an economic study to determine the potential benefits of relaxing restrictions at Adelaide Oval No.2 to allow the staging of events.

A report summarising the findings estimated that annual sales increases could range from $3.3 million to $30.5 million, with a base case value of $7.6 million.

It found between 11 and 106 new jobs could also be created.

Plans to expand its events offering onto Oval No.2 were not mentioned by the SMA at subsequent select parliamentary committee hearings about the Oval Hotel.

“The report concluded that allowing Village Green to host stand-alone events is likely to yield significant positive direct and indirect windfalls for the Adelaide economy,” the council report states.

“The SMA has provided a high-level operational plan outlining how events on Oval No. 2 would be managed.

“This includes matters such as communication with residents prior to the event, stage location and set-up, fencing of the site, lighting and signage.” 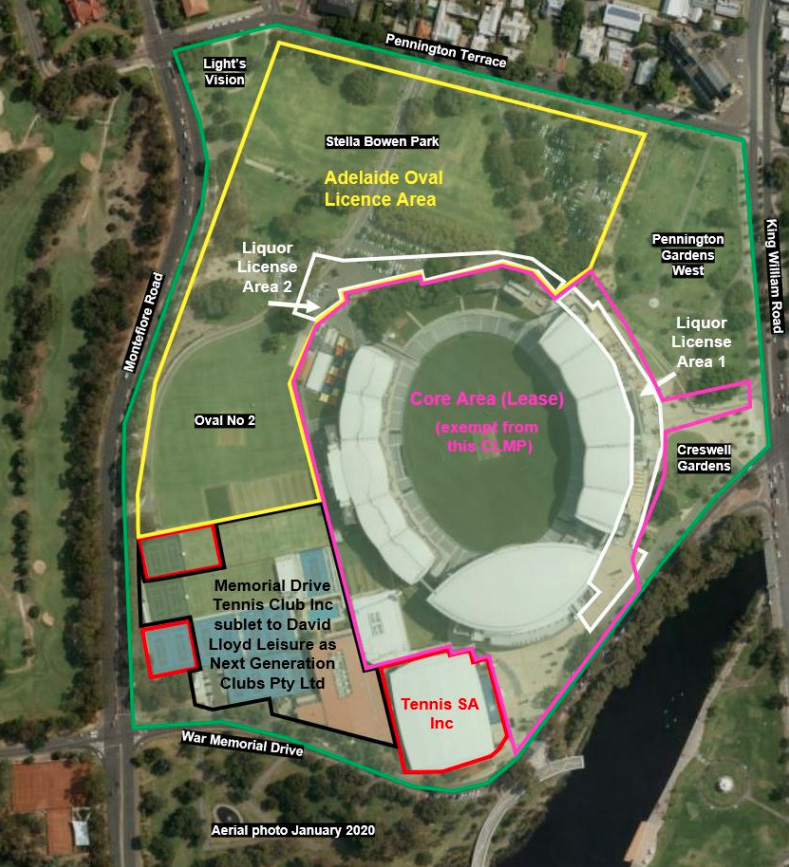 The boundaries of the Adelaide Oval Precinct CLMP area in Park 26.

The council report states “broadening opportunities for the activation” would boost patronage at neighbouring CBD hospitality and tourism businesses.

But it cites the potential disruption to the surrounding area and “some loss of community access” to the oval as downsides.

“Any impacts to the condition of Oval No.2 through additional events would be the responsibility of the SMA,” the report states.

“Due to the potential impact on adjacent residents and businesses of serving liquor in areas external to the stadium, no further extension of the liquor licence areas should be considered.”

The council’s administration has suggested it impose a series of conditions on the relaxing of restrictions at Oval No.2, including allowing no more than eight community, cultural or music events per year, with a 15,000 cap at each event.

It has also suggested that all sound delivery equipment face southwards towards the city and that the SMA ensures its events do no conflict with other city events, activities or projects “to minimise disruption to the daily life of the city”.

Oval No.2 was used as a performance venue in October 2017, when Australian rock group Midnight Oil performed to a crowd of about 15,000 people.

The council report states the event was “successfully staged” and no complaints were received by either the council or the SMA.

“Acoustic monitoring found that noise levels were kept within the acceptable range as outlined in the (council’s) event noise mitigation standard operating procedures,” it notes.

Lord Mayor Sandy Verschoor said under the draft CLMP, Oval No.2 would only be used for standalone events approved by the council’s CEO.

“It was discussed at our place (the Adelaide Park Lands Authority meeting) last night and they made some great recommendations… and that includes understanding that they’re single events and also that they work in accordance with with the Adelaide Park Lands Events Management Plan, which talks to our noise mitigation policy and also the scheduling of events,” she said.

“It would be important for the community to have their say during consultation.”

But north ward councillor Phil Martin said he was “gobsmacked by the gall of the SMA”.

“Before the dust had even settled on putting a government-financed hotel on the Oval these guys were out there commissioning an economic report to show how much money could be made if they could also get their hands on more Park Lands,” he said.

“CLMPs are supposed to be about setting high principles for the management of our Park Lands.

“This is not a CLMP – it’s the SMA’s latest scheme to make money out of the people’s Park Lands to help dig them out of a very large debt hole.”

A spokesperson for the SMA said the authority welcomed the opportunity to have input into the CLMP and it supported the draft version of the plan.

“The council executive has engaged with Adelaide Oval in a very positive way to seek our feedback on how the Adelaide Oval No 2 space can be best managed and used,” the spokesperson said.

“We look forward to continuing to work collaboratively with Council on this, following the finalisation and approval of the new plan.”

Oval No.2 was last expanded in 2015 to accommodate first-class cricket.

The Adelaide Park Lands Authority last night voted in support of the draft CLMP, but recommended that events at Oval No.2 only run for a maximum of one day.

Deputy Lord Mayor Alexander Hyde said he would call on the council to adopt the authority’s advice when it votes on the draft CLMP at a meeting on Tuesday night.

The plan must then receive approval from Infrastructure Minister Corey Wingard, before it is released for public consultation for a minimum of 21 days.