The State Commission Assessment Panel yesterday granted development plan consent to developer CEL Australia to demolish the circa-1920s heritage façade of the former Bank of South Australia building at 51 Pirie Street and build the Hyatt Regency Adelaide Hotel – the first Hyatt-branded hotel in Adelaide in over a decade.

The panel agreed that the hotel’s design was “not seriously at variance” with development regulations in the CBD, but it would defer granting full development approval until CEL Australia clarified the type of glass and cladding material it intended to use.

InDaily reported on Monday that Government Architect Kirsteen Mackay raised concerns about the glazing colour and cladding at the base of the hotel.

A spokesperson for Mackay wrote to the SCAP earlier this month to warn that the building’s base and canopy design did not warrant the demolition of the heritage-listed building and further review of the design was recommended.

“The GA’s support for the removal of the heritage facade is contingent on the new proposition providing a significant contribution to the streetscape and achieving a high-quality design and material outcome, which has not yet been demonstrated,” the spokesperson wrote.

The Adelaide City Council also raised concerns in its submission that the revised hotel design “will make considerably less contribution to the city at the expense of… the local heritage place”.

The city council’s place director Klinton Devenish today said there were “no avenues available to Council to challenge SCAP’s decision”.

But he said the council was “excited about this addition to the city that will provide a significant boost to the local economy”.

CEL Australia executive director Robert Lee told InDaily this morning he was unable to comment on the development plan consent as he was yet to receive official correspondence from the SCAP.

However, he defended the decision to demolish the former bank building, saying CEL Australia originally intended to incorporate the heritage façade into the hotel’s design but architects advised that it was not possible.

“We had a consultant from DAS Architects advise us and they tried to work around it, but they came back and said it wouldn’t work with the heritage,” he said.

“There was a variety of reasons… different levels and it was hard just keeping the façade because that was the only part of the building that was heritage listed.

“In the end it just wouldn’t work.” 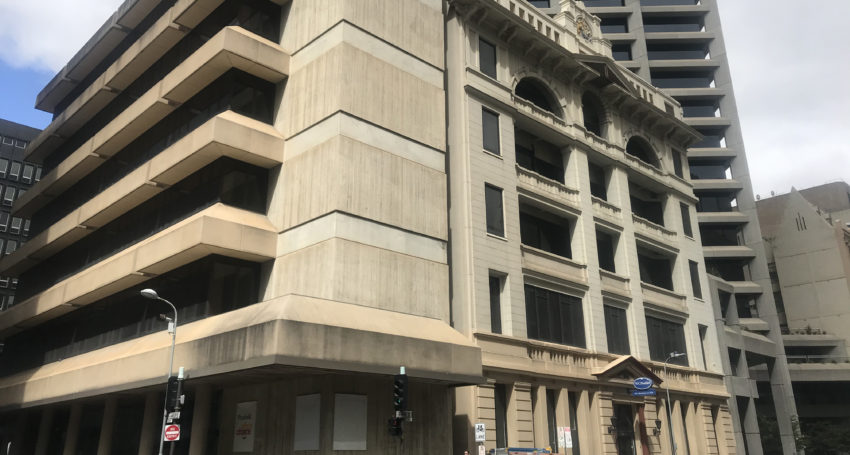 The heritage-listed former State Bank facade with 1980s addition on the side. Photo: Stephanie Richards/InDaily

A 1980s redevelopment stripped the former bank building of all internal finishes and added what the State Commission Assessment Panel (SCAP) described as a “brutal concrete express-form addition” to the eastern side.

Lee said the hotel’s modern design would “definitely justify” the demolition of a heritage place as it incorporated high-grade materials and would improve the streetscape.

“The Hyatt Group has what we call the GTS – the Global Technical Standard – that we abide by and everything that we do in there has to be in accordance with the standards,” he said.

“If you look at how we are going to activate the public realm on the ground floor and also on the quality of the materials that we use, it’s all in relation to the global technical standards.

“All hotel operators have standards, but we have to follow the global technical standards that are actually above local standards.”

Construction is slated to start in the first half of next year, but the hotel’s opening date has been pushed back to late 2023.

Asked whether the project had been impacted by the COVID-19 pandemic, Lee said: “nobody knows”.

“If you asked me whether it has been impacted by COVID currently, of course it has because there’s obviously fear that going forward whether COVID is going to continue when we open,” he said.

“It’s also impacted us in terms of how we plan the layout because of social-distancing requirements and also taking into account the COVID rules.

“In South Australia the Government has done a very good job and I think that looking at the way things are going we are confident that COVID will not be something that we will need to worry about in 2023.”

CEL Australia in June decided to cut back the number of rooms from 295 to 285, with the number of floors dropping from 28 storeys to 22.

Two storeys of private suites as well as three levels of car parking and an indoor plant room had also been axed, but the property gained an event space, market café, swimming pool, fitness facilities and rooftop bar.

At the time CEL Australia executive director Robert Lee said the changes were made to make the building “more efficient” and to incorporate government feedback.

About 320 jobs are expected to be created during the hotel’s construction, with between 140 to 160 staff to be hired once the hotel is operational.