Lord Mayor Sandy Verschoor has called a special meeting for this Thursday to discuss starting formal council meetings at 2pm instead of 5.30pm to allow for an “appropriate” and “reasonable” finishing time.

It follows a decision in December to scale back the number of monthly council meetings from two to one – resulting in eight-hour-plus meetings that finish as late as 3am.

The council has also restructured its agenda to include confidential items in the middle of meetings, meaning elected members’ motions and questions are now discussed at the end, often after midnight.

“This measure would also reduce the cost of servicing the meeting by reduced overtime payments for critical relevant staff and security contractors,” the report states.

“Public participation will be guaranteed through continued online streaming of meetings and accommodating deputations on the order of the agenda to suit participants.”

Verschoor told InDaily she hoped councillors with full-time jobs could accommodate earlier meetings in their schedules.

“Most members allocate the time on Tuesdays for council business,” she said.

“The earlier start would require three business hours on one day a month scheduled ahead of time for the entire year.”

Under the Local Government Act, councils can only start meetings before 5pm if the change is supported by all elected members.

Councillor Anne Moran told InDaily this morning she would vote against Verschoor’s proposal, describing it as “ridiculous” and “absolutely untenable”.

“It’s still going to be a 10-hour meeting that runs into the late evening,” she said.

“An easier solution would be just to return to two meetings per month.”

She said she was paying a lawyer to review the Local Government Act to determine the legality of the meeting structure, following an email she sent to Verschoor and CEO Mark Goldstone last month threatening legal action if the length of meetings was not cut back.

Area councillor Arman Abrahimzadeh said any councillor who voted against an earlier meeting time would “continue to put council staff and those of us elected members in full-time work at risk”.

He said elected members expected that their council duties would at times interfere with their day jobs.

“I’ve got more than a full-time job but being an elected member, being a community leader, it’s expected that it will eat into your working time, your weekends or your holidays.” 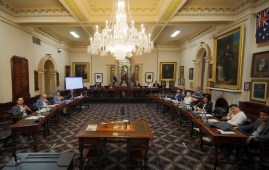 Deputy Lord Mayor Alexander Hyde said council meetings ran into the early hours of the morning because some councillors chose to lodge “redundant” and “copious” motions that “are obviously going to be unsuccessful”.

“The new meeting structure is actually working better for our administration, it’s just that some councillors choose to deliberately try and delay the meetings to make a point.”