The council says it is considering all options for the Aquatic Centre, including redeveloping the existing 50-year-old facility or relocating it elsewhere in the CBD or North Adelaide, following the Adelaide Football Club’s decision to withdraw its $65 million bid to replace the centre with a new training and community complex after suffering an economic hit from COVID-19.

According to the council, the current centre, which runs at an annual operating deficit of $2.5 million despite attracting over 700,000 yearly visits, is reaching the end of its lifecycle and requires “significant investment” over the next ten years to make it more commercially viable.

A report presented to councillors last night outlines four redevelopment options, ranging from $16 million to undertake renewal works to the existing Jeffcott Terrace facility, to $55 million to build a brand-new centre equipped with indoor and outdoor swimming and recreation spaces.

The report also reveals potential sites for a new centre, including the existing Park 2 (Padipandinyilla) site in North Adelaide, Park 24 (Tambawodli) near the railway tracks opposite ETSA Park and Santos Stadium, or Park 26 (Tarndanya Womma) on War Memorial Drive next to Adelaide Oval and the adjacent tennis and health club facilities.

The Adelaide Oval site has also been flagged as one of two major locations being considered for a prospective new city stadium complex.

The report states a redeveloped Aquatic Centre could boost visitation by 40 per cent.

“Lifestyle, wellness and dare I say recreation is actually changing within the city,” he said.

“You’re seeing more of a demand for wellbeing and allied services coming in to recreational facilities above and beyond your traditional recreation requirements, be it a pool, gym and so forth.”

The cheapest redevelopment option proposed by the council is to keep the “status quo” and renew the existing facility at a cost upwards of $16 million.

That option is considered the most risky as it could leave the council exposed to future costs to replace ageing facilities.

The second-cheapest option – Example A – would cost over $36 million to reconfigure the existing centre by replacing the western grandstand, relocating the entry and repurposing the dive pool into a learn-to-swim pool.

Consultant Warren Green described that option as “quite a challenging and difficult renewal process” that would leave a “gap between the redevelopment process and a contemporary development”.

Example B – priced at up to $35 million – proposes the existing centre be demolished and replaced with a brand-new indoor facility.

The most expensive option – Example C – would cost $55 million and cover 24,600sqm, and feature both indoor and outdoor swimming pools, a spa, sauna, and gym. 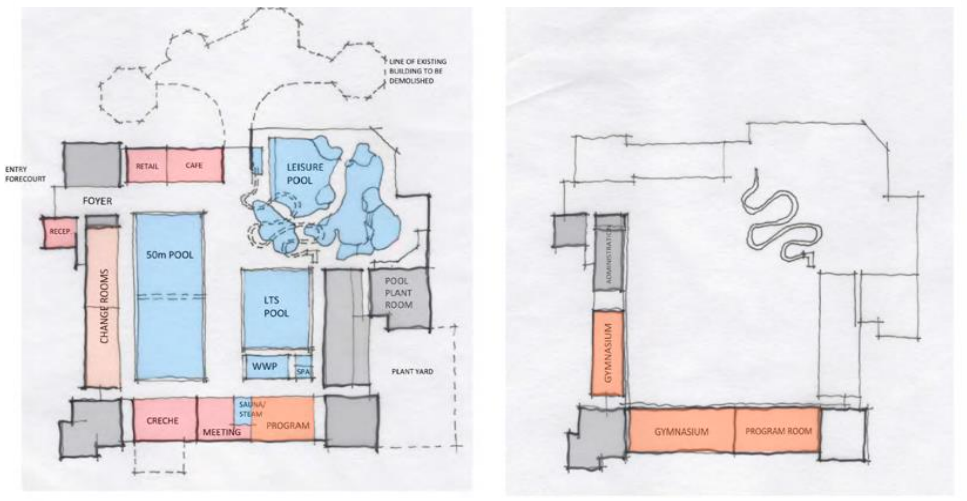 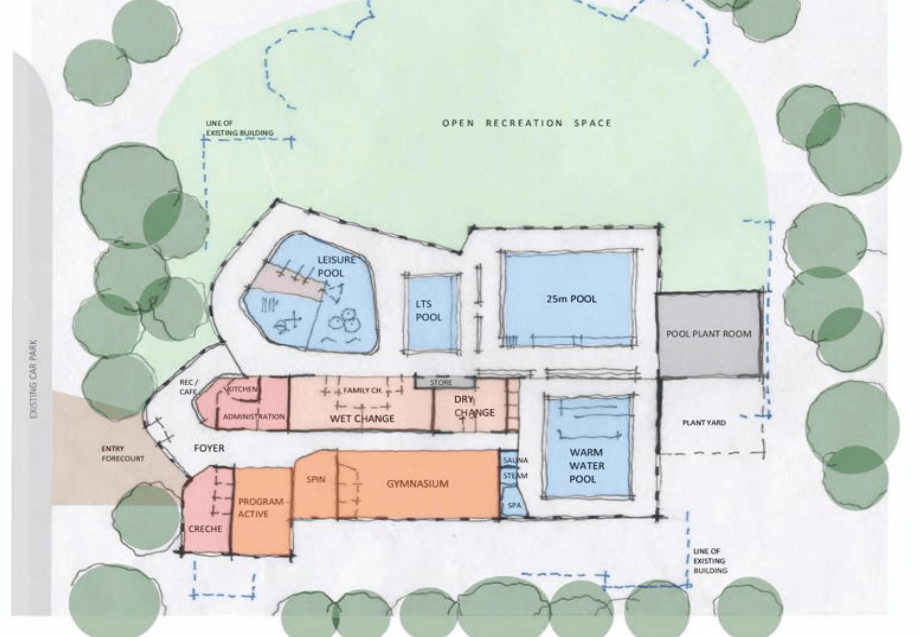 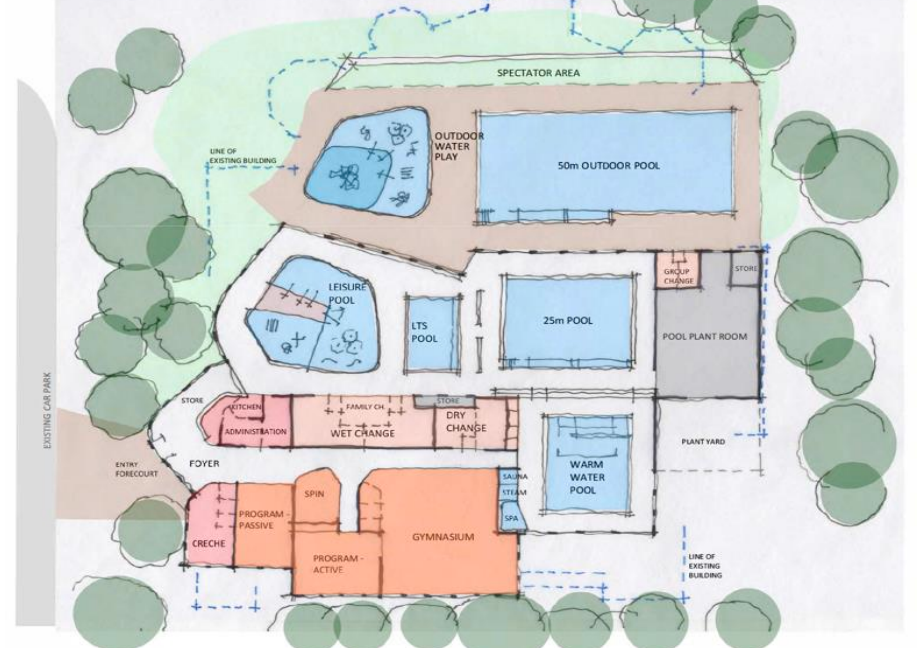 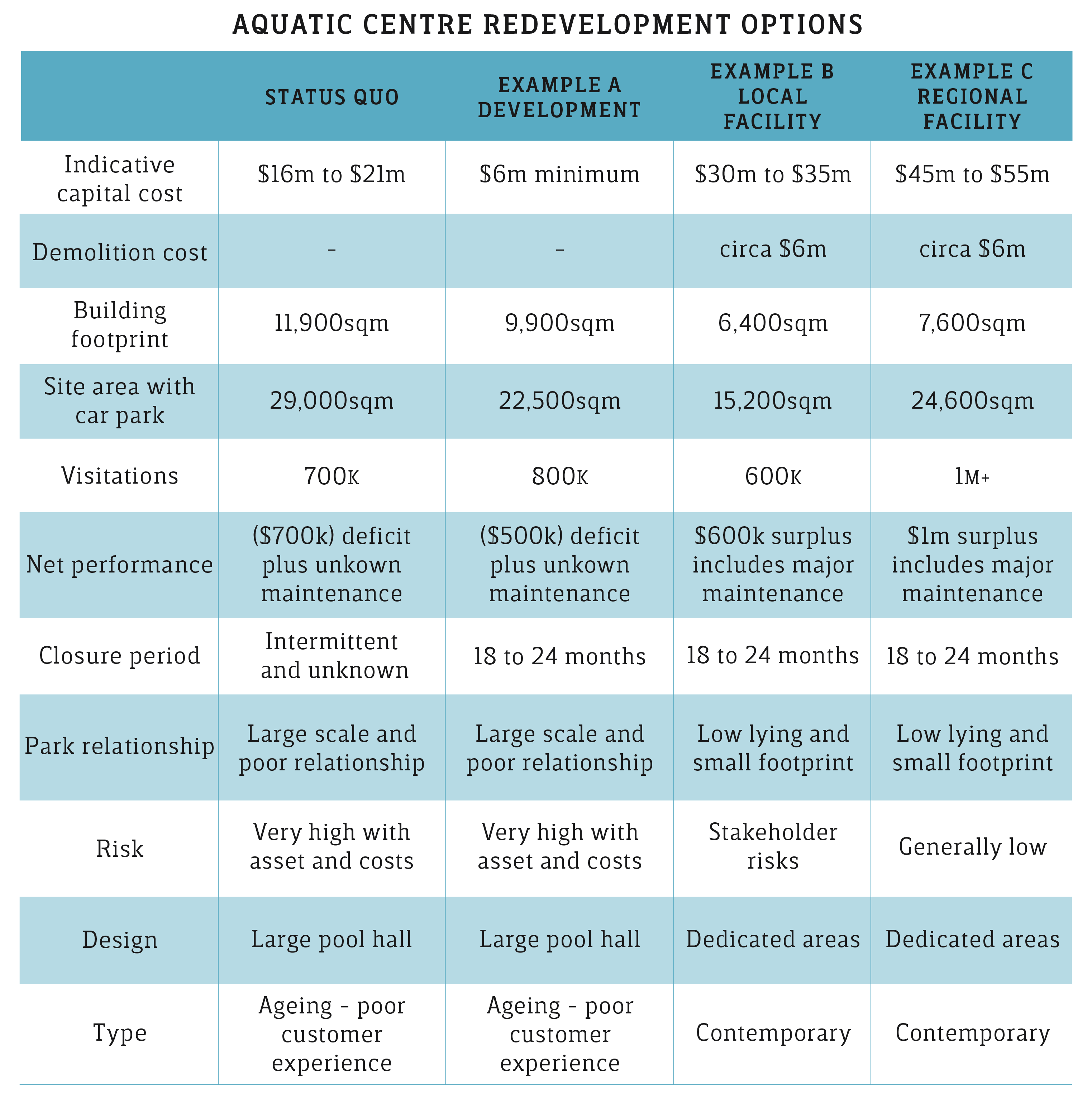 Lord Mayor Sandy Verschoor proposed the existing centre remain open while a brand-new facility is built on the corner of Barton Terrace west and Prospect Road, opposite the Caledonian Hotel and further west of Park 2.

She said relocating the aquatic centre closer to O’Connell Street could boost patronage to businesses along the retail and hospitality strip.

“You can do the build while still operating the (existing) facility,” she said.

“Obviously we would still have demolition but that would be returned to park lands at the end of it.”

“A new swim facility as part of an integrated development on that site, centrally located, equidistant to north and south, all public transport modes including tram, which would eventually go to North Adelaide, I think would be an interesting option to explore,” he said.

“We could exploit the air space above the centre without the contestation of developing park lands footprint.”

Central ward councillor Jessy Khera said councillors needed to be “absolutely realistic about the current economic situation” of the council, which is facing an estimated operating deficit of $21 million next financial year after losing over $9 million in revenue following COVID-19.

McCready said the council would “certainly be attempting to attract funding” from the state and federal governments to help it build a new centre as the council grapples with the economic fallout of COVID-19.

The call for third-party support was echoed by Verschoor, who warned that the State Government did not include funding for a new aquatic facility in its sports infrastructure plan.

She said if the council reached a decision on the future of the aquatic centre “sooner rather than later” then the state and federal governments, and surrounding councils, could be open to providing funding.

Deputy Lord Mayor Alexander Hyde proposed that the council pitch the aquatic centre as a facility “in dire straights” and in “desperate need of repair” to help secure state and federal funding.

“We need to make the point to them and other levels of government that we need money and without their support we will only get a centre that will deliver reduced services,” he said.

Federal Member for Adelaide Steve Georganas told InDaily earlier this month that he would prioritise securing Commonwealth Government funding to redevelop the aquatic centre in the lead up to the 2022 election.

The Labor backbencher said he wrote to Prime Minister Scott Morrison and Treasurer Josh Frydenberg earlier this year asking for funding, but was told it was a State Government matter.

“The most important thing for me is that the community who currently use the park lands and those facilities will continue to do so, and open spaces are currently retained as they are,” he said.

“We’ve had so much encroachment on our park lands, so I suppose the Crows pulling out is a blessing in surprise basically.”