InDaily reported in August last year that the Hyatt name would return to Adelaide for the first time in a decade, with the announcement of a 28-storey, $180m hotel to be built on the site of a local heritage-listed building the Adelaide City Council didn’t want demolished.

The 295-room Hyatt Regency Adelaide Hyatt was approved for a site currently shared by the five-storey former Bank of South Australia building at 51 Pirie St, near the Adelaide Town Hall.

In February, InDaily reported construction of the the hotel had been delayed, but remained on track for an early 2023 opening.

Works were due to have begun earlier this year, but CEL Australia executive director Robert Lee today told InDaily construction had been pushed back to early 2021.

He said the hotel would have 285 rooms, rather than the 295 originally planned, with the number of floors dropping from 28 storeys, to 22.

Two storeys of private suites as well as three levels of car parking and an indoor plant room had been axed, but the property would have an event space, market café, swimming pool, fitness facilities and rooftop bar.

Lee said the project’s total was expected to cost between $150 million and $160 million, rather than the $180 million previously estimated.

“The whole building has been made more efficient,” he said.

“When you develop, you look at how to operate efficiencies and incorporate government comments.”

The hotel will be built on the site of the current building, a former bank built in 1927 with a local heritage-listed frontage. 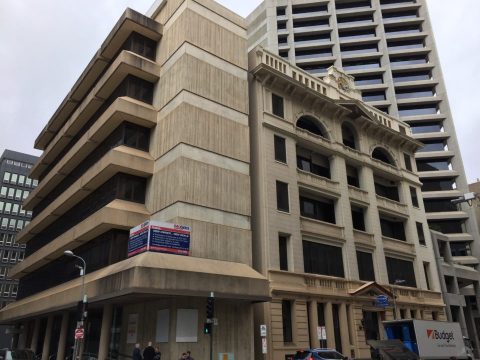 Despite council opposition, SCAP granted permission in April last year for the old bank building and frontage to be demolished for the new hotel, saying changes to the site over the years had “diminished the integrity of its original heritage value”.

In a letter to SCAP in March last year, the council’s planning assessment manager Rebecca Rutschack warned demolition of the listed building was not consistent with development plan requirements.

“There are numerous provisions within the relevant Development Plan which call for the retention of this Local Heritage Place (Townscape),” Rutschack wrote.

“Demolition of the listed building fabric is therefore not consistent with the clear intent of the Plan.”

InDaily contacted SCAP and Hyatt but is yet to receive a response.