The centre, which supports more than 200 people experiencing homelessness each year, has applied for a three-year $150,000 grant from the city council to deliver its “Pathways to Wellbeing, Engagement and Connection” project, which provides education and recreation activities to rough sleepers.

According to the project description, the grant money would be spent “connecting clients with a sense of belonging, raising self-esteem and resilience as they rebuilt their lives” to help reduce the scourge of homelessness in the city.

Council staff recommended that the Hutt Street Centre grant application be approved on the basis that it would provide “clear and robust outcomes for the city community”.

They also said the Hutt Street Centre had a “high-quality” track record of delivering programs and there was a “clear need in the community” for its work.

He said the Hutt Street Centre was “essentially the Catholic Church” with already a “significant amount of money in the bank”, and that an analysis of the centre’s finances was warranted to ensure the council funding was best spent.

“Are we basically not giving a substantial amount of money to what is arguably the most powerful business in the street?” he asked.

“Should there perhaps be reconsideration of assessment criteria to actually assess needs if we are granting sums of money to very substantial businesses?

“I think that now more than ever before given the COVID crisis and the budget constraints, it’s important that we all have some information to base the monies that are handed out.”

Deputy Lord Mayor Alexander Hyde, who last month proposed that the council commission a legal review of the Hutt Street Centre’s compliance with land use regulations, said he was “concerned” that the council did not conduct “checks and balances based on need” when it assessed grant applications.

“If an organisation’s liquid assets can go up – acknowledging that they’re (the Hutt Street Centre) a not-for-profit, but they’re still making an operational surplus or profit of almost $1 million over a 12 month period and we the council are going into millions and millions or tens of millions of dollars worth of debt in order to fund such programs – it doesn’t really seem equitable,” he said.

“It may be all well and good to fund such programs, but perhaps there is an organisation that is more in need of that funding.”

Hyde told InDaily this morning that the Hutt Street Centre could fund the Pathways to Wellbeing, Engagement and Connection program from its own profit.

“We are a local government and they are making more money in profit than we are,” he said.

“I’m not saying that we shouldn’t find this program, but there is no means testing attached to it and there should be.

“It’s more a question of is this equitable?”

Hyde said other homelessness support organisations, such as the Adelaide Day Centre, “spring to mind as organisations that could be in more need of Council funding”.

It really is starting to look like a vendetta

“We have assessed the (Hutt Street Centre) application on the basis of the merit and with consideration to the grant process,” she said.

“I understand it would require a council decision to change the process.”

Hutt Street Centre CEO Chris Burns told InDaily this morning the council approached the organisation to apply for the grant.

“They sent us a letter saying we are offering the grant and we would encourage you to apply for it,” he said.

“We co-fund it (the project) with the council and have been doing so for a few years now.

“We are a charity. We generate funds and we invest the funds back into the operations of our services to help people experiencing homelessness.”

Burns said the Hutt Street Centre’s financial records “looked healthy”, but about $3 million would soon be spent on a redevelopment of its premises.

He said it was “prudent management” to ensure a charity had some money spare to ensure it could continue delivering services during tough economic times.

“The project this money will be used for is about giving back to the community,” he said.

“We have a green gang that goes out every Friday and cleans the streets.

“That’s an opportunity to get them (the Hutt Street Centre clients) together and give back to society and engage with the community in a positive way.”

Area councillor Robert Simms said it was “inaccurate” to describe the Hutt Street Centre as a business.

“It’s an organisation that assists vulnerable people in the community,” he said.

“I’d urge councillors to keep that in mind and not to politicise a grants process by trying to take money away from organisations that are providing support at this time.”

But Khera retorted that businesses could be classified as both “for-profit” and “not-for-profit”.

Lord Mayor Sandy Verschoor welcomed a review of the council’s grants policy in light of the COVID-19 crisis.

“We all know the next couple of years are going to be really difficult and it is a period of time where all of us as councillors need to be really focussed on bringing our city back to life and supporting those community organisations who are delivering our services across our city for those most vulnerable,” she said.

It follows the council’s controversial decision last month to commission a legal review of the Hutt Street Centre to determine the impact of its land use on neighbouring businesses and residents.

Some neighbouring traders and residents argued that the homeless service provider attracted more clients now than in 1995 when the land use regulations were set and, as such, the renovations would facilitate an unlawful expansion.

They also argued the Hutt Street Centre’s clients regularly engaged in anti-social and criminal behaviour, a claim both the centre and SA Police deny.

The decision to commission a legal review has been widely criticised by some members of the community, including Opposition Leader Peter Malinauskas, who pledged to explore “all parliamentary options for intervention” if the council did not rescind what he described as an “abhorrent and deplorable” decision. 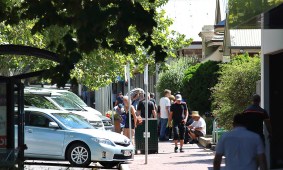 Simms has lodged a recession motion for next Tuesday’s meeting, describing the impending vote as a “moral test for the council”.

During last night’s meeting, north ward councillor Phil Martin – who voted against commissioning the legal review – asked if the council could have a “truce” on the Hutt Street Centre.

“It really is starting to look like a vendetta,” he said.