Councillors Robert Simms, Phil Martin and Helen Donovan have written to the council’s CEO Mark Goldstone requesting a special meeting be held on Thursday to consider a rescission motion lodged by Simms.

If successful, Simms’ motion would revoke the council’s resolution to commission an “independent and comprehensive legal review” of the Hutt Street Centre’s compliance with land use regulations.

The resolution, which passed at Tuesday night’s council meeting following a push from Deputy Lord Mayor Alexander Hyde and with the support of the Team Adelaide majority faction of which he is credited as leading, also asks for the legal review to determine the impact of the Hutt Street Centre’s land use on neighbouring businesses and residents.

Some neighbouring traders and residents argued that the homeless service provider attracted more clients now than in 1995 when the land use regulations were set and, as such, the renovations would facilitate an unlawful expansion.

The Arab Steed Hotel, the owner of the St Andrews Medical Centre building, Colorectal SA and restaurants at 242 Hutt Street hired lawyers to argue against the upgrade, while the Hutt Street Traders Association said it “vehemently opposed” any redevelopment, as “what happens in southern Hutt Street impacts the brand, amenity and prosperity of the whole street”.

InDaily reported yesterday that Opposition Leader Peter Malinauskas had pledged to explore “all parliamentary options for intervention” if the council did not rescind what he described as an “abhorrent and deplorable” decision.

Simms and Martin were the only councillors who voted against the decision at Tuesday’s meeting, while Donovan was not present for the vote.

According to the council’s standing orders, the CEO must call a special meeting if it is requested by at least three elected members.

However, the meeting may not proceed if a quorum is not reached.

In an email to councillors and Goldstone this morning – seen by InDaily – Simms wrote the council’s decision to commission a legal review of the Hutt Street Centre had been “rightly condemned” by the community.

“It threatens the capacity of the Hutt Street Centre to provide vital support to our city’s homeless during this deepening economic crisis,” he wrote.

“I believe that urgent action is required to prevent Council spending funds on this unnecessary and unethical review.

“This special meeting is an opportunity for Council to change course.”

Simms told InDaily that calling a special meeting was necessary, as the next general council meeting will not be held until June 9.

“By that stage a month would have passed and we would have missed the opportunity because it (commissioning the legal review) would have already been actioned,” he said.

“This way – by calling a special meeting – it puts a pause on it.”

But Hyde, a Hutt St resident, described Simms’ move to call a special meeting as a “political stunt to inflame tensions and politicise the issue”.

“The entire point of this completely independent review is to answer a question of law once and for all so we can end division and so the community can put this behind us and heal,” he said.

“It is not a question of whether you support homelessness services in principle.

“Of course everyone believes homelessness services are vital, and over this term, on my own initiative, I’ve supported them.

“However, I won’t simply put the matter in the too-hard basket because political adversaries wish to manipulate the matter and twist it into something it’s not.”

Moran, who during the last council term spearheaded calls to install CCTV cameras to combat what she claimed was a spike in criminal behaviour stemming from the Hutt Street Centre, told InDaily this morning she was undecided about whether she would support Simms’ rescission motion.

“I am no fan of the Hutt Street Centre and have always voted for them to be moved somewhere else, and I continue to believe that,” she said.

“But, this is a challenge to the planning system – not anything to do with whether you’re a supporter of the Hutt Street Centre or not – and I’d be very surprised that it had behaved in any way unlawfully. 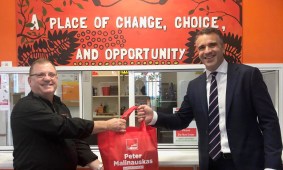 “Having spoken to proponents on either side it seems like the unlawfulness is historic from a change of use, so I’d really need to have a look back.”

Moran wrote to Lord Mayor Sandy Verschoor this morning saying she would lodge a motion calling on Hyde to resign from his role as Deputy Lord Mayor due to the “reputational damage Mr Hyde has brought to our council”.

It followed comments made by Hyde in InDaily yesterday stating Malinauskas “appears to be suffering relevance deprivation”, and claims during Tuesday night’s council meeting that the SA Police union was “struggling to find relevance”.

Moran told InDaily her motion would “probably fail” but she wanted to lodge it because “he (Hyde) is clearly trying to make a name for himself at the expense of the council’s reputation”.

Hyde said his comments were “completely in line with Council’s decisions at its meeting”.

“This is more petty politics from Anne and her faction,” he said.