Mackie, a Hindley Street bookseller who went on to hold senior roles across various State Government agencies, campaigned on a culture and business platform, promising to advocate for the establishment of a public art trust and a reduction in red tape for festivals and events.

He also called for the development of a 30-year park lands landscaping plan and for reform to local precinct groups in the city.

Mackie, who previously served as an elected member on the city council between 2000 and 2003, won with 28.2 per cent of first preference votes, followed by Gouger Street Traders Association President Wayne Chao, who received 20.2 per cent and former Property Council chief executive Nathan Paine, who received 16.8 per cent. 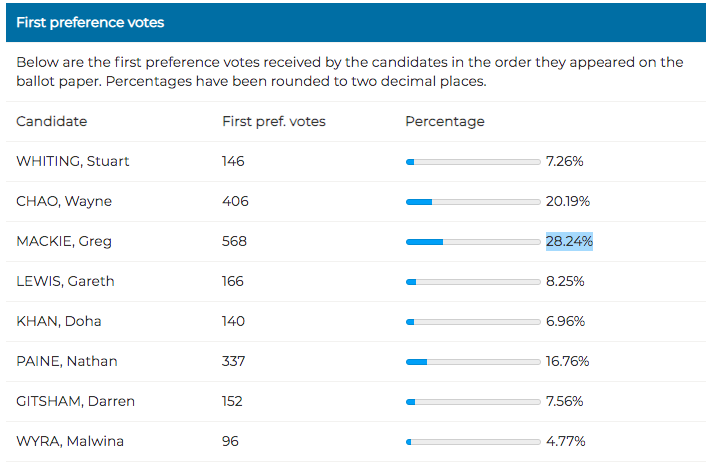 In a statement, Mackie said he was “delighted” to claim victory following “the many challenges of this unique pandemic election”.

“To be a good representative, an elected member needs to put aside sectional interests and serve – not the other way around,” he said.

“I look forward to returning to this important role in civic society – and do so respectful of the fact that it affords me a platform from which to share ideas, to participate in vital debate, and to properly engage with a diverse group of citizens.”

He told InDaily his first priority as a councillor would be to “come up to speed very quickly with the rapidly deteriorating economic position that the City of Adelaide finds itself in, in light of the COVID-19 economic downturn”.

“I guess I’m coming into this position as one of 11 (elected members) – 12 including the Lord Mayor – who are going to have to make some very, very important and careful decisions in order to protect the financial sustainability of the corporation of the City of Adelaide, but also to do this in a matter which is as socially equitable as possible.”

“As a successful small-business owner, respected public servant and former councillor, Greg Mackie will bring a great depth of experience to the City of Adelaide at a time when our communities are facing significant challenges,” she said.

“I look forward for welcoming Greg to the chamber in June and to working with him to create a city full of dynamic experiences.

“I’d also like to thank all the candidates for putting themselves forward for election and wanting to represent their communities.”

Abiad, who left the council to pursue a career in Saudi Arabia, was credited as a key instigator of the Team Adelaide majority faction in the lead up to the 2018 local government elections.

His departure left the faction without a working majority at Town Hall, meaning Mackie will effectively act as powerbroker on the council – choosing to side with either of the two main voting blocs or remain independent.

“I make decisions based on evidence and I have an ability to relate to all people,” he said.

According to the Electoral Commission, only 19 per cent or 2193 eligible voters returned their ballot papers for the non-compulsory postal vote.

Mackie said described the return rate as “not a healthy situation”.

“It will receive my attention along with the significant agenda that is before the council in these challenging times,” he said.