The front room of Anne Moran’s 1800’s North Adelaide mansion is decorated like a shrine to her career as a city councillor.

Lining a wooden cabinet sitting on top of an animal hide rug are piles of old photographs, framed certificates and a name plaque that used to sit on her desk in the council chamber.

“I’ve got about millions of photos over the years,” the area councillor says while perusing through shots of her and her former colleagues at civic events.

“Every time I’ve run for Council I’ve promised my husband that this will be the last one.

“I kind of get sucked in to the election and I’m scared all the way through, but there’s this real drama of it all and I just haven’t been able to resist it each time.”

Long-branded North Adelaide’s queen NIMBY, she has gained a polarising reputation through the media and in the council chamber, where she is known to speak her mind no matter the consequences.

This term alone she was subject to a code of conduct complaint after allegedly calling a rival councillor a “dickhead”, and was involved in a highly-publicised heated exchange with another elected member in the Town Hall corridors.

But despite her outward steely resolve, the mother of three still finds the rough and tumble nature of local government at times difficult to endure.

“I’m not quite as tough as they think,” she admits.

“I don’t enjoy participating in guerilla warfare, I don’t like aggression, I don’t like losing my temper – and I have done that and I shouldn’t.

“I’d much rather be working with the other councillors in a collegiate way, but I don’t feel that we’re doing the best for the city at the moment.

“All that remains is for me to be a little aggressive and try to point out the wrongdoings.”

Moran – a retired high school English and history teacher whose past students include former Premier Jay Weatherill – never envisaged a career for herself as a politician.

I inherited a reputation as another snotty North Adelaide girl thinking that she can keep her luscious fields to herself and doesn’t give a shit about the rest of the city.

Her foray into political activism started in the early 1990s as a 30-something-year-old, when she joined the doomed campaign to save the old bluestone House of Chow building at the corner of Hutt and Wakefield Streets.

The building, which was located next to Moran’s anaesthetist husband Pat’s practicing rooms, was eventually demolished in 1991.

“I hadn’t been very active in heritage protection at all, but it was just such a beautiful house – very similar to this house actually,” she says, referring back to “Glena” – her home overlooking the North Adelaide golf course.

“A bunch of wives and myself picketed it for 78 days and got arrested.

“Through that I got to meet (former city councillor) Jane Rann, who’s now Jane Jose… and then there was a gap for council for this ward, so I said I’d do it.”

After a failed 1993 bid at becoming a North Adelaide councillor she eventually succeeded in the 1995 election under the Lord Mayorship of Henry Ninio, who later became embroiled in controversy with the Brown Government and was subsequently forced to relinquish his title as primary spokesperson for the council. 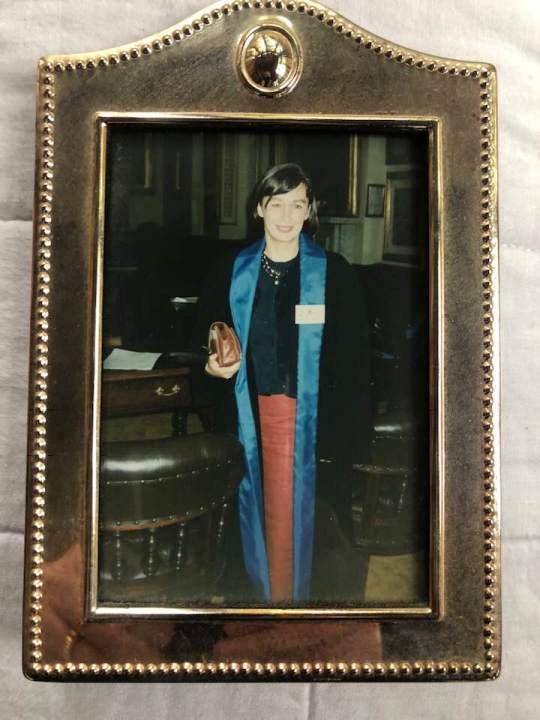 Anne Moran at her first council meeting in 1995. Photo: Supplied

Moran – then a “young gun” on the council – took over as one of Town Hall’s figureheads tasked with speaking to the media.

“I’d only been there nanoseconds and I kind of thought, what am I doing?

“I didn’t really know any different, so I kind of just thought that’s what it was like.

“But despite that, there was really a feeling that we were a group of people running the city.”

Her rapid succession to council spokesperson marked the starting point of what would become Moran’s tumultuous relationship with the media and public.

In the early days her brand was tainted by her proximity to a lawn tennis court in the park lands, which for about 20 years was locked and used exclusively by a group of North Adelaide residents.

“Jane Rann used to live at the end of the street and when she moved out of the council they (the media) sort of segued straight to me without noticing that I was a different person,” she says.

“She was relatively wealthy and part of this club and they pegged her as this sort of tennis-playing rich girl.

“I inherited a reputation as another snotty North Adelaide girl thinking that she can keep her luscious fields to herself and doesn’t give a shit about the rest of the city.

“They used to send photographers down to see if they could photograph me playing on the tennis court.

“It was ridiculous. I don’t even play tennis.”

Moran has never been able to shake-off the narrative, despite continuing to attract the most votes on the area councillor tally each election.

Her 24-year career on the council’s assessment panel – cut short this term when she was replaced by fellow area councillor Arman Abrahimzadeh – cemented her standing as North Adelaide’s resident naysayer.

“I’ve never been able to stop that impression that I’m holding everything back, that I just sit in some sort of castle in North Adelaide and talk to the minions,” she shrugs. 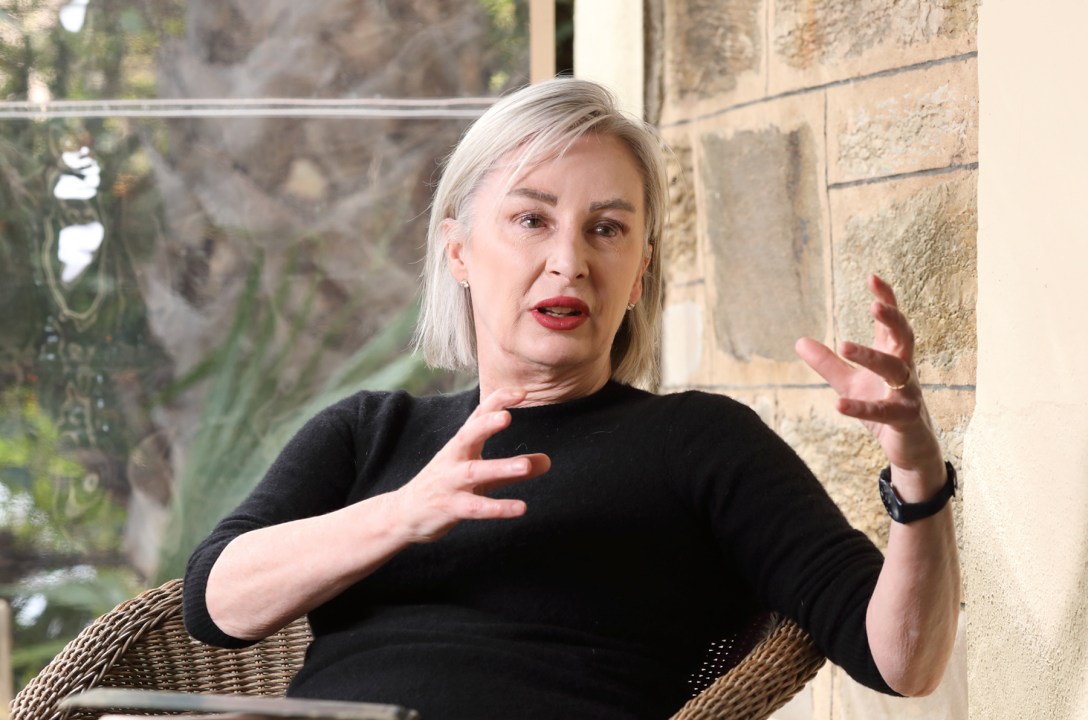 Among her proudest achievements is what she describes as “stopping gag-type behaviour”, which she most recently waged and won after current Lord Mayor Sandy Verschoor’s controversial idea of stopping elected members from speaking to the media about their motions before the publication of meeting agendas was overturned.

During the battle those in favour of the “gag order” criticised Moran for speaking too much to the media – an allegation she labels as “anti-democratic”.

“I think the suggestion is I’m a bit of a media whore throwing ideas out and not actually following through with them,” she says.

She says when she hadn’t followed up motions it was because they had not been backed or put up by other council members, or she had been asked to wait.

“Over the years I’ve gotten on well with journalists and I enjoy speaking to them, and some of the other councillors don’t like that, but it’s quite open for them to do the same.”

Moran’s frankness about her views on council matters has meant she has been able to relate to ratepayers in a way that other politicians won’t dare.

I often say to people, ‘I don’t work for the council, I work for ratepayers’

Despite admitting she has a fear of public speaking, she rarely turns down a request for media comment.

“In those days we used to get media trained – it was just hilarious – and I was used as the example of what not to do,” she laughs.

“At the training they said, ‘you get asked the question by the journalist and if you don’t want to answer that question you answer the question that you would have wanted to have been asked’.

“I can watch the Federal and the State politicians do that – repeating the same grab over and over again – which is so boring and meaningless. 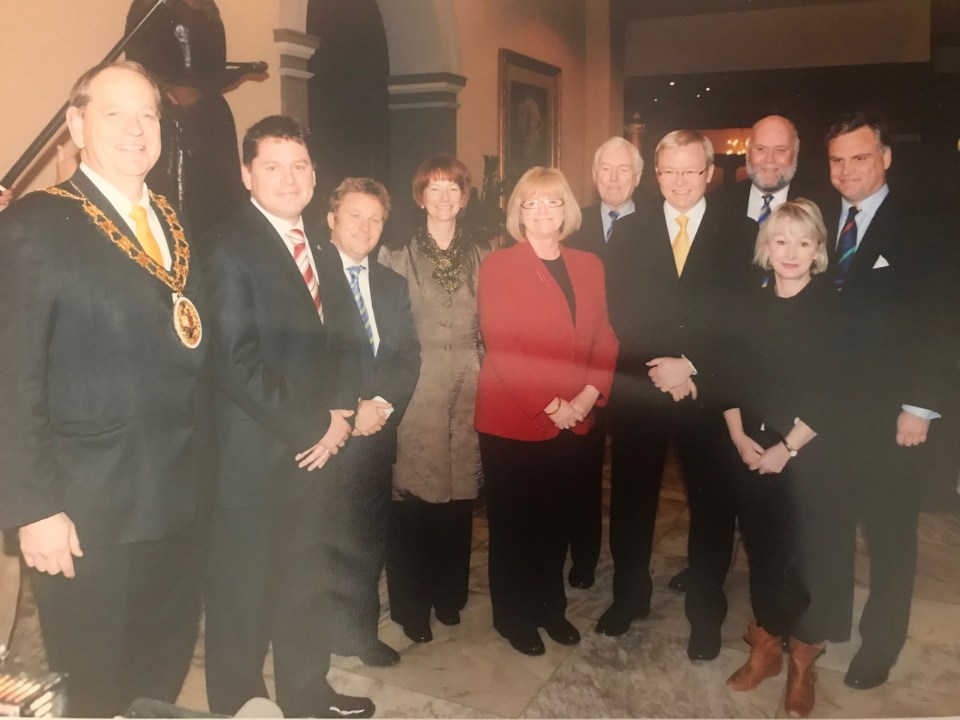 Anne Moran with former Prime Minister Kevin Rudd: “When he met me he thought I was one of the secretaries working at the council”. Photo: Supplied

But doing so has also led her into trouble, most recently when she was found guilty by the SA Ombudsman of breaching confidentiality. Moran was ordered by the council to publicly apologise for the breach in January, which she is still yet to do.

“I think councillors should be divisive, I think they should be able to speak their mind and I think argument and debate is good because we all represent different sectors of the community.

“I often say to people, ‘I don’t work for the council, I work for ratepayers’.”

Promoting women’s representation in local government is one of Moran’s key priorities.

Despite the city council achieving gender parity in the last term, there are currently only three female councillors out of ten – not including Sandy Verschoor as the Lord Mayor.

In her early days, Moran successfully lobbied to have the council pay for elected members to have their children babysat during meetings. This term, she has passionately advocated for the council to ease planning restrictions to allow more childcare facilities to be built in the city.

But Moran says sexism still holds some women back from a career in local government.

“The casual sexism is a bit like being the frog in the boiling water – you get used to it,” she says.

“I used to go to council meetings to watch the councillors before I ran and I remember saying to Jane Rann, ‘why do you put up with that abuse?’

“I said, ‘but you’re leaving a legacy of women following you that’s hard to match’.

“I’d like to leave Council in a better way so that there are more women who feel they’re up to the job.” 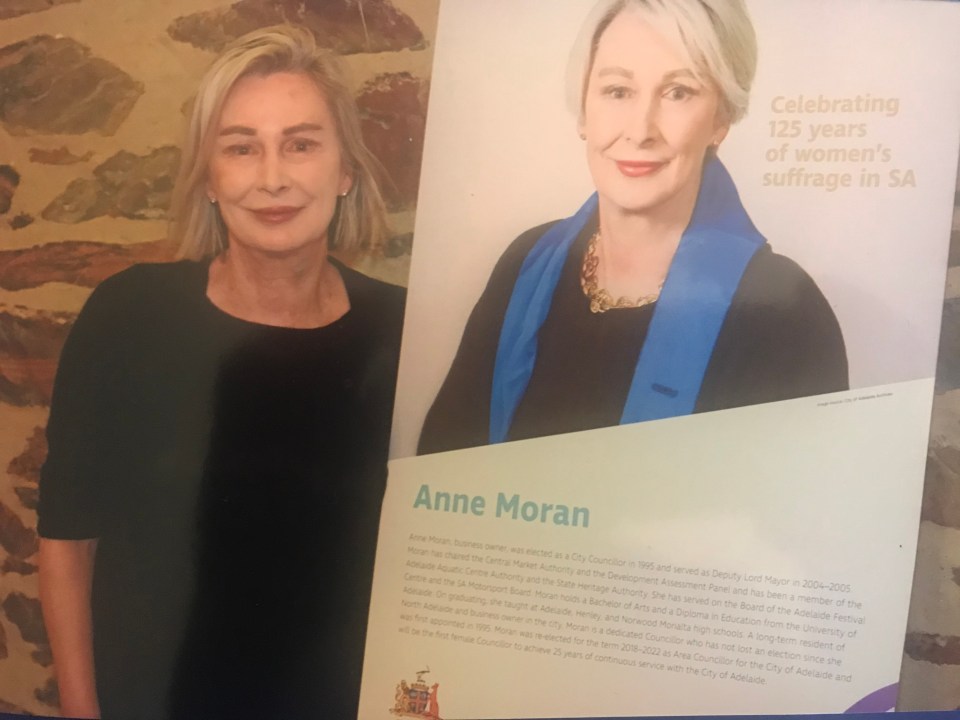 Now, the 65-year-old says ageism is starting to creep into the chamber.

“Until this term I never even felt like I was old or past it, until (the majority faction) Team Adelaide came and that was suddenly a new thing,” she says.

“It stunned me and so they kept on hammering that – the lines like ‘you’ve been here too long’, ‘what the hell have you done in 25 years?’

“It did make me reflect on my longevity.”

Despite the criticism, Moran has never wanted to leave local government to pursue bigger and brighter things at state or federal parliament. 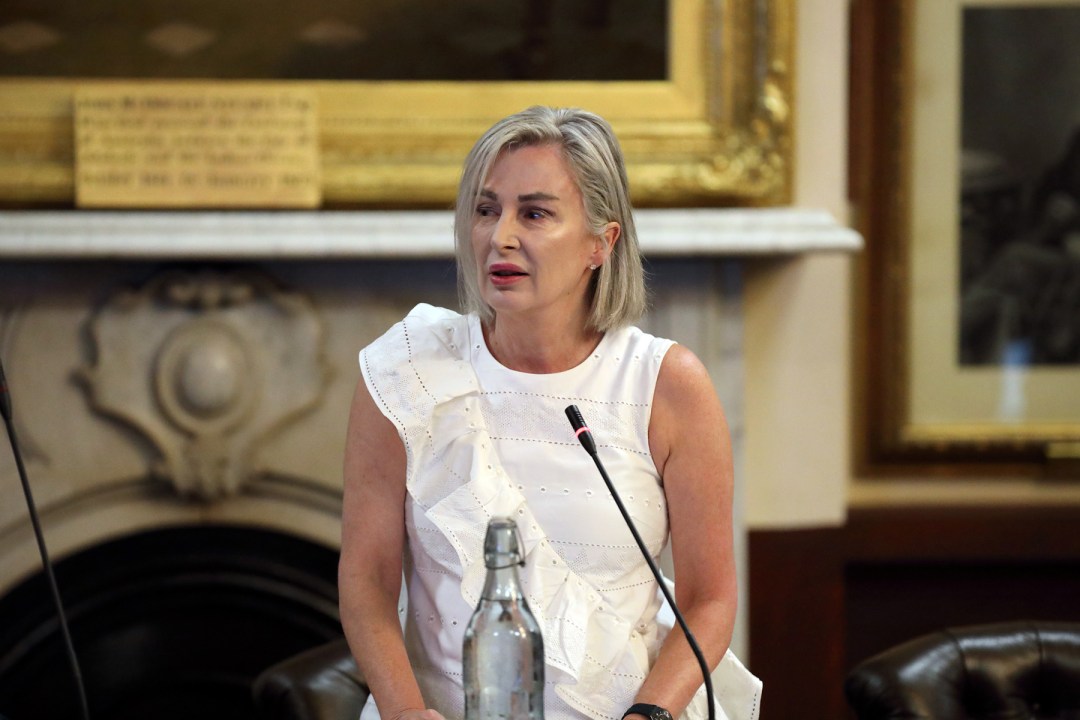 Despite appearing confident, Anne Moran says she has a fear of public speaking. Photo: Tony Lewis/InDaily

She says she is considering running for Lord Mayor at the 2022 council election “unless someone else worthy enough steps forward”.

“I don’t speak well in public, I’m getting old, but if Sandy runs again and there’s nobody who takes her on I’ll boom or bust because I could not do another term with her,” she says.

“I mean, I love her, she’s charming, but her style of being the Lord Mayor is exactly the opposite of what I’d be.”

Asked what she would be like as Lord Mayor, Moran says she would “knock everybody’s heads together”.

“I’m not very visionary in the scheme of things – I’m more just rates, roads and rubbish,” she says.

“At the end of the day that’s what councillors are here for.”