InDaily reported on Friday that the Adelaide City Council had proposed it “reduce the scope” of its funding partnership with think-tank the Don Dunstan Foundation, which spearheads the Adelaide Zero Project to end homelessness in the city.

According to the council, doing so would save Town Hall $95,000 by the end of this financial year.

The Adelaide Zero Project, which is run by a consortium of non-government and government organisations, aims to ensure the number of people sleeping rough in the inner city is no greater than the housing available that month.

Adelaide City Council has been a key financial contributor to the Adelaide Zero Project since it launched in 2017, most recently committing $200,000 in contingent funding in March last year, with only $105,000 being spent.

The council said this was because the money was contingent on the State Government also providing a similar level of funding, which the council says it hasn’t provided.

“The City of Adelaide has a strategic partnership with the Don Dunstan Foundation to deliver project coordination for the Adelaide Zero Project that ends on 31 December 2020. The value of this partnership is $383,880 over three years,” the council’s community and culture associate director Christie Anthoney said.

“An additional $200,000 was budgeted for the 19/20 financial year to implement the recommendations of the Dame Louise Casey report contingent on State Government funding the rest.

“The State Government did not commit to funding the remaining recommendations, but have co funded a feasibility for inner city service coordination at $45,000 each, and Council committed $60,000 to the (Adelaide Zero Project) to progress work on supporting mobile Aboriginal communities.

“There is $95,000 remaining of the additional $200,000 and as this remained unspent, it was provided as a potential saving for Council to make, considering the budget implications of COVID-19.”

The council has felt the pinch from the coronavirus, which has resulted in it losing $9.4 million in revenue and facing a growing operating deficit of $19.3 million.

Don Dunstan Foundation executive director Ritchie Hollands told InDaily while the COVID-19 outbreak had significantly impacted the council’s coffers; it has also had an “enormous impact” on the community.

He said the foundation planned to use the $95,000 in council funding to implement recommendations from a report compiled by Institute of Global Homelessness chair Dame Louise Casey, including a “homelessness prevention fund” to move rough sleepers into housing and private rental.

“At a time when homelessness is both on the increase, and when we have seen the State Government committed to work strongly with this sector, withdrawing funding is counter-intuitive,” he said.

“In late February we knew of approximately 150 people rough sleeping in the Adelaide CBD.

“We now know that there are close to 500 (in temporary accommodation).”

The State Government in March announced that it would pay to accommodate all rough sleepers in motels in an attempt to mitigate the spread of COVID-19.

Hollands said crisis accommodation services were currently full, with other emergency services operating at a reduced capacity during the coronavirus pandemic.

“These are all temporary accommodation options, and these people will need permanent housing outcomes,” he said.

“This is an opportunity to transform the experience and impact of homelessness and we are hopeful that councillors will recognise the opportunity and vote to continue the funding to Adelaide Zero.” 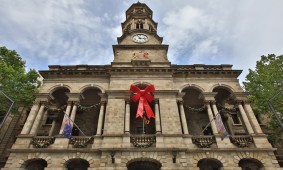 Area councillor Robert Simms told InDaily he planned to asked questions at tonight’s committee meeting to “get to the bottom of this and understand exactly what is being proposed”.

“I think it’s the wrong move for the council to be reducing homelessness funding at this time,” he said.

“We know vulnerable people are going to be disproportionately impacted by the financial impacts of COVID-19, so this doesn’t seem the right thing to do.”

Deputy Lord Mayor Alexander Hyde said he would propose that the council commit to spending the $105,000 this financial year.

“I think it would be pretty poor form to leave money that’s already been budgeted to go helping the homeless, to leave that unspent,” he said.

Councillors will vote on the budget measure at next Tuesday’s council meeting.