Onkaparinga Council has drawn up a blueprint for a major overhaul to the Noarlunga TAFE precinct, which houses the theatre – for which funding was axed in Treasurer Rob Lucas’s 2018 state budget.

Late last year Education Minister John Gardner offered a limited lifeline, with $50,000 to keep the doors open till mid-year, and another $50,000 until year’s end if necessary while the council negotiates with TAFE over the site’s future use.

Today, that vision can be revealed, with the council seeking federal, state and industry investment for “a catalyst development opportunity [to] deliver an innovation, education and community hub for the south”.

Known as ‘14° South’ – a nod to Lot Fourteen, which it hopes to use as a selling point to the Marshall Government – the precinct will complement the Old Royal Adelaide Hospital site’s “hub and spoke model” of “linking start-ups and existing businesses to access Stone & Chalk growth initiatives” while breathing new life into the TAFE campus and “providing essential community, economic and educational services for the Fleurieu”. 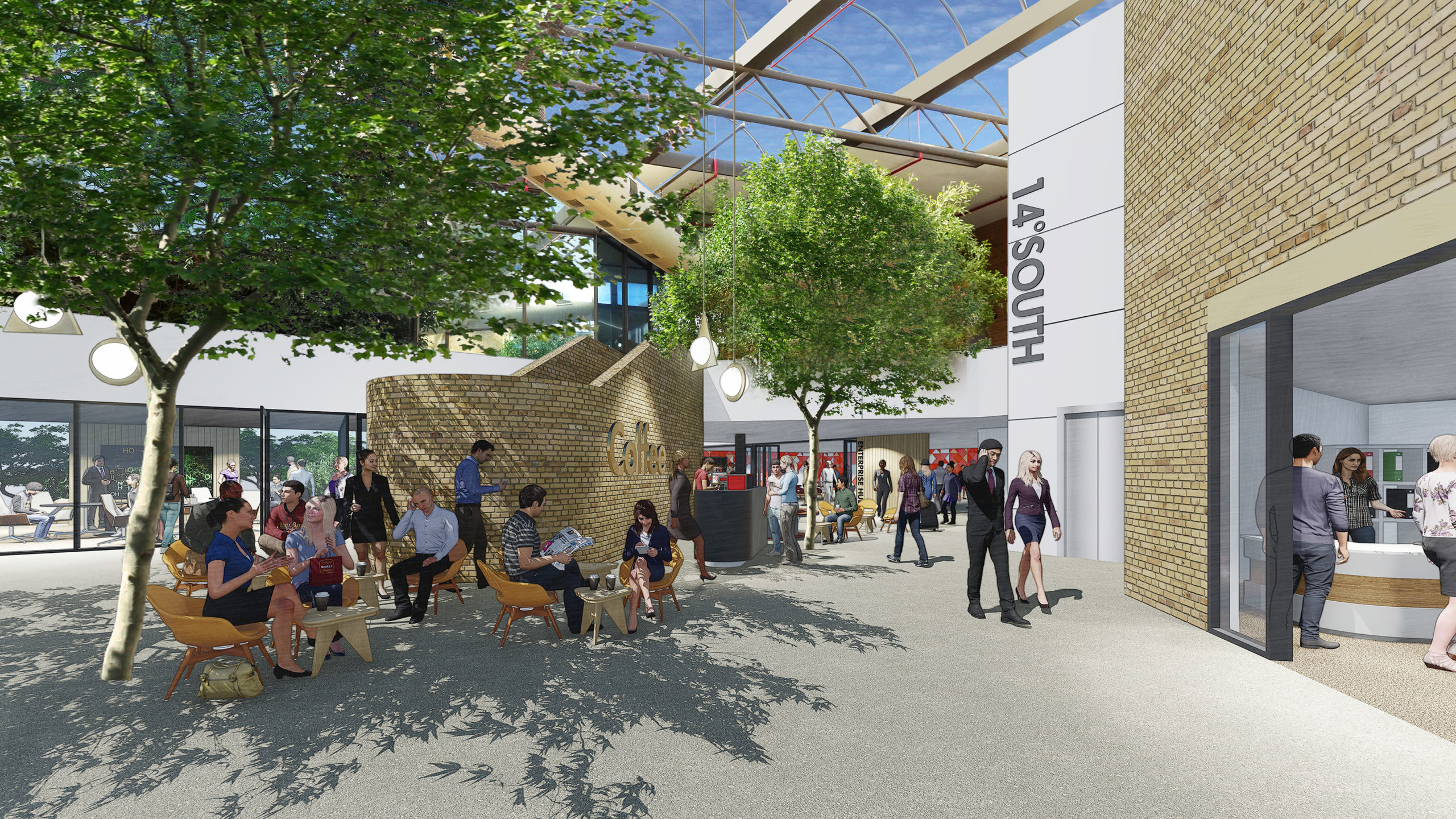 An artist’s impression of the atrium for the proposed precinct. Photo: Supplied

“By extending further south beyond Tonsley, we will build links between Lot Fourteen industry clusters, southern Adelaide, McLaren Vale and the Fleurieu Peninsula,” a prospectus for the project says.

“Onkaparinga is home to countless creatives, entrepreneurs, agricultural influencers and technical innovators who believe in our region and South Australia… we must leverage these strengths to influence new partnerships, build new connections and bring new leaders into South Australia’s innovation and entrepreneurial eco-system.” 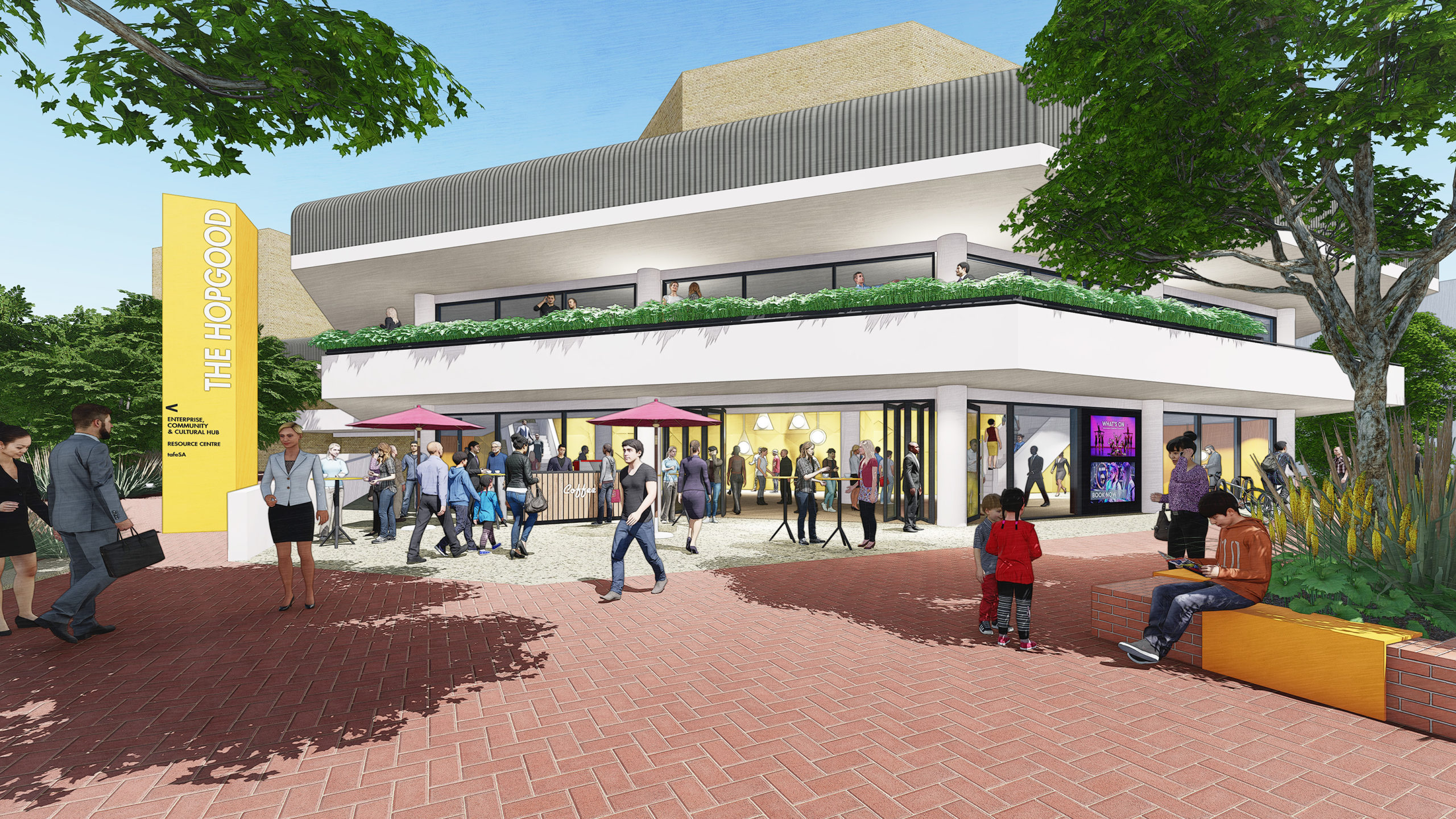 The proposed revamp to the Hopgood Theatre. Photo: Supplied

Mayor Erin Thompson told InDaily the project “came to life out of the need to find a solution for Hopgood Theatre”.

“The future of that theatre has been in jeopardy for quite some time and up until very recently it was meant to be closed in December, due to State Government withdrawing its funding,” she said.

“That’s where we’ve some up with this vision called 14° South, an integrated hub that will revitalise TAFE SA Noarlunga, the Noarlunga Library and the Hopgood Theatre,” she said.

“It looks to address quite a few different challenges in our community – not least with Noarlunga Library requiring some upgrades as well – and to activate that overall precinct.”

But she acknowledged the funding was the sticking point, saying “we haven’t got down to that level of detail yet”.

“The full investment required to deliver the full vision is $22 million [which is] obviously far greater than what council can deliver alone,” she said.

Council has met with Premier Steven Marshall as well as Gardner, who are expected to visit the site in future.

Budget constraints as well as recent upheaval with the coronavirus pandemic have made funding projects ever more problematic, but the State Government has also committed to a spending program to stimulate the economy, and Thompson insists the project “could help them to achieve some of their objectives as well”.

“We’d be looking to contribute to the growth target,” she said arguing the plan would deliver around $20 million into the SA economy including through jobs and tourism, “and I’m sure that’s an area they’re looking to improve at the moment”.

“I don’t think those objectives are going to go away… we’re hoping that the changes that have happened recently could have a positive impact rather than a negative, with an opportunity to invest in projects that are going to invest in our economy.”