In an explosive thread published from his verified Twitter account this morning, White alleged Wright had demeaned some of his players, suggesting they should “hang themselves” in a private text exchange with fellow coaching staff.

In a brief statement late this morning, the club said it took the allegations “seriously” and would investigate further.

Wright has since apologised “if my private comments have offended anyone” but argued they were taken “out of context”, noting he had delivered his players “some very tough messages about team cohesiveness because the team was reluctant to gel”.

It comes after Wright’s departure from the club – with two years left to run on his contract – was formalised on Wednesday.

In his tweets, White posted a screenshot of a text conversation between five members of the 36ers’ coaching group, in which one participant bemoans that several players are returning low “wellness scores”, and suggests checking on the welfare of four in particular.

In the screenshot, Wright responds: “Fuck all of them. Hopefully it gets low enough for them to hang themselves. Fucking dicks.”

He then adds a subsequent message: “Maybe a bit to [sic] harsh :)”

In a further message, he suggests the players were responsible for “all of the issues” and “they probably feel low [because] they can’t ruin anymore [sic] people’s lives for at lest [sic] 3 months”. 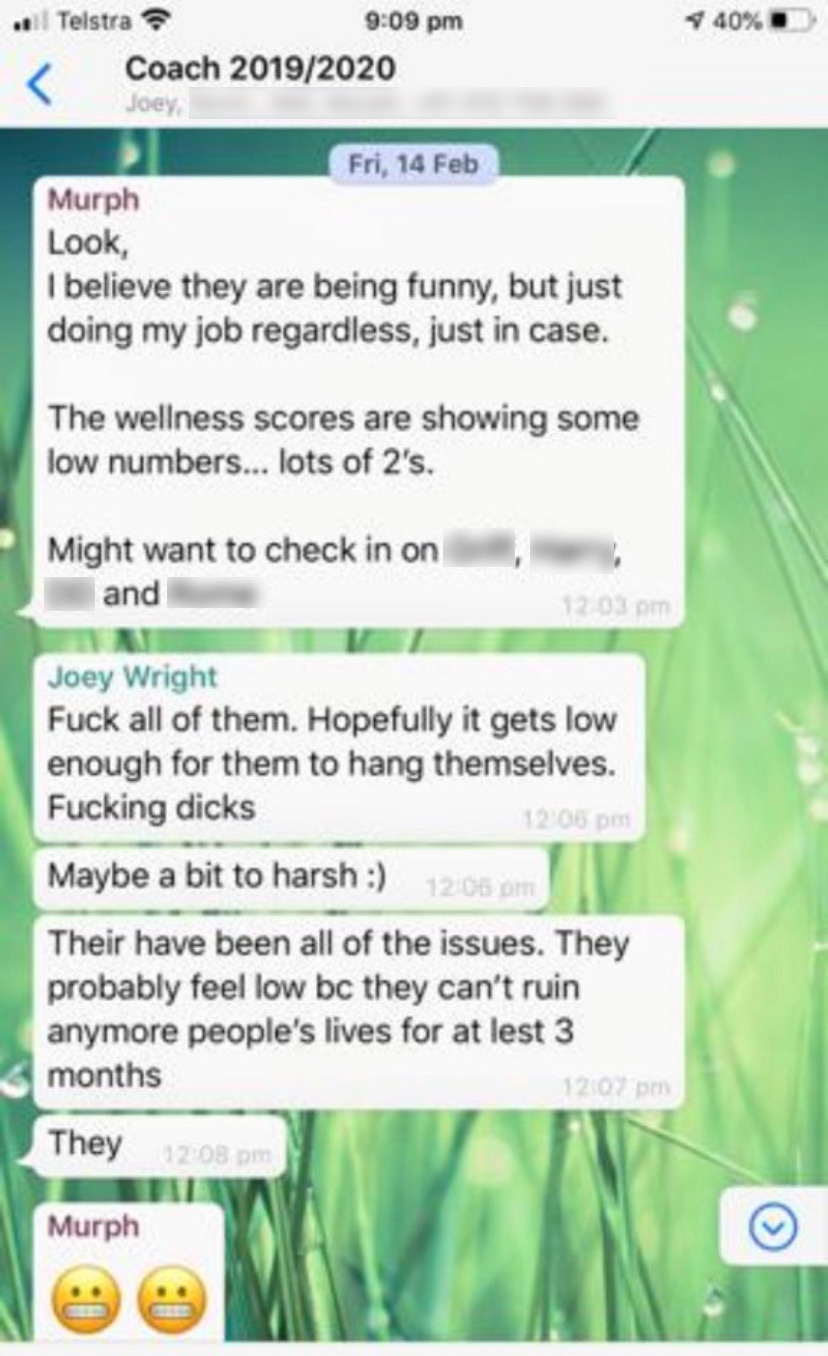 After posting the image, White tweeted: “WOULD YOU PLAY FOR THIS GUY??? Would you let your kids play for this guy?”

“For the sake of mine and my team mates mental health this needs to be exposed because it is not and should not be acceptable!” he wrote.

In a statement sent to InDaily via his lawyer Dimitris Parhas, Wright responded: “Every team has private conversations that occur behind closed doors where tough messages are given to players and coaches. Those messages should remain private and not taken out of context.”

He said “the message cited today on social media was a part of a private coaches’ chat group”.

“I made this comment as a  joke and this is evident in my comment ‘too harsh’ below. Many more comments were made in our player group chat and if they were ever published, everyone on the team would be defamed,” Wright said in the statement.

“Both the player and coaches’ chat groups  were used to vent out our frustrations as well as private jokes, not to be taken out of context and used against any one of us.”

White’s post came a day after the outgoing coach told The Advertiser that he and the club had mutually agreed to part ways, adding that “to get away from that situation is for me, health-wise, the best thing to happen”.

“I’m just concerned our values were inconsistent with one another and not that mine were right and theirs were wrong, but they were inconsistent and we just weren’t heading in the right direction,” Wright told the News Corp paper.

He also singled out imports Jerome Randle, Eric Griffin, Ramone Moore and Poland-bound Australian Harry Froling as players with whom he had a tense relationship.

“I’m not a halfway person, I can’t be lukewarm – you’re either with me or against me and there were four who weren’t really committed and by then the three imports and Harry didn’t give us what we needed. That was the reality of it.

“I would have loved for those guys to be a little bit more driven but we weren’t on the same page, and that’s not the club’s fault, that’s my fault and I tried everything I could to get them on the same page as everybody else.” 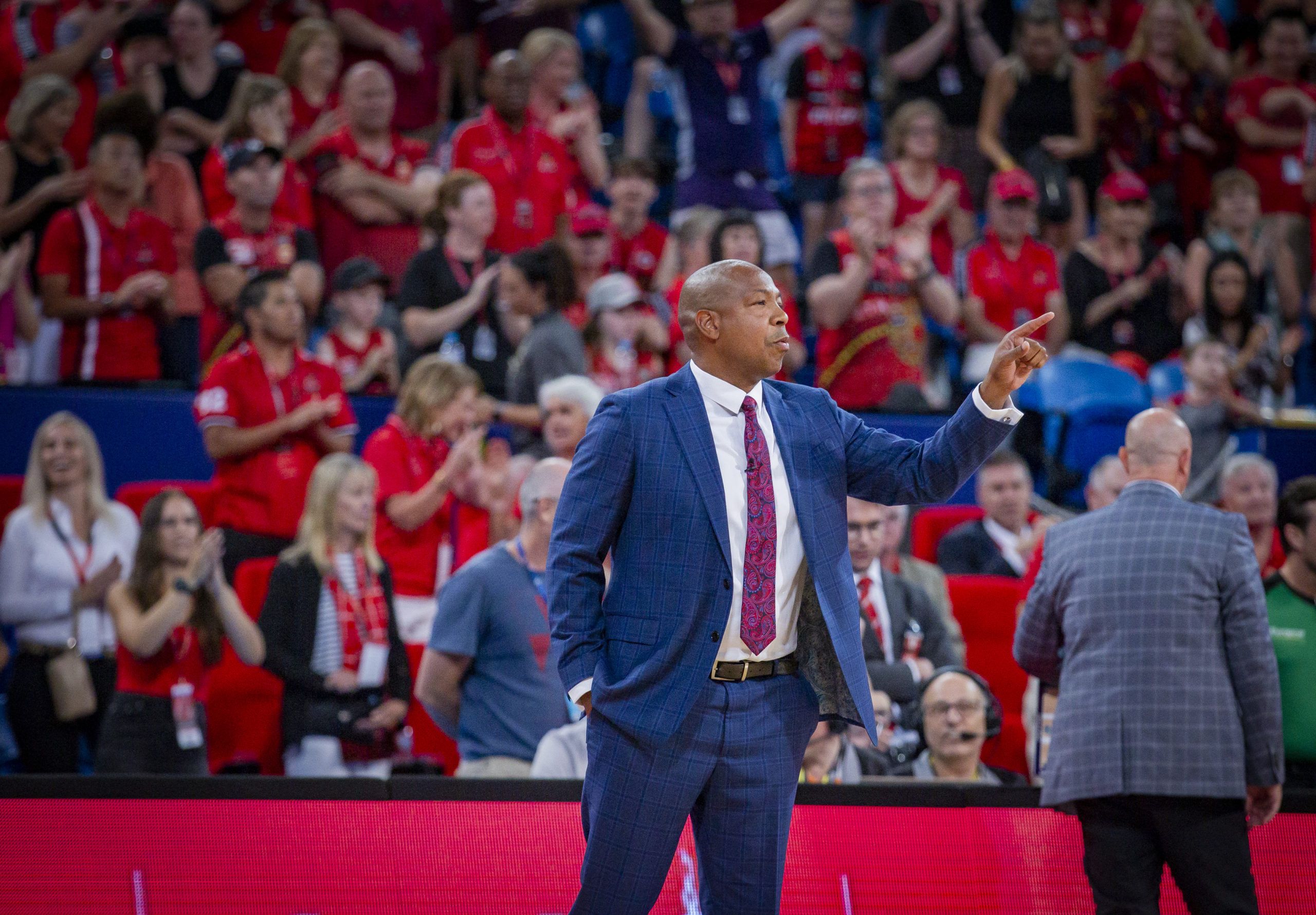 This parting shot appears to have prompted White’s Twitter rejoinder, with the guard flagging that he had raised concerns about the coach and had been repeatedly told by the club “to shut my mouth [and] it will be handled”.

“Well it’s now getting out of hand and I won’t stand for my team mates getting belted in the media,” he wrote.

White noted that “winning cultures” were built on the notion that “you rise as a team and fall as a team” but that in the case of the 36ers – who have missed the NBL finals for the past two seasons after playing in a grand final in 2017-18 – “every time it’s been the players”. 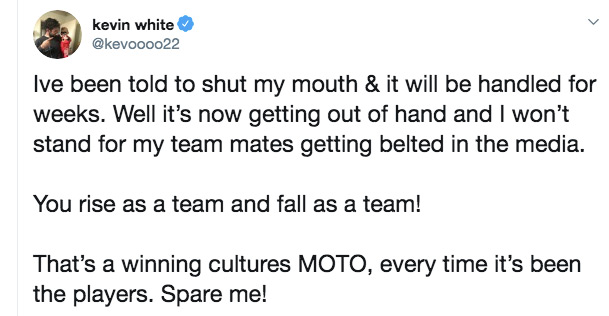 “[Eight] weeks ago we sat in a team meeting [and] were told ‘if we don’t make playoffs, people won’t think it’s because I’m a shit coach, they will just think I had a shit team’.”

He said the coach complained there were too many “empaths” on the team, “too many guys soaking others’ emotions… that care about their teammates’ situation and not worrying about themselves”.

“I’m not built like that, I’m the opposite of an empath!” he alleged the coach told the players.

“Still the guys shut their mouths and show up to train, play and do their jobs… all while copping this day in and day out… did any of the other coaching staff, ‘high performance team’ or office staff do anything? NO!!!! is the simple answer,” White continued.

He said Wright had alleged “a racial divide” had split the group “and we don’t function together”, suggesting the coach had told them to play for themselves instead “and then maybe you will help us win a game”.

In a statement, the club said it was “investigating comments made in tweets from co-captain Kevin White”.

“The club takes the allegations seriously and will investigate further as part on an ongoing review,” the statement said.

“No further comments will be made until the conclusion of the review.”

Wright’s statement argues White’s tweets were “a result of yesterday’s interview where I mentioned the three imports and Harry”.

“I also clearly stated in the same interview that I was to blame for not being able to reach those individuals,” he noted.

“I sincerely apologise if my private comments have offended anyone as they have been definitely taken out of context… those statements are not and should not be used in everyday conversations.

“Throughout the year there were some very tough messages about team cohesiveness because the team was reluctant to gel.

“There was an obvious separation between the players, therefore a constant need for repeated messages… in my attempt to care and want more for each player and the 36ers, I was not willing to turn a blind eye to blatant disrespect between players and coaches.

“At no time did I ever ask a player to do anything that was unfair and out of bounds for a professional player.”

White’s tirade also prompted a Twitter reply from former 36ers co-owner and general manager Ben Fitzsimons, who wrote: “What do you know about winning culture?”

Fitzsimons told InDaily: “I’ve known Joey for a long time, and he’s one of the most outstanding, amazing people I’m lucky enough to have in my life… to see this sort of stuff is no good for anyone.”

At the time, Wright enthused the pair had the “skills and attitude needed to lead the team”.

“They both exude what you’re supposed to be about when it comes to team,” Wright told the club’s website in October.

“From a coaching point of view we expect the guys to echo the sentiment of our staff, even when it’s hard… sometimes they might walk out of here with their mates hating them, but team-ship is more important than mate-ship, so sometimes they have to be that guy.”