The State Commission Assessment Panel (SCAP) is due to debate Alto Adelaide’s proposal for a 26-storey hotel at 124-126 Franklin Street tomorrow, six years after a redevelopment of the site was first flagged.

An application for a multi-storey residential building was initially lodged with the state government in 2014.

But in 2016 the Alto Adelaide proposal was amended to raise the building’s height from 53 to 86 metres, and increase the number of apartments.

In October 2016, the Development Assessment Commission granted planning consent for the construction of the 26-storey apartment tower with 51 car parks.

Multi-bedroom apartments at the 124-126 Franklin Street were initially offered for sale off the plan.

But in December 2019 an application for the development of 86.8 metre hotel building with 200 rooms and no on-site car parking was submitted to SCAP.

“The high-scale hotel development proposed, in conjunction with non-residential land uses at ground, is anticipated to generate pedestrian activity during the day, evening and late night, as desired within the Capital City Zone,” the report, recommending approval, said.

“The subject is located within the Affordable Housing Designated Area … noting a hotel land use is proposed in this case.” 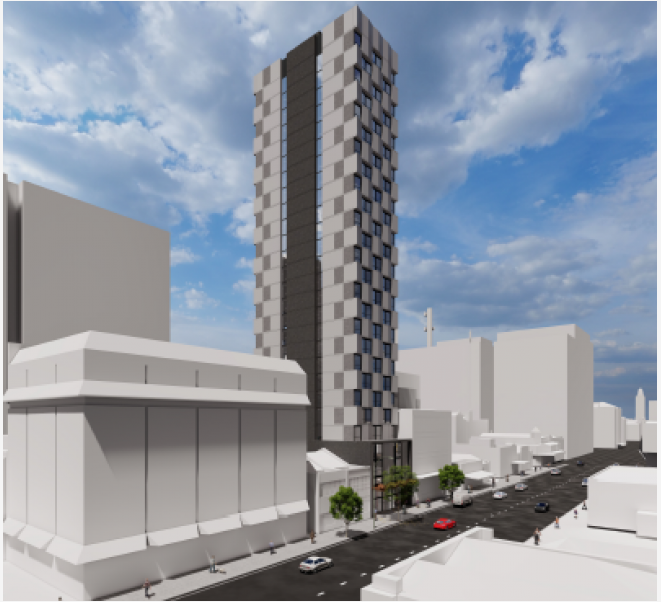 A screenshot of an artists render of the proposed hotel tower. Source: SCAP agenda

The proposal exceeds a 53-metre height limitation prescribed for city developments and was referred to the government architect and Adelaide Airport for advice.

According to public documents, the government architect supported the development application earlier this month while the Adelaide Airport referred the applicant to submit airspace approval through a separate process.

Alto Adelaide’s Peter Price said he would not comment on the development plans before SCAP had reached its decision.