The planners’ stance comes amid warnings that the city’s bikeway project could have its deadline dragged out for a third time, with the State Government possibly being asked to grant another funding extension.

While construction delays stall progress on the north-south bikeway along Frome Street, the council is still undecided about where to locate its long-debated east-west corridor – despite endorsing Flinders and Franklin streets as the preferred option in 2017.

“We would stand by our original analysis and the original recommendation that we made – Flinders-Franklin would be the preferred corridor,” she said.

“There will be some technical challenges but from our view they won’t be difficult to overcome.”

Both the north-south and east-west separated cycling corridors were originally due to be completed by June 2018, but the then Weatherill Government, which contributed $6 million to the project, agreed to extend the deadline until June last year.

The Marshall Government granted the council a second funding extension in December, with the current deadline to complete both bikeways set at June 30 2021.

The council’s planning, design and development associate director Shanti Ditter last night warned that the council was working “to a fairly limited timeframe”.

She said ongoing construction delays to the 36-storey Adelaidean hotel complex on Frome Street – to be completed this year, one year overdue – have hampered progress on the north-south cycling corridor.

Progress has also been delayed by the construction of an adjoining student accommodation tower, which Ditter estimated could take up to 18 months to complete.

Meanwhile, work on the east-west corridor is stalled after the council voted in 2018 to halt planning until it completed the north-south bikeway.

Ditter said last night that it could take between six to ten months for staff to present councillors with a feasibility report for an east-west route.

She said that if the council missed its June 2021 deadline, an east-west cycling link “may not be a separated bikeway”, but an alternative cycling lane design.

I believe common sense would prevail

The comments prompted the council’s CEO Mark Goldstone to state there was “nothing to prevent” the council from approaching Transport Minister Stephan Knoll seeking its third extension to the 2016 bikeway funding agreement.

“That has occurred in the past and that has been provided to us in good faith,” he said.

“I believe though, that if we were to go back this time and seek an extension, we would need absolute clarity and a clear path of milestones to enable delivery to occur if a further extension was to happen.

“If that was to be made, I believe there would be a reasonable response and we would be able to construct without needing to rush construction as no-one would want to see.

“I believe common sense would prevail.”

In a statement, a State Government spokesperson said it would “wait to receive the request and relevant information from Council before making a decision on the extension of time and funding”.

Area councillor Franz Knoll questioned whether the council would need to build a separated bikeway if it chose to build the east-west corridor along Pirie and Waymouth streets.

A new report released by the council this weeks states that building a separated bikeway along those streets could come at a cost of 336 car parking spaces and 63 motorbike bays – meaning the council could lose about $750,000 each year in revenue.

“Is there an option to be able to say, OK here is an acceptable method of which we can accommodate vehicles and bikes?,” Knoll asked.

“I look at this and there’s quite a few options where you would not necessarily need to do that (build a separated bikeway).”

But McDonald said separated bikeways were preferable as “they are much safer than painted lines on the road and they’re much more likely to increase the number of people riding into the city”. 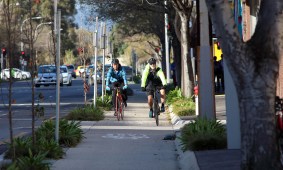 She said there would be less impact on car parking if the council proceeded with building a bikeway along Flinders and Franklin streets.

“We could certainly fit parking in there as well as a bikeway,” she said.

InDaily reported yesterday that Deputy Lord Mayor Alexander Hyde had called on the council to build the east-west bikeway along Grote and Wakefield streets – despite the council canning the idea three years ago.

McDonald said last night that a Grote-Wakefield bikeway would provide a “lower-level of service for bike riders than a bikeway along Flinders-Franklin”.

“From a bike rider’s point of view it would be a slower journey on a bike… because you would have to stop and give way to passengers getting on and off buses, and there’s about 20 bus stops along that corridor,” she said.

But Hyde argued ratepayers along Flinders and Franklin streets had expressed concerns about the financial loss they could incur if car parking was removed to make way for a bikeway.