Since 2016, the council has stalled on choosing a route for the $5 million State Government and council-funded east-west bikeway, which is now not likely to be completed until next year at the earliest.

A new report released by the council yesterday afternoon states that building a separated bikeway along Pirie and Waymouth streets could come at a cost of 336 car parking spaces and 63 motorbike bays – meaning the council could lose about $750,000 each year in revenue.

The route is one of three east-west options considered by the council in recent years.

Hyde, who has previously expressed support for building the bikeway along Pirie and Waymouth streets, told InDaily this morning the option was now “clearly not going to work”.

He said he would ask the council to instead reconsider building a bikeway along Grote and Wakefield streets, a route discarded by the council in 2017 when Flinders and Franklin streets were endorsed as the preferred option.

“The overall effect on businesses (along Pirie and Waymouth Streets) is questionable – what does it mean if you can’t park on the street?” he said.

“I think you’d find that during the day those car parks are pretty much full… so that’s what concerns me the most I guess.

“I’ve already been fielding calls about concerned businesses and property owners about it.”

Hyde said Grote and Wakefield streets “could provide an alternative that doesn’t need to scrap any car parks or lanes of traffic”.

“The corridor is currently shared by cars, buses and bikes but it definitely has the space to accommodate all user groups and could do with an upgrade anyway,” he said.

“If you look at the Grote and Wakefield option… the footpath is quite underutilised and I think if (the bikeway) did touch the kerb line you could have enough space to keep angle parking and everything else.”

A report published by the council in 2017 stated several factors made Flinders-Franklin a better route than Grote-Wakefield.

It said Grote and Wakefield streets feature 20 bus stops which would need to be reconstructed to accommodate a separated bikeway, about double the motor vehicle traffic, complex truck loading arrangements at the Central Market that would be “difficult to integrate with the bikeway”, less adjacent development potential and fewer workers in bordering buildings. 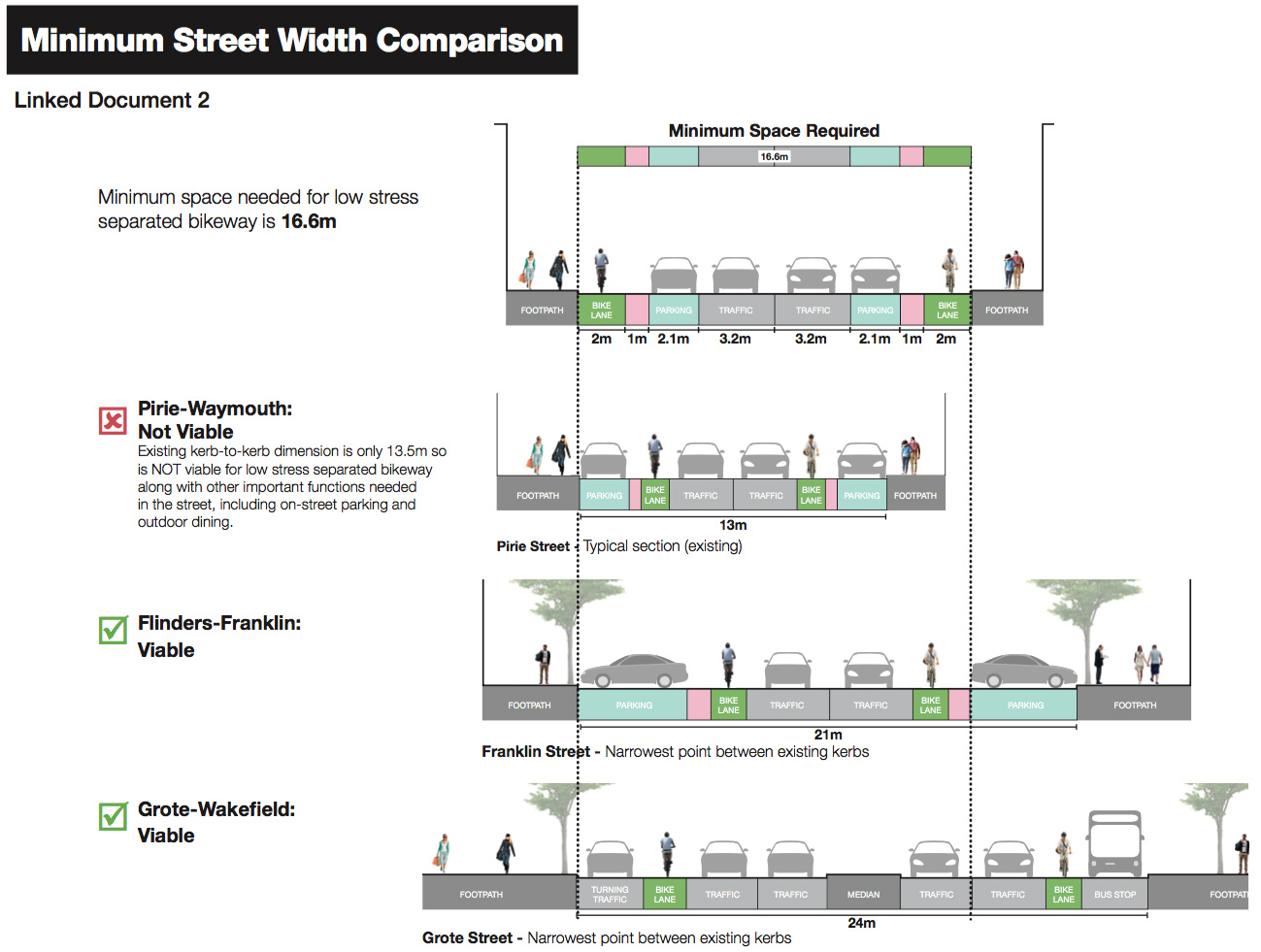 Hyde said he had read the 2017 report, but he dismissed the potential impacts on cyclist safety and bus infrastructure.

The 2017 council report stated Flinders-Franklin was the preferred route as the streets were already popular with cyclists, featured no bus stops and had the potential for widened footpaths and more street trees.

But Hyde dismissed the route as a viable option, saying he had been contacted by “dozens” of concerned business owners and residents along Flinders and Franklin Streets who had told him they would be financially impacted by the potential loss of car parking.

“I just want to make the point that we are actually playing with people’s livelihoods here, so we can’t afford to make the wrong decision because of the implications on the entirety of the street,” Hyde said.

“If people say they are going to be severely impacted by a loss of car parking then we need to take that into full consideration.”

But area councillor Robert Simms accused Hyde of attempting to delay progress on the east-west bikeway.

“Grote Street was discredited early on so we can’t go down that path again,” he said.

“I have no doubt, if administration goes back to look at the Grote Street option, councillor Hyde will be critical of that too.

“I’m happy to go back to the original Flinders-Franklin plan but a third investigation is just not an option. 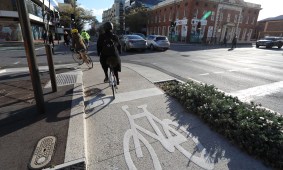 Adelaide CBD: big on cheap parking, behind the pack on cycling

“I fear we also risk losing State Government funding for the east-west bikeway if we don’t take action soon.

“That would be humiliating for the council and fly in the face of everything we are doing to reduce carbon emissions.”

Councillors will discuss the Pirie-Waymouth bikeway report tonight, but no decisions will be made.

The council will also debate a separate city access strategy report, which states South Australia spends the least amount on cycling infrastructure in the country, but Adelaide’s CBD has the most and cheapest car parking of any capital city.