According to a report produced by Adelaide-based consulting firm Aurecon, South Australia spent $4 million in 2015-16 on cycling infrastructure, but $569 million on roads.

When compared as a percentage, cycling spending accounted for just 0.6 of road spending – the same comparative amount also spent by New South Wales and the lowest in the country.

The report, to be discussed by Adelaide City councillors on Tuesday night, also states Adelaide has the most and cheapest car parking of any capital city in Australia. 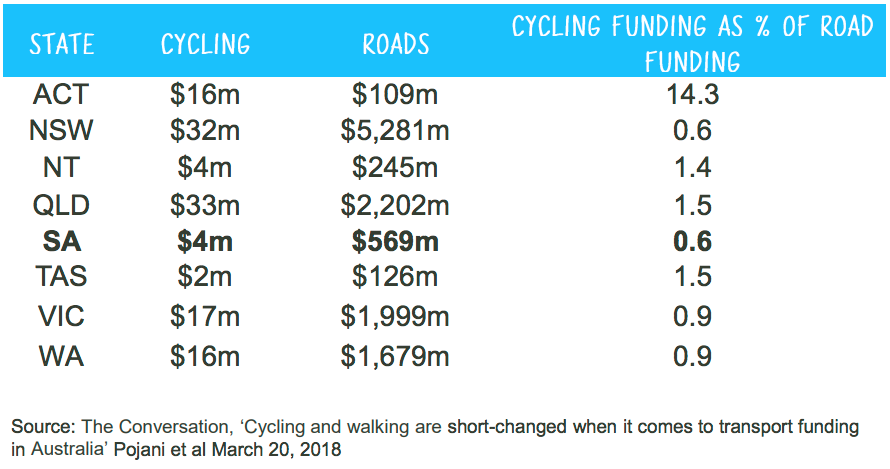 State and territory spending on cycling infrastructure in 2015-16. Table: Aurecon

The report will be used to develop a new $330,000 taxpayer-funded city access strategy to improve public transport, road, cycling and pedestrian infrastructure in and around the city.

Aurecon consultants stated in their report that “like other large cities, Adelaide has historical difficulty with introducing new initiatives that deprioritise private vehicles”.

They said there was an “opportunity” for South Australia to show “strong leadership and brave decision-making” by transitioning away from private vehicles. 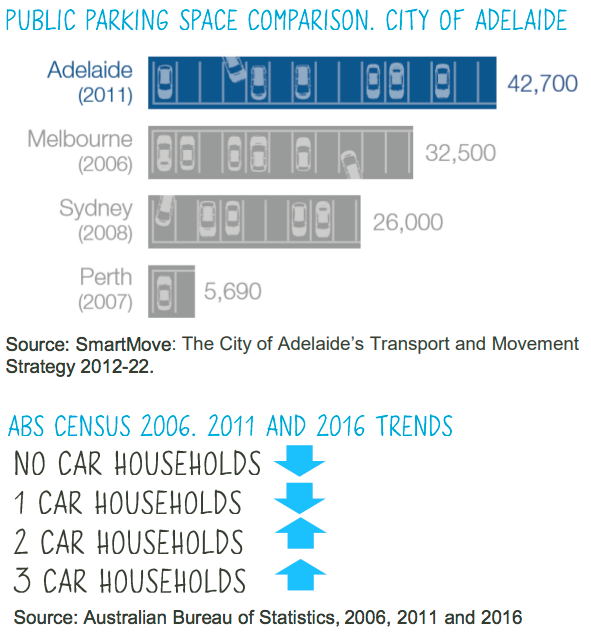 City councillors will on Tuesday night be asked to provide feedback on the report’s findings before a public consultation.

It comes as the council considers where to locate its $5 million east-west bikeway – despite approving Flinders and Franklin streets as the preferred location during the last council term.

Some current sitting councillors have since criticised that location, claiming it would adversely impact on-street car parking.

In response, south ward councillor Helen Donovan requested that council staff instead consider the viability of building the east-west link along Pirie and Waymouth streets.

Councillors will discuss a new, yet-to-be-released report outlining the feasibility of building a bikeway along those streets at Tuesday’s meeting.

An earlier council report published in 2017 found Pirie and Waymouth streets would be too narrow to accommodate both a separate bikeway and on-street car parking.

“We know from past experience that the significant increase in safety provided by separated bikeways leads to a dramatic boost in the number of people choosing to ride,” she said.

“This improves the health and wellbeing of our city residents and visitors, and decreases carbon emissions.

“We also know from past examples, both in Australia and around the world, that separated bike infrastructure boosts retail expenditure in the surrounding areas, and increases property values, so it will be interesting to see which street scores this upgrade.”