City councillors and staff met behind closed doors last night to receive an update from their chosen developer for the site at 88 O’Connell Street, which has remained vacant for over 20 years.

The council is currently in a non-binding heads of agreement with the developer – understood to be Adelaide-based firm Commercial and General – and both parties have signed a non-disclosure agreement that prevents the release of information to the public.

Ahead of last night’s discussion, the council’s associate property director Tom McCready said confidentiality was required as elected members would be presented with “significant information” relating to intellectual property.

He said the latest date the council could make the plans public would be May 23, but the council “intends to wrap things up a lot earlier than that”.

“That date is linked to a State Government commitment,” he said.

“That is contingent upon information that relates to the State Government that elected members would be aware of.”

The council agreed to purchase the old Le Cornu site for $34 million in 2017 following 20 years of vacancy.

The sale, which InDaily revealed was up to $14 million above the site’s professionally assessed value, was assisted by a $10 million State Government grant.

A spokesperson for Planning Minister Stephan Knoll said there was “nothing to stop the Council going public with their plans unless they have an agreement with the developer not to”.

The spokesperson said when the State Government signed its funding agreement it required the city council to meet certain criteria before May 23 to receive the $10 million in funding.

“They have to satisfy those requirements by May 23, which they are understood to be on track to do.”

McCready clarified to InDaily in a statement this afternoon: “The State Government’s financial commitment towards the 88 O’Connell Street redevelopment has a requirement (under the funding agreement) to progress with an executed development agreement”.

“Council is confident of meeting the requirements of the funding agreement and progressing this exciting opportunity to revitalise such an important gateway site into the city,” he said.

Area councillor Anne Moran and north ward councillor Phil Martin argued against the council holding last night’s meeting behind closed doors, claiming that the discussion was in the public’s interest.

They also criticised the anticipated public release date for the plan as “too late”.

“We decided this a long time ago and it’s really embarrassing not to be able to say anything to the people who actually own the land and are paying for the development,” Moran said.

“We’re not talking about spies or spyware or something like that.

“We’re talking about a publicly-owned piece of land, we’re talking to the lucky proponent that got our nod – or majority nod.

“What are they going to tell us that Joe Blow ratepayer doesn’t deserve to hear?” 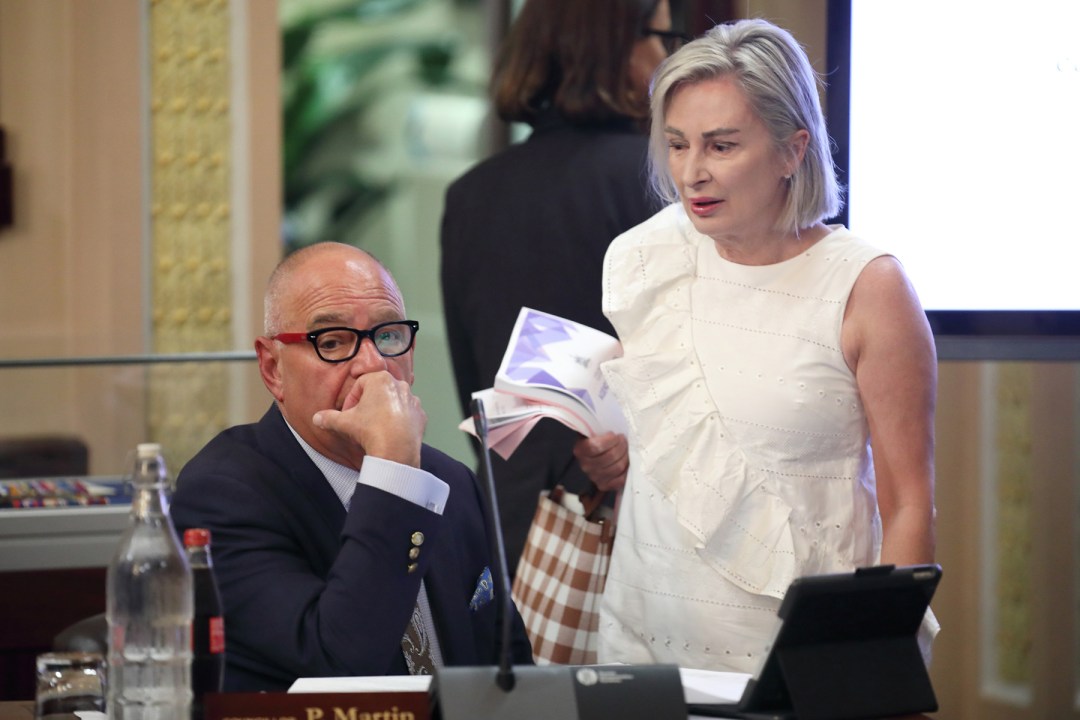 Martin added there was “sufficient speculation in the media” about the council’s chosen developer to warrant open discussion.

But the council’s governance manager Rudi Deco said information published in the media was “totally irrelevant”.

“You can move to discuss everything in public but there will be consequences for that and these consequences will be ultimately adverse to the community who will be hit in the pocket really, which is ratepayers’ money,” he said.

The Advertiser reported in November that the council had settled on Commercial and General as its preferred developer following a worldwide expression of interest process, but the council has refused to confirm the report.

During last night’s meeting, the council’s growth director Ian Hill denied that council staff had leaked the name of the developer to the media.

“It’s a small town (and) obviously speculation is speculation but from our perspective we didn’t release any information around proponents on this project and nor do we intend to until we get to a development agreement point,” he said.

InDaily later spotted what were understood to be Commercial and General staff entering Town Hall ahead of last night’s confidential session.

Furniture retailer Le Cornu owned the O’Connell Street block for 134 years before it was sold in 1989.

The council expects to start construction at the site next year.