Speaking at a community forum about the Adelaide Football Club’s controversial plan to replace the North Adelaide centre with a $65 million new headquarters, Sanderson said yesterday that the Adelaide City Council could find room in its budget to do the work without third-party support.

But she downplayed suggestions that the State Government could also tip in money – stating that an offer was rejected by the council in 2005 and all government funding had since been redirected to the State Aquatic Centre in Marion.

The Liberal frontbencher co-hosted the forum with Federal Labor MP Steve Georganas in response to growing concerns from some members of the community that the Crows’ proposal represents a commercial encroachment on the park lands.

A council-commissioned “needs analysis” outlining the future viability of the 50-year-old Aquatic Centre in Park 2 states city ratepayers could be forced to cough up $21 million to fix the centre in the short and long-term.

The analysis found the centre had “effectively reached the end of its lifecycle” and was operating at an approximate $1.03 million deficit when compared to the benchmark average for other best-practice facilities.

The Crows – buoyed by a $15 million Federal Government grant – have proposed to upgrade the Aquatic Centre on behalf of the council, on the condition that it would use an undefined amount of space for training and administration, which would be closed off to the public.

Sanderson said she and her Liberal Party colleagues were yet to form a position on the proposal, but the aquatic centre was “a very, very important centre to continue”.

“The reason that the State Government funding moved to the Marion centre is because the Adelaide City Council rejected the opportunity to have the (North Adelaide) centre rebuilt and expanded in 2005 and again several years ago,” Sanderson told the forum.

“The city council at the time had no interest.

“We’re at a point now where the State Government money is going to the Marion centre as the state aquatic centre.”

Sanderson said the Crows could “build wherever they like” and it was important for the council to maintain “such a valuable service to our community”.

“The council just spent $21 million on the vertical gardens along Gawler Place so there is money in the budget but it’s up to the council to determine where they spend that money,” she said. 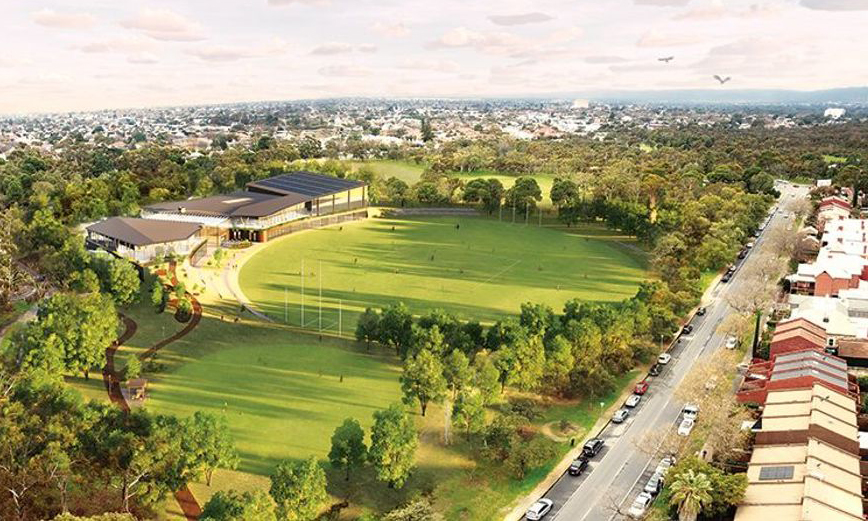 Lord Mayor Sandy Verschoor, who attended yesterday’s forum, retorted that the council’s budget process was “more transparent than any other level of government”.

She said the Gawler Place upgrade cost the council just over $17 million – a blowout to the project’s original $7 million price tag after unexpected underground problems were discovered during construction.

“Our budget goes out to consultation, we ask for feedback, we take the feedback very seriously and we ensure to allocate in the way that people want,” Verschoor said.

She added it was important for the council to consider “all options” for the aquatic centre upgrade, including the Crows’ proposal.

“I do actually think that before we shut the gates and say ‘no we’re not going to have this’, we need to explore the opportunities that they (the Crows) present and this may be one of them, it may not be one of them, but I would like to actually work through it so that we can make an informed decision.”

The council says the Aquatic Centre has “effectively reached the end of its lifecycle”. Photo: Tony Lewis / InDaily

Sanderson said after yesterday’s meeting that the State Government “doesn’t have a say at this point” as the proposal was still before the council.

She said she would post a survey to her constituents in the coming week to seek their opinions on the Crows’ plan.

“As the local member, I’m really just gauging the feelings of my community and… there are a lot of concerns,” she said.

“Some people see it as a great opportunity to have an improved public asset but then there are people who are strongly against a private business being in the park lands.

“I think I share the concerns of the community… and I’ll continue advocating on behalf of my constituents in cabinet and via the ways that I should.”

Asked if she could rule out any State Government funding to help with the aquatic centre upgrade, Sanderson said: “We would have to talk to the Treasurer on money issues, but I don’t really have any say in that.”

I think that we have to be very cautious, very careful and have all the information that we possibly can

Sanderson said she was not consulted about the Crows’ plans before they were made public, but she had since been briefed by the club.

Sports Minister Corey Wingard told InDaily last week that a sport infrastructure plan would be completed “in the coming weeks” that would include funding suggestions for clubs “at all levels, from grassroots to elite”.

Georganas told yesterday’s forum that governments “absolutely have to be vigilant” when it comes to developments on the park lands.

“I think that we have to be very cautious, very careful and have all the information that we possibly can,” he said.

The council’s 10-week public consultation on the plan, conducted via a survey on its “Your Say” website – closes on March 11.

"We won't be bullied" on Aquatic Centre revamp: Hyde

City Collective director David Cooke, whose architecture firm is working with the Adelaide Football Club to deliver the proposal, said yesterday that the size and scale of the public aquatic space would be determined by the council’s consultation on its “needs analysis”.

The club says its proposed centre would reach a maximum height of 16 metres – compared to the current centre’s 21-metre height – and would be surrounded by 750 linear metres of new paths and 400 linear metres of resurfaced paths for “increased connectivity” with O’Connell Street.