The State Government last week announced planning was underway for “additional major inner-city and sporting entertainment infrastructure” – its first public acknowledgement that a second city stadium is being actively considered to potentially shift A-League soccer from Coopers Stadium in Hindmarsh to the CBD.

One proposal – which has been linked to a potential sell-off of the Entertainment Centre and Coopers Stadium – is tied to the Adelaide Venue Management Corporation, which also runs the Adelaide Convention Centre.

That proposal was in a “feasibility stage” last year and suggests locating a new sports and entertainment hub at the railyards site adjacent to Adelaide’s new North Terrace health precinct.

The other bid suggests building a stadium on Memorial Drive adjacent to Adelaide Oval following recent minor upgrades to the tennis centre, which Tennis SA hopes is the first step in a significant broader redevelopment.

InDaily asked a spokesperson from the Adelaide Oval Stadium Management Authority if it was behind the Memorial Drive push, but is yet to receive a response.

A third option being mooted – but not formally proposed – is an arena built on the southern end of the Adelaide golf course.

The Memorial Drive, Adelaide golf course and railyards sites are all located on the park lands.

At last night’s Adelaide City Council meeting, it was revealed that Goldstone and two directors met with a consultant engaged by the Adelaide Venue Management Corporation (AVMC) in September 2018 to consider its proposed railyards stadium.

“Commentary was high level and broad in nature, and related to types of users and stadia infrastructure in other jurisdictions,” Lord Mayor Sandy Verschoor told the chamber.

“Following media activity last year detailing the potential for an inner-city stadium on or around the railyards, the CEO met with the CEO of the AVMC to seek clarity regarding the concept.

“The conversation was of a high-level nature and the CEO requested that if and when such a concept was progressed, the CEO of the AVMC would provide a briefing for council members.”

Verschoor said Goldstone participated in a “peer review” of the city stadium concept at the railyards but his comments were “limited to the potential impacts and limitations on the park lands site” as “no details were provided of the proposal”.

Goldstone told the meeting he would formally ask the AVMC and the Adelaide Oval Stadium Management Authority to provide briefings to council members about their respective plans.

He said while he had engaged with the AVMC about its proposal, he had “no insight into the Adelaide Oval Stadium Management Authority”.

Verschoor said no discussions had occurred with elected members or council staff about using a section of the Adelaide golf course to build a new sports stadium.

She said she was not involved in the council’s discussions with the AVMC.

InDaily asked the AVMC about the outcome of its “peer review” and whether it would accept Goldstone’s request for a council briefing.

“My apologies, but Adelaide Venue Management is not in a position to comment,” its CEO Anthony Kirchner responded. 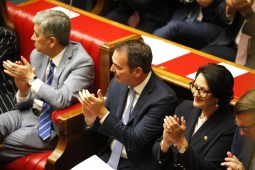 He said Coopers Stadium had a “sound year” but attendance figures were down across the A-League’s 2018-19 season.

InDaily asked a State Government spokesperson whether its “additional major inner-city and sporting entertainment infrastructure” would be located on the park lands.

The spokesperson said a soon to be released government sports infrastructure plan would look at a range of options and ideas from key stakeholders.