In a letter signed by 16 leaders and chairs representing SA’s major performing arts companies, the signatories demand the Festival Centre works to develop new “individual Strategic Partnership Agreements” with each stakeholder “to codify to the greatest extent possible the basis on which we commit to work together”.

It comes after InDaily last week revealed a 2019 submission to Infrastructure SA from the State Theatre Company arguing the need for “a new home” for it and other performing arts companies, and describing the Festival Centre as not “fit for purpose”.

Recently-appointed State Theatre chair Joe Thorp later distanced the new administration from the proposal, releasing a joint statement with Festival Centre CEO and Artistic Director Douglas Gautier that committed State Theatre to remaining at the Dunstan Playhouse complex “for many years to come”.

Thorp, however, is one of the 16 signatories to the letter, which it’s understood was delivered on Friday. 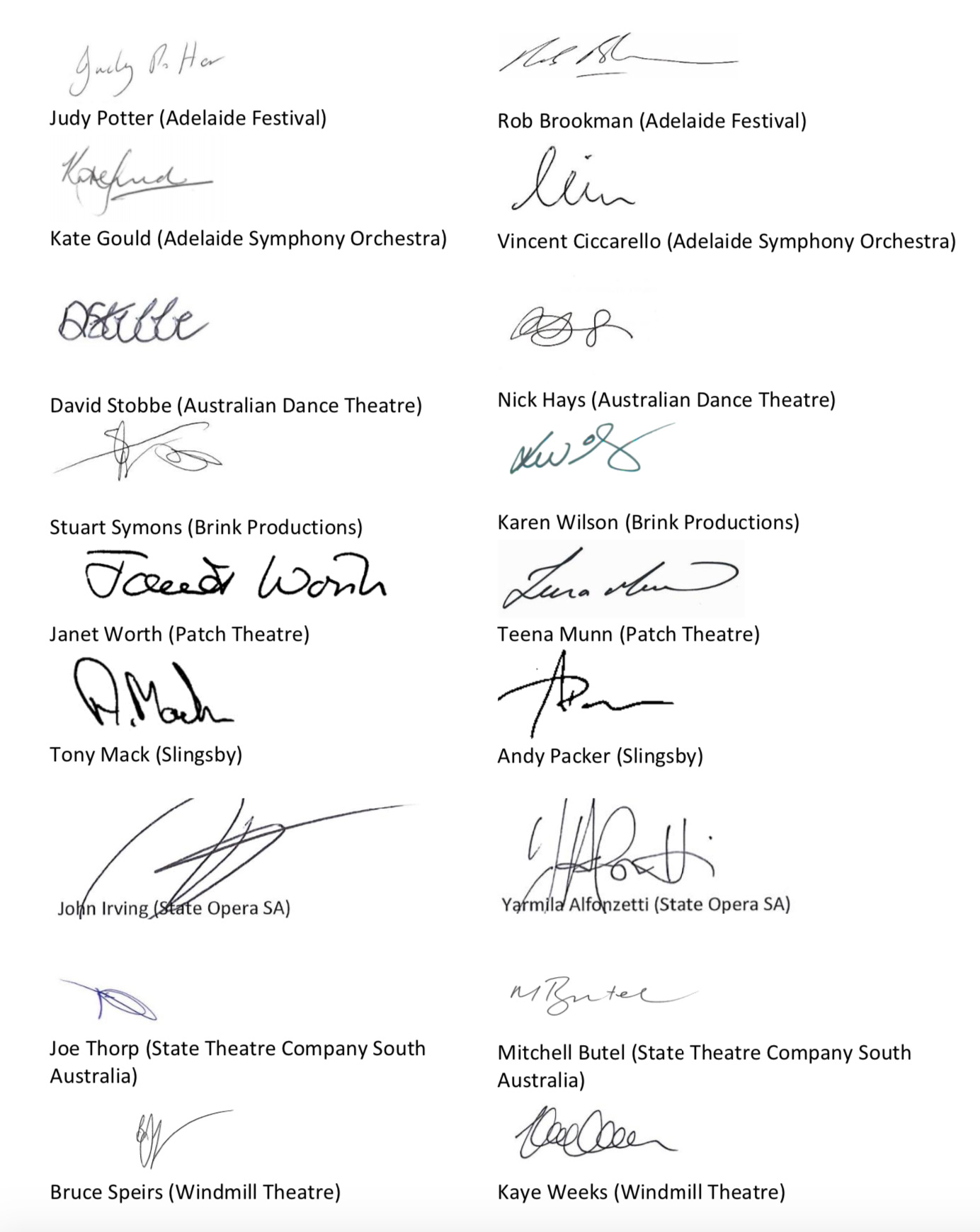 The signatories to the letter.

The letter, a copy of which has been obtained by InDaily, was addressed to Festival Centre Trust chair Michael Abbott, his fellow trustees and Gautier.

It was also sent to Arts SA director Jennifer Layther and the Department of Premier and Cabinet.

It highlights inevitable “creative and commercial tensions”, including “a perceived lack of transparency in relation to how [the Trust] sets its charges” for companies hiring venues.

“While acknowledging that we will never reach a point where such tensions will be completely resolved, we feel that there is substantial improvement possible, and indeed required, if we are to fulfil our respective roles within the cultural landscape of SA,” the letter argues.

“The areas of concern that we have vary from company to company but, to a greater or lesser extent, encompass almost every aspect of the relationship.”

These include priority access to venues for appropriate time periods and at appropriate times of year, unrealistic protocols regarding confirmation of dates, “competition” between the Festival Centre Trust and the Home Companies, rental and ancillary costs and labour charges (with the letter citing “increases well above CPI” for all three), and timeliness of negotiations where significant change is proposed.

Ticketing services, ownership of data, responsibility for foyer spaces, patron experience “including service levels in front of house and catering”, communication with audiences, competition for sponsorship and a lack of commitment to “meaningful consultation on matters that affect the Home Companies” are other concerns cited.

“All are supported by the State Government, with four of the nine being owned by Government either as statutory authorities or Government owned corporations.”

The authors note that they recently met with Festival Centre management – a meeting convened by Arts SA following a recommendation of the Marshall Government’s Arts and Culture Plan that “all the resident and non-resident companies that utilise the [Centre] meet on a regular basis to understand the scheduling and other challenges”.

The letter notes that the Trust is the “key cultural partner for the Home Companies in delivering high quality performing arts experiences for our audiences and opportunity for our artists and creative workers”.

“Indeed, this is one of its statutory functions (although this does not seem to be reflected in the Trust’s annual reports),” it states.

“Between us we present a very high proportion of all performances at the Festival Centre and it is therefore vital that the arrangements for the [companies’] use of the Trust’s venues deliver the best outcomes for audiences, the companies and the Trust.”

The letter argues a “shared view of the necessity to create a broader framework of Strategic Partnership Agreements which can be collectively negotiated in terms of the underlying form and principles but which are then individually tailored for each company”.

They say annual theatre hiring agreements “do not provide the long term certainty required for adequate planning and the development for our companies” and seek an “extended horizon” of five years.

“These would provide something to go back and refer to when individual disputes arise,” they write.

“We believe that the development of such Strategic Partnership Agreements would create greater clarity and certainty, and maximise the synergies between [the Trust] and the Home Companies] while minimising unnecessary friction and conflict…

“Such agreements have been established in the past in at least one major centre in Australia (Sydney) and significantly improved venue/resident company relationships.”

The letter says one of the companies, Brink Productions, has struck such an agreement already, while Patch and Windmill both met with Centre management recently “and there are some promising indications that [the Trust] will look at lowered rental fees in the Space Theatre and a more collaborative working relationship”.

However, the authors argue “such individual negotiations do not derogate from our shared view of the necessity to create a broader framework of Strategic Partnership Agreements”.

“This necessity is now pressing,” they write.

“To meet the business needs of all parties, including the Trust, and to provide an effective context for negotiation of hiring arrangements for 2021 and beyond, strategic partnership agreements should be developed by 30 June this year.

“We therefore request… that the Festival Centre Trust develop a strategic partnership agreement with each of the Home Companies be considered by the Trust at its next meeting, and a response communicated within two weeks of that meeting.”

In response to inquiries, Abbott told InDaily in a statement that “a meeting of the Chairs and CEOs of all the local performing arts companies and the Adelaide Festival Centre was held on 30th January, as recommended in the Arts Plan”, which recommended such meetings should be held twice a year.

“Adelaide Festival Centre is committed to this process,” he said.

“Since that meeting, Adelaide Festival Centre has held positive and detailed discussions with the small and medium arts sector – the majority of the group – in looking at a new approach to working with them in the Playhouse complex (Dunstan Playhouse and Space Theatre).

“This will cut their costs and make more time available in the theatres.

“Further positive talks have been held with the new Chair and Artistic Director of State Theatre Company to plan for their partnership with Adelaide Festival Centre over the coming years.”

Abbott said that the newly refurbished Her Majesty’s Theatre, reopening in June, will “also alleviate many of the access issues – particularly for the opera, orchestra, ballet and the Adelaide Festival of Arts”.

“I am informed that the outcome of all these discussions has already been fruitful and beneficial to both sides,” he said.

“There is still work to be done by all of us, but Adelaide Festival Centre’s leadership team and Trustees are committed to working with all our partners to reach the best long-term outcomes for South Australian audiences.”