Central ward councillor Jessy Khera told a council meeting last night that cancelling fireworks displays in the city as a mark of respect to bushfire victims was an idea “that can only be dreamt up by Osama Green Laden”.

He also called on councillors to “picture the iconic Walt Disney opening fireworks… replaced by a bunch of LED lights” to argue his support for retaining fireworks at Elder Park.

The comments were made during a discussion about whether the council should investigate replacing fireworks on New Years Eve with a “state-of-the-art light show” including synchronised drone performances, artistic light projections and audio.

Deputy Lord Mayor Alexander Hyde, who led the call, said that while fireworks had an “old-world charm”, they “do not need to be the only way we celebrate and entertain people that come to the city”.

“Advances in technology – both laser light shows, drones – means that we can explore other, more cost-effective ways to entertain people that come to the city,” he said.

“This doesn’t necessarily mean that we would cancel the fireworks overnight – by all means I don’t want to see that.”

But Khera described the move as an “incessant push to ban and kill and eliminate fireworks permanently”.

He said that fireworks were “beloved for thousands of years” and gave children a feeling of “particular and specific joy and wonder”.

“I would caution that group of councillors pushing this sort of stuff – do not become the Taliban wing of the council.

It follows a comment councillor Anne Moran sent in an email to elected members last week suggesting that the city’s Australia Day fireworks be cancelled as they upset “new immigrants because they remind them of the bombing and war they have been traumatised by”.

Moran lodged a motion to ban fireworks in the city, including those at sporting events, but her motion was withdrawn because she left last night’s meeting early.

Earlier last week, she also joined with councillors Phil Martin and Robert Simms to call for a special meeting to call off fireworks at the city’s Australia Day celebrations as a mark of respect to victims and firefighters impacted by the recent bushfires. 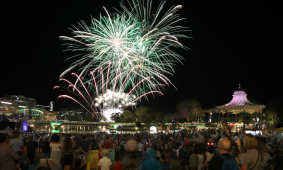 However, that meeting did not go ahead as the group failed to gather a quorum of councillors.

She said this year’s New Years Eve celebration in the city attracted over 50,000 people.

The majority of councillors – minus Khera – voted in support of Hyde’s motion to investigate alternative light displays.