After questions from InDaily, Consumer and Business Services this morning announced that eligible venues would only have to pay $817 to serve alcohol at temporary Fringe activations under a revised fee structure.

East-end venues told InDaily they were previously quoted about $2000 to serve alcohol at next month’s 19-day Rundle Street Fringe party, which sees traffic blocked from 4pm every Thursday, Friday, Saturday and Sunday over the Fringe festival.

The new price cap would not apply if licensees serve alcohol past 2am, or if venues feature sexually-explicit, boxing or martial arts entertainment.

A Consumer and Business Services spokesperson said the cap would also not apply to already-licenced venues that cater for over 200 people.

Since then, other east-end bars and restaurants have come forward saying they are were hit with with exorbitant fees from Consumer and Business Services SA to extend their trading onto the street.

The Adelaide City Council has asked each venue to pay $1881 to cover the cost of furniture hire, storage and closing off Rundle Street to traffic for the 19-day event – a price that all the venues approached by InDaily say they are happy to contribute.

However, there was growing unrest about the approximate $2000 fee previously charged by Consumer and Business Services SA to cover short-term liquor licensing.

Businesses that have two entrances on both Rundle Street and Vardon Avenue were being asked to pay double – totalling approximately $8000 in council and liquor licensing fees.

Maras Group managing director Steve Maras, whose company owns a significant chunk of the property across the city’s east-end, described the previous liquor licence cost as a “money-grab” that would “hurt businesses at a time when businesses should be able to thrive and do well”.

“Anything that is a quick and easy money-grab for businesses who are trying to make ends meet and are obviously looking forward to what the Fringe brings and the tourism it brings, putting them at risk of not being able to trade in the public realm is outrageous.

“They need to overturn it.”

He welcomed news that Consumer and Business Services had “decided to listen to businesses” by introducing a new licence cap, adding that the new price was “very reasonable”.

Andrewartha said he was originally quoted $2086 for a short-term liquor licence for each of his three venues, despite East End Cellars and Mother Vine both having an approximate 200-person capacity compared to Mum Cha, which is less than half the size.

Andrewartha said he originally agreed to pay for licenses for East End Cellars and Mother Vine as he estimated he would get a return on investment, but he didn’t think it was worth extending trading for Mum Cha.

“I think now that I hear they’re changing the price we will open Mum Cha,” he said this morning.

“We didn’t think we would get a return on investment (for Mum Cha), so we decided to decline, which would have been an absolute tragedy for a venue like ours.”

La Taberna owner Miguel Sa was originally quoted an approximate $8000 cost to participate in the Rundle Street Fringe party, because his restaurant opens onto both Vardon Avenue and Rundle Street.

He said yesterday that he was looking forward to the added business over the Fringe period, but was still undecided about whether he could afford the $8000 cost of “adding just a couple more tables” onto the street.

“This is the time that the Government should be helping and supporting small businesses, not just turning them away,” he said.

“It’s the time of the year when the people in the east-end can get busy and rather than liquor licensing saying we can support this they just smash us.”

His call was echoed by Distill director Steven Giles, who paid the approximate $2000 short-term liquor licence cost, which was about the same amount he pays yearly for his existing licence.

“I just copped it on the chin and paid it but at this time of year it should be an opportunity for us as businesses to put the icing on the cake and get people coming into the city,” he said.

A spokesperson from the Attorney General’s office said eligible businesses that that have already paid for a temporary Fringe liquor licence could apply with Consumer and Business Services for a refund. 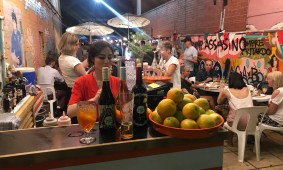 Armstrong told InDaily he is no longer required to pay the original $3193 quoted to serve alcohol at SugaTeca as he could extend Sugar’s existing liquor licence to cover the laneway bar.

“I can confirm that SugaTeca will happen again this year,” he said.