Speaking exclusively to InDaily, Weatherill confirmed he had won a position – his first paid role since leaving office after last year’s March election – as CEO of Minderoo’s Thrive by Five early childhood development initiative, which advocates for “positive, community-level change based on evidence, prevention and collaboration”.

He’ll replace former boss Steve Clifford, who has only been in the role since June.

Minderoo has committed $1.5 billion to a range of philanthropic initiatives, which Weatherill says “makes it an incredibly well-endowed philanthropic foundation”.

“That means you can concentrate on work and not trouble too much about fundraising or sourcing grants,” he said.

Weatherill has been busy with various unpaid research roles but was keen to work in the early childhood area, which he says is “something I’ve been passionate about for many years”.

“The idea of working in that field, I couldn’t think of anything more perfect,” he said.

“I really didn’t think a role like this existed – I wasn’t looking for it, they approached me and it all happened rather quickly.”

The job, however, will mean leaving the state he led for seven years as Premier, and “pulling up stumps with family and possessions and going to live in Perth for an indefinite period, probably three years”.

He said wife Melissa and daughters Lucinda and Alice, now both in high school, were “really positive” about the move.

“Initially when it was first discussed [with Thrive By Five], I said ‘I’m really based in SA for a whole range of reasons’, and I was talking to them about whether it could be managed from SA… but Melissa and the girls said ‘we’re up for an adventure’,” Weatherill said.

“I was surprised, to say the least.”

He says he leaves the state with “mixed feelings”, following predecessors Mike Rann and John Olsen in exiting SA after their time at the helm.

“I’ve spent my life here in the state I love, and there are so many things about it I’ll miss – not the least family and friends,” he said.

But, he adds, at 55 he wants to do something other than “settling into some form of retirement”.

He said he had been offered lobbying roles, but “I’m not keen on being a lobbyist”.

“A lot of very important work is done by lobbyists, but it’s just not my cup of tea,” he said.

He appreciates the irony of a former Premier who campaigned on jobs leaving SA to secure his dream role, but says “I was never on that train” of opposing people spreading their wings.

“I always believed that the idea of people going away and having exciting challenges and hopefully coming back is a good thing,” he said.

“I never really signed up to that sort of rhetoric… it’s natural in a lot of states like SA, that there are always people leaving and coming back again.”

Weatherill notes he always expected while in office that his next role would be outside SA.

“I always thought I’d have to leave, because most elections, the losses, end in tears… and most political careers end in tears,” he said.

“But surprisingly it didn’t feel like that [last year], like an awful rejection where you felt shunned and can’t show your face in public… 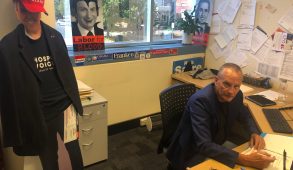 “But I assumed that was how it would end.”

Ultimately though, “there was no push” out of SA.

“It’s really a pull of just a fantastic opportunity,” he said.

“I don’t think people should look at it negatively… they can be proud of the fact a South Australian can be asked to lead an important national initiative in this area.”

He’ll retain key SA connections, with his parents and brothers living here and an ongoing role as an Industry Professor at the UniSA Business School, but says his daughters’ age makes it a good time to relocate.

“We’d like to be living in the same state as our children when they leave school,” he said.