Lucas announced plans to close well-patronised centres at Mitcham, Modbury and Prospect in his September 2018 budget, citing a need for savings across government.

But the move has stalled as the Government considers a broader sell-off of Service SA centres statewide, under a contemplated privatisation of the motor vehicle registry, as InDaily revealed in July.

Lucas revealed soon after the Marshall Government took office that the incoming administration had been locked in to initiating a scoping study for the Registry’s sale under a “secret deal” – with initial negotiations limited to Land Services SA, the consortium that bought the Lands Titles Office from the previous Labor government in 2017.

It later emerged that if the sale proceeded it would also involve privatising the state’s Service SA centres, more than 95 per cent of whose work revolves around vehicle registration.

This week’s mid-year budget review saw the Treasurer cop a small short-term budget hit – $7.8 million over the next two years – while the three centres earmarked for closure last year continue to operate as usual.

“The closure of the Prospect, Mitcham and Modbury Service SA centres has been deferred pending the evaluation the government has been required to undertake regarding the commercialisation of the motor vehicle registry as a result of agreements reached by the previous government in the 2017 contract for the Land Services commercialisation,” the budget papers state.

Lucas says that decision – which was expected by year’s end – has been “a little bit delayed”.

“It was just the complexity of it all – we’ve deferred the Service SA savings task, because it became inextricably bound up with the due diligence we’re having to do on the motor vehicle registry,” he told InDaily.

“We’ll be making a decision early next year.”

Under the terms of Labor’s deal, if the Government does not enter into a privatisation arrangement by next October, it must either repay Land Services SA $100 million or grant it an additional seven-year extension to the existing 40-year term of the Land Services Agreement.

Lucas, though, suggested the closures may not proceed even if the centres were not sold off, suggesting the Department of Planning, Transport and Infrastructure could instead find alternative savings of equivalent value.

“It remains a task for Transport, as with all other savings – they either achieve the saving in that way, or they achieve it another way,” he said.

“We say, from Treasury viewpoint, that’s fine – you just have to achieve the saving in some other way [but] the saving remains with them… it’s not Treasury driving it, [saying] ‘you have to close Service SA centres’.”

However, he noted “if ultimately we didn’t go ahead and privatise, they either have to pursue that [closure] or achieve the savings task in some alternative way.”

Asked if the three cnetres would remain open if sold off to land Services SA, he said: “I’m not going to get into the various implications of that at this stage.”

“All I can say is if we privatise them then we’ll have to explain at that particular time what the implications are,” he said. 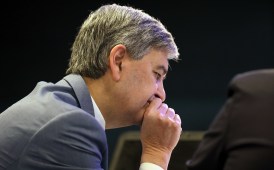 “If we don’t privatise, then the savings task returns to the Department in terms of Service SA, and they’ll have to make their own decision.”

Asked whether it was usual budget practice for departments to meet the value of specific budget measures with alternative savings, Lucas conceded: “It’s unusual, but there’ll have been many other examples where that’s occurred.”

However, Transport Minister Stephan Knoll flagged his intent to proceed with the closures, regardless of the Treasurer’s newfound nonchalance.

Asked if it was still the Government’s intention to close the three centres if the motor vehicle registry is not privatised, his office replied simply: “Yes.”