Addressing councillors at last night’s city council meeting, Verschoor said she had personally witnessed, observed in the media and received comments from ratepayers alluding to the poor behaviour of elected members this council term.

“It’s more of a statement tonight,” she began, introducing her Lord Mayor’s report.

“As you’re all aware as public officers and members of the council, you are appointed to represent the interests of all residents and ratepayers to provide community leadership and guidance, and to promote the interests of the city.

“These objectives can only be achieved while we commit to working together constructively, when we as a governing body work towards upholding the values of honesty, integrity and accountability and transparency, which values in turn generate community trust and confidence in the council.

“Robust debate among members both in the chamber and out conducted in a respectful manner is in keeping with these statutory responsibilities; however, all too often in recent times I’ve witnessed personally, observed in the media and received comments from ratepayers about blatant displays of disruptive, inappropriate or offensive behaviours.”

Verschoor said councillors’ poor behaviour “reflects poorly on how we work” and “allows external opinion to be cast on our ability to govern”.

She called on elected members to “start 2020 with renewed vigour” and to “commit to work collaboratively and constructively so that we may focus on growing our economy, strengthening our communities and creating new experiences in the City of Adelaide”.

“These behaviours affect the reputation and image of the council, and also each one of us personally,” she said.

“As each of you head to our holiday break I urge you not only to make time to enjoy the company of your friends and family, but also reflect on the importance of your obligations as an elected member.”

It comes after months of councillor infighting prompted by the emergence of two voting blocs at Town Hall.

Simmering tensions between councillors aligned with the Team Adelaide majority faction and those who claim to be “independents” spilled into the council’s corridors in May, when InDaily revealed area councillor Anne Moran and north ward councillor Mary Couros were involved into a confrontation during a break at a council meeting.

Soon after, area councillor Arman Abrahimzadeh lodged a formal complaint against Moran after she called him a “dickhead”.

At last night’s meeting, central ward councillor Houssam Abiad, who was credited as one of the instigators of the Team Adelaide faction ahead of last year’s council election, stated “the team exists”. 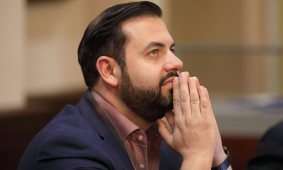 'Another side of the story': Abiad breaks silence on Team Adelaide

That is despite his previous assertions that the councillors aligned with the faction are no longer formally aligned.

“At the last election, democratically, the City of Adelaide elected a group of people to be on this chamber to make decisions,” he said.

“We are working collaboratively today on receiving information and dealing with informational accordingly, whereas some other members are operating in silos.”