Minchin, a former Howard government minister and senate leader, was previously the Liberal Party’s state director from 1985 to 1993 – a period in which the party won the statewide vote at the 1989 election but failed to win enough seats to form government.

That prompted the parliamentary review that spawned an electoral reform referendum in 1991 which saw a “fairness clause” inserted into the SA constitution act.

The clause, which was summarily abolished in a shock parliamentary vote two years ago, held that the state’s electoral boundaries should allow for the party that wins more than 50 per cent of the statewide vote to also win enough seats to govern.

The electoral districts boundaries commission met this week to consider the effect of the fairness provision’s removal, with the counsel assisting the inquiry signalling a rejection of Labor’s bid to instead favour the ‘one vote, one value’ principle – whereby each electorate contains roughly the same number of voters.

Speaking to InDaily, Minchin – a Right faction luminary who oversaw the Liberal Party’s submission to the post-’89 review – said he had been “rather aghast” at the removal of the fairness clause, fearing “we could very quickly fall back into this dreadful bind where the Liberal Party can win the majority of the vote but not get the votes they need [to govern]”.

The Liberals have failed to win government three times this century in elections in which they snared a healthy statewide majority.

“So they now have a challenge next time, without that clause,” Minchin said.

“The demography of SA historically advantages the Labor Party, [so] in the absence of the fairness clause it will only make it tougher for the Liberal Party to retain office.”

He added that “given four years of good government and an advantage of incumbency”, he still believed the Marshall Government “should go into the election optimistic of retaining office”.

However, he said, “the absence of the clause does give the Labor Party an undue advantage in SA”.

“I do think the boundaries that were drawn up before the 2018 election were the best demonstration of the fairness clause being properly applied, and I think that obviously did make a difference to ensuring a fair outcome – and an election victory for the Liberal Party – after a number where they got the majority of the vote but did not win office.”

Minchin said he had pushed for the fairness provision’s insertion, and was shocked to see it expunged without a referendum – despite the Liberal party opting not to contest the matter in court after legal advice.

“I thought myself we had entrenched that clause into the constitution and it could only be removed by a vote of the people, not the parliament… when it was removed I was horrified,” he said.

“I was certainly an advocate for the Liberal Party doing its utmost to reinstate the clause.”

A legislative push to do just that failed to garner the numbers to pass a second reading vote in the Upper House recently, and while the Liberal Party’s submission to the boundaries commission argues “it is in the state’s long-term interest to reinstate the fairness clause”, there appears little short-term prospect of doing so. 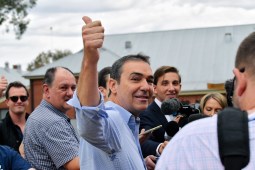 “I was a strong advocate for it at the time, as state director of the Liberal Party, having won the majority of the vote but fallen short by one or two seats in the ‘89 campaign in particular, where we got 52 per cent of the vote,” Minchin said.

“I think the fairness clause was then – and remains – an appropriate mechanism for ensuring fairness in SA.”