After six months of uncertainty, Lucas’s land tax reform Bill is expected to pass parliament’s Upper House, but with more sweeteners required to win over the wavering Greens, who support a controversial crackdown on aggregation but want more money spent on affordable housing initiatives.

In a speech ahead of a second reading vote just before 1pm today, Lucas outlined a major housing and homelessness support strategy, which he said he was announcing “earlier than we had intended”, in a move likely to appease the Greens’ demands.

“The Government will be releasing a major new initiative in state housing, a homelessness support strategy,” he said.

“This is not an issue that has been generated in the last days or weeks, but this strategy has now been approved by the Premier and the cabinet committee of the Government.”

He said the platform’s “essential components will be funded from about $450 million of the SA Housing Trust’s existing cash reserves”.

The strategy will use existing government owned land in the first instance, while any profit generated from the development activity will not be returned to the budget but “will be ploughed back into essential maintenance for existing housing stock”.

Lucas also flagged “a major expansion of the Homestart starter loan scheme”, which will provide for 500 new loans at a cost of $5 million.

“This may well require an increase borrowing capacity for Homestart, which I have the authority to give,” he told parliament.

He said the $400 million of cash reserves would have “no impact on the net operating balance of the government sector” but conceded “this will further increase non financial public sector debt to generate much needed housing activity, but more importantly to try and address the critical issue that our current system is leading to such bad outcomes in housing affordability”.

BREAKING Treasurer @Rob_Lucas confirms the Premier’s Land Tax package will increase state debt. State debt at the last Budget was forecasted to pass $21B, what is the new forecast?

A debt Mr Lucas concedes will not be repaid in his lifetime.

Labor’s shadow Treasurer Stephen Mullighan said Lucas was “paying for social housing initiatives for his land tax deal from the Housing Authority’s cash balance, which is already being depleted”.

Lucas told InDaily after the speech the announcement of the measure was fast-tracked to the land tax debate because “you don’t want to die wondering – would it have made a difference?”

As they make changes to satisfy one party, they lose another – but, welcome to politics

“We’ve only had the Darley deal for a bit over a day, and we’re now working out whether we can still support the Bill or whether more changes are required,” Parnell told InDaily earlier today.

“The dilemma for the Government is that as they make changes to satisfy one party, they lose another… but, welcome to politics, in a way.”

Parnell said it was “no secret” the Greens were keen to “keep the aggregation measures, which we like, but have [the legislation] not be a net drain on the budget”.

After several compromises to various vested interests, he lamented the end result was “so far from the original plan” to raise $40 million a year through an aggregation crackdown that “it’s now a net cost to the budget bottom line, and we’re not happy with that”.

The Government is likely to reintroduce key pieces of policy previously blocked by parliament when it re-opens in the new year, as it faces a fortnight of mixed legislation fortunes.

While land tax is now almost certain to be passed into law, the Government is facing a roadblock to its bid to end South Australia’s statewide ban on genetically modified crops, with Parnell winning Labor and SA Best support to disallow a move to end the moratorium by regulation.

A spokesman for Primary Industries Minister Tim Whetstone said today “we’re 100 per cent committed to lifting the GM moratorium”, but wouldn’t say whether the Government would seek to reimpose regulations or take the longer-term gambit of legislating the changes.

Parnell said the Greens’ position on GM had been “consistent forever”, and “it’s about not just the process, but also about the merits of the issue”.

“What we’re doing is focussing on the very poor process, but it’s very likely we’ll come back in the new year [to consider new legislation]… whether other parties change their position or not remains to be seen,” he said.

But it’s now almost certain the legislative agenda will be wiped clear at the end of the current session, with a 2020 sitting schedule distributed to MPs yesterday, featuring a day set aside for parliament’s reopening after a likely prorogation.

Manager of Government Business John Gardner noted today that “it wouldn’t be an unusual time of the political cycle for the parliament to prorogue”, but added that “no formal decision has been made as yet”. 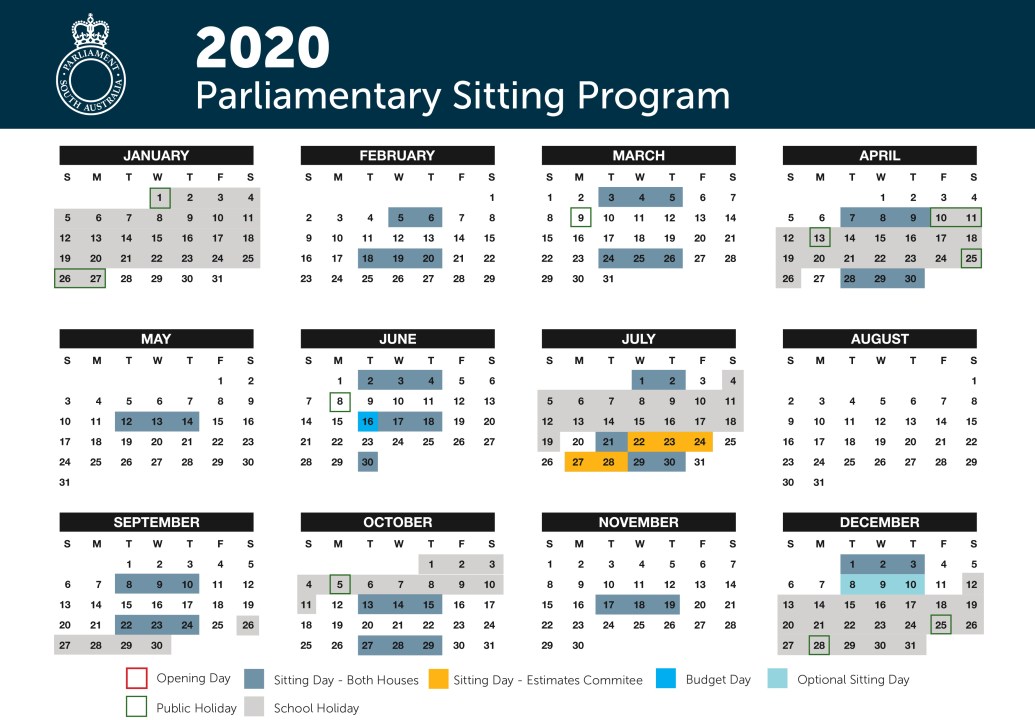 However, it’s understood previously defeated Bills – which are likely to include an effort to cap council rates and a bid to deregulate SA’s shop trading hours – would be returned to parliament once the agenda is wiped clear, as the Government seeks to return to the policy agenda it took to the 2018 election after a difficult 2019.

Lucas said he had not contemplated revisiting shop trading but “it’s obviously an option”.

“It provides that opportunity, and it’s certainly an option I’ll consider over the coming weeks,” he said.