South ward councillor Alexander Hyde told InDaily he would tonight lobby the council to spend about $60,000 on developing a policy response to what he described as a “recent spate of incidences” between Whitmore Square and the south park lands involving a group of about 50 Aboriginal people.

Hyde said the most recent group to reside in the park lands were unknown to locals and had, over the past month, caused public disturbance from problem drinking outside the park lands’ dry zone period.

“This is a seasonal issue and it is one that come up every year, however this year it’s worse than previous years,” he said.

“It’s blown up in my ward. There have been several community meetings and in the region of 100 residents come to these meetings.”

He said the behaviour was “affecting the safety of residents and visitors” and needed to be addressed “as soon as possible”.

In a statement to InDaily, a SA Police spokesperson said that there had been a recent increase in anti-social behaviour in the park lands.

“It is not unusual for Adelaide to experience a fluctuating population at different times of year and police respond accordingly,” the spokesperson said.

The city council’s associate director of community and culture, Amy Pokoney, said that the council was aware of “a range of issues arising from individuals and families from remote Aboriginal communities visiting the city without accommodation”.

She said the council had been working with the State Government and non-government partners to address the issues.

“Council has been listening to residents and local businesses who have been impacted by anti-social behaviour in the south west of the city and has been passing on this information to the relevant authorities such as the SA Police,” she said.

“Council teams are attending daily to ensure that the amenity of the area is maintained and to proactively address matters that arise.”

It comes as the city council will tonight debate whether to match a State Government funding commitment of $45,000 to develop a business case for an inner-city homelessness services hub.

The hub would be built as part of the Adelaide Zero Project, an initiative of the Don Dunstan Foundation that aims to end street homelessness in the CBD.

A report published in February by the Don Dunstan Foundation stated the hub would ideally house the Central Adelaide Local Health Network’s hospital avoidance team and Drug and Alcohol Services SA, as well as other “essential frontline services”.

The $45,000 in Council funding will come from a $200,000 budget provision endorsed by the council in March, which is contingent on further funding from the State Government.

InDaily reported last month that the State Government would commit $237,000 towards the Adelaide Zero Project – surpassing the council’s $200,000 commitment.

But Pokoney told InDaily the council believed only $45,000 of the State Government’s commitment “meets the criteria” set by the Don Dunstan Foundation, meaning the council was not yet prepared to release the remaining $155,000 it set aside.

Hyde, who moved that the council give $200,000 to the Don Dunstan Foundation in March, said he would ask the council to provide about $60,000 from the remaining $155,000 in funding to develop a policy for dealing with Aboriginal people sleeping rough in the park lands.

“They (Don Dunstan Foundation) are the most capable organisation to do it (develop the policy),” he said.

“It is the main forum of all the social services providers and organisations – the Lord Mayor is on their board as well as the (Human Services) Minister.” 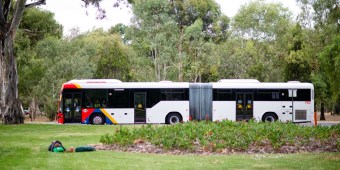 In a statement to InDaily, Don Dunstan Foundation executive director Ritchie Hollands said the Adelaide Zero Project had already been working on addressing the “complex issue” of Aboriginal people sleeping rough in the park lands.

“We need a coordinated response with State Government, City of Adelaide and the Adelaide Zero Project working together,” he said.

Hyde said he would flag the issue at tonight’s committee meeting ahead of a formal council meeting next Tuesday.