It found South Australia has the highest prevalence of hypertension, with Nailsworth and Currency Creek sharing third spot, followed by Stepney and Renmark sharing fourth spot.

The report – conducted by SiSu Health and the Stroke Foundation in 2018 – excluded postcodes with fewer than 100 checks completed and only where SiSU Health Stations were located.

It found that besides SA, only New South Wales had more than one area in the top 10; the Sydney-rringe suburb of Schofields, which was placed number one for hypertension, followed by Victoria’s Sunbury.

Nationally men are at the most risk of high blood pressure – 17 per cent of men had the condition compared to 13 per cent of women – and its prevalence increases with age. 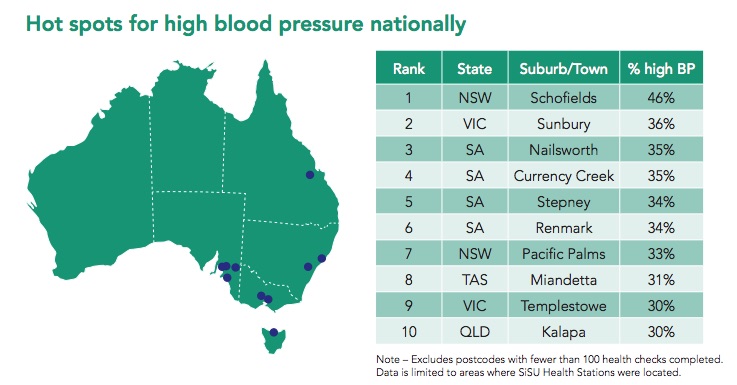 Hypertension effects more than 4.1 million Australians and is any reading of over 140/90mmHg.

It has links to old age, genetics, obesity, smoking, alcohol intake and other factors, but is often referred to as the “silent killer” because it can have no visible symptoms.

Hypertension is a key risk factor linked to stroke – the third leading cause of death in Australia.

“South Australia does have an ageing population and that is a contributor to the rate of high blood pressure in the community,” it said.

“As we age our risk of high blood pressure and stroke increases, but there are things we can do to manage it.

“High blood pressure can be treated with medication and by living with a healthy active lifestyle.

“Stroke Foundation encourages people right across South Australia to have a regular blood pressure check and take action to manage it, if needed.

“South Australians are encouraged to get a health check today – it’s free, fast and could save your life.”