It comes amid fears people could be unknowingly living or working in firetraps, with the State Government still refusing to name the buildings identified in a recent report as being clad in dangerous aluminium composite panels (ACP).

In a statement to InDaily this morning, Knoll criticised a decision made at last night’s city council meeting to publish the locations of the city buildings identified as being at risk.

The council endorsed the move, led by north ward councillor Phil Martin, on the proviso that it would first seek State Government approval.

“Mr Phil Martin’s motion is nothing short of a reckless publicity stunt that will increase the risk to public safety,” (Minister) Knoll said this morning.

“Security and safety are the primary reasons that we do not reveal the exact locations of buildings with significant cladding issues in line with other states around the country.”

The statewide audit of potentially flammable buildings launched in 2017 in response to London’s Grenfell Tower disaster, in which 72 people died after a fire spread rapidly up the building’s external cladding.

Following this month’s release of the audit’s findings, the State Government instructed local councils to ensure that owners of identified buildings took the “necessary actions” to reduce risk to an acceptable level, and that tenants were also informed of the findings.

The city council’s administration noted in a report that its Building Fire Safety Committee had sent letters to the owners of city buildings identified in the audit.

“The correspondence contains the risk rating and any potential rectification actions that are required within a specified timeframe,” the report stated.

But Martin argued last night that all South Australians deserved to know which buildings posed as fire hazards, including people looking to purchase properties in the city.

“This is a pretty sorry affair… there is no transparency around this and when I asked for transparency the Minister – Minister Knoll – called me ‘reckless’,” he told the chamber.

“The State Government is pulling the city into this web of secrecy and I want our administration to go to the Government and say, ‘we don’t want to be a part of this’.

“I’m not suggesting that we publish immediately the list of buildings but I am asking that we do that (in time).”

Moran said she was disappointed that the council would only reveal which buildings were identified in the State Government’s report following approval from the Minister.

“Where’s the humanity in this?,” she questioned.

“What would happen if one of the skyscrapers went up (in flames) with children and young families and everything inside while we were pending approval from the State Government?”

A letter sent by the Local Government Association on Thursday to all councils – seen by InDaily – outlines legal advice sought by the association in relation to the publishing of building addresses identified in the State Government report.

According to the LGA, the information in the report has “protected status” authorised by Minister Knoll.

“The register and information contained therein as compiled, remains the property of the Minister,” the letter states.

“Accordingly, it is not council-owned information that is available for public release.”

The letter stated that if a council was to breach the “protected” order and publish the information, it would be responsible for any civil liability claim by a third party for property damage, financial loss, loss of reputation or personal injury.

City council CEO Mark Goldstone said last night that if the council released the list of the identified buildings it could “put in jeopardy” its insurance cover.

“There is a very real insurance concern for us as a council,” he said.

“Should the State Government authorise our release, we would obviously work through that process.

“We can’t put our ratepayers at risk.”

Area councillor Franz Knoll, the father of Minister Knoll, said councillors who supported the council revealing the list of identified buildings were using “rhetoric and exaggeration”.

“You cannot take the tragedy of the Grenfell Tower and how it unfolded as something that is here,” he said.

“This over-exaggeration is part of the problem.

“(The response) is being done in a measured way, in a cautious way, so that we can provide outcomes but not make things worse.”

Martin said a public release was necessary to ensure workers and tenants were adequately informed of the potential fire risks in buildings.

“For our office buildings and residences the only obligation of the landlord or owner at least is to say to a tenant ‘you are living or working in a building that has ACP combustible cladding and you may be in danger’,” he said 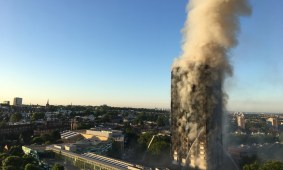 “We’re relying on building owners to do the right thing.”

But Minister Knoll said Martin should “turn his mind to the possible ramifications” of publicly releasing information about impacted buildings to the general public.

“As a government, safety is at the forefront of all our decisions and that’s why we will not be disclosing the exact locations,” he said.