The Art Gallery of South Australia has confirmed to InDaily it is working with the Adelaide City Council to unveil the four-storey high, five-tonne piece by renowned New South Wales artist Terrance Plowright next year.

Originally titled “Uniting a Nation”, the aluminium sculpture was commissioned in 2013 after a handshake agreement between philanthropist Basil Sellers and then NSW Arts Minister George Souris.

The pair intended the piece to be placed near the Sydney Opera House, one of the world’s most recognisable landmarks, but the plan faltered when former NSW Premier Barry O’Farrell resigned, and Souris was dumped from his ministry.

Three NSW councils then bid for the piece, but Sellers instead donated it to the AGSA in January last year.

At the time, Adelaide City Council, which is working with the gallery to present the artwork, decided its new home would be astride a podium in the middle of the River Torrens.

But moving the piece from Plowright’s studio in NSW’s Blue Mountain to Adelaide was delayed due to its size and freight costs.

The council announced in May this year that the AGSA was eyeing a new “high-profile” location for the sculpture at the corner of War Memorial Drive and Montefiore Road, near Tennis SA headquarters.

In response to questions from InDaily, an AGSA spokesperson said the sculpture – derided by city councillors in May as “phallic” and “hideous” – was still located at Plowright’s studio.

The spokesperson said it was now confirmed that the sculpture would be placed on War Memorial Drive, but the scale and engineering complexity of installing the piece meant it would not be unveiled until 2020.

“All public art initiatives require extensive research and due diligence, these processes reflect the standard safety requirements taken by the Adelaide City Council and AGSA due to it being in a public space,” a statement said.

AGSA said it had identified ways of transporting the sculpture to Adelaide and would “consider the best path when required”, with road transported the preferred option.

In May, the council’s Associate Director of Community and Culture Anne Rundle announced the sculpture would arrive in Adelaide once investigations had been completed and key stakeholders – including Tennis SA and the State Government – had been consulted.

The Art Gallery’s spokesperson said consultation with stakeholders “continues to be… positive and rigorous”, with “all stakeholders positively engaged in the process”. 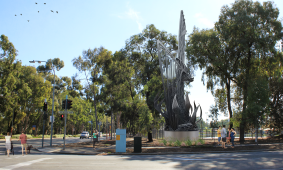 Rundle estimated in May that maintaining the sculpture would cost city ratepayers around $30,000 a year.

“In this location, the sculpture will provide a spectacular entrance to the sporting and venue spaces in the centre of the city,” she said.