Under South Australian inclusionary zoning guidelines, residential developments should include at least 15 per cent affordable housing if they are within a designated housing zone.

Affordable homes – priced under $354,000 – must be offered to low-income earners and social housing providers for 30 days before the housing can be released to the open market.

The policy was introduced in 2012 and aims to address the state’s growing rate of housing stress, which, according to the Productivity Commission, impacts 35 per cent of South Australians on low incomes.

But an Adelaide City Council report released last week reveals since the provisions came into effect, only five of 25 eligible developments in the city include at least 15 per cent affordable housing.

“In theory, some 345 affordable apartments should have been delivered through the inclusionary zoning process and sold to eligible buyers,” the council report states.

“The existing system is therefore not delivering the desired outcomes.”

According to the council, less than two per cent of city properties sold over the last two years were affordable to low-income households.

Less than 10 per cent of dwellings sold over the last two years were affordable to medium-income households.

The report paints an equally bleak picture for those forced into private rental, revealing a quarter of city residents are experiencing rental stress, with 30 per cent of their gross weekly income spent on rent.

Shelter SA executive director Alice Clark, who has previously advocated for an increase to the 15 per cent affordable housing target, described inclusionary zoning as a “very clunky mechanism”.

She said South Australia had one of the highest inclusionary zoning targets in Australia, but it was not being adequately enforced across local government areas.

“Most of the housing just goes onto the open market anyway so it is not really working.”

According to State Government guidelines, developers who do not include affordable housing need to show a “clear planning rationale” as to why they cannot meet the provision.

However, according to National Shelter, developers can contest this policy and developers often find it difficult to replicate an affordable housing project on private land without financial incentives or subsidies.

Clark said the policy also failed to help those most in need of affordable housing, as the $354,000 price point was out of reach for households in the bottom two income quintiles.

“When they say affordable, it’s more aimed at workers like teachers, police, nurses who might not be able to afford a property in the full market,” she said.

“Affordable housing can also be quite stigmatised – the (affordable) apartments look noticeably different from the apartments surrounding them, they’re a lot smaller and they have less amenities.

“We need to think about the way we build differently so developers are incentivised rather than forced into a bureaucratic process that no one likes.”

Tomorrow night city councillors will debate whether to address what the council report describes as a “policy gap” in social and affordable housing for the city.

The council’s administration has recommended councillors support the development of a policy that would align with the State Government’s 10-year Housing and Homelessness Strategy, which is due to be released by the end of this year.

“In recent times, there has been an emerging awareness of this policy gap and an increasing desire to work towards addressing it,” the report states.

“All forms of housing, homelessness and support services are inter-related and cover a number of programs across council that would benefit from an overarching policy approach.”

A recent national housing survey conducted by the University of South Australia and University of Technology Sydney found that 55 per cent of the 200 surveyed councils had a housing strategy, policy or plan.

“We (Shelter SA) would love to see the Adelaide (City) Council do better and take more responsibility when it comes to housing affordability, especially as over the years they have often said it is a State Government issue,” Clarke said.

“We need consistent approaches across governments and it’s clear that local government does need to step in.”

Area councillor Robert Simms, who moved in February for the council to consider options to increase the city’s social and affordable housing stock, said he would support making the 15 per cent inclusionary zoning target mandatory. 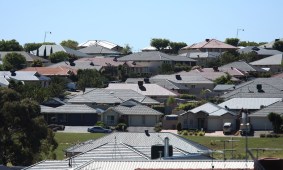 He said he would also support the development a new affordable and social housing policy that would look at how the council could partner with housing organisations.

“The problem with the existing regime is that it is not working in practice,” he said.

“There are some really good ideas put forward about what we can do and I think partnering with relevant organisations to increase the stock of social and affordable housing in the city would be a great step forward.”

Lord Mayor Sandy Verschoor said she was supportive of the council exploring how it could increase affordable and social housing stock in the city and looked forward to the discussion at tomorrow night’s committee meeting.