He said international capital would increasingly be seeking out stable, “boring” Western economies like Australia’s over the next ten years, and that the key question was the degree to which South Australia could carve out its slice of that investment.

Meanwhile, over the next decade:

Kuestenmacher is the director of research The Demographics Group, led by fellow demographer Bernard Salt AM.

International investment institutions will increasingly seek out stable, Western democracies in which to place their capital, said Kuestenmacher.

“We will see international capital seeking out Australia for sure over the next decade, and it is South Australia’s role to make sure how can we actually get a fair share,” he told the audience at the Adelaide Convention Centre on Friday.

“In a world where we might think maybe things are getting a bit more unstable, a bit more risky, (Australia enjoys) a blessing of distance.

“(Investors) are looking for the most boring, the most vanilla economy (they) can – and man, do we have a treat for you.”

Meanwhile, forecast population growth over the next decade is likely to match the growth seen during the last one – but the distribution of the population will shift significantly, he said.

Population growth will likely skew towards people of an average age of 42 – the time of life during which most people are earning and spending more money than at any other time.

You might suffer a bit, but take one for the team.

“You’ve already (been) through a couple of promotions at work, so income is nice and high, you have 1.8 kids, and that means that every single penny that you earn goes straight out the door,” he said.

“Fantastic news for the economy.

“You might suffer a bit, but take one for the team.”

A contraction in the number of people aged in their fifties by the year 2029 is likely to make hiring for some top level executive positions difficult, but benefit members of Generation X, who will be in greater demand for those positions.

“(It is) great news if you are in your forties right now and you are eyeing the top jobs”.

“That is very nice for you.”

Equally, business owners will have to account for the severely divergent lifestyles and values of their customers.

“South Australia is a very special state because it is the only state on the Australian continent where … nuclear families – your classic mum, dad and the kids standard picture perfect family – isn’t the largest household group,” he said.

“The largest household group in South Australia is singles – and this is not because we have all those flats and homes filled with Sex in
the City type of singles.

“This is largely driven by elderly (households) … a couple, where the husband died.

He said this was only forecast to grow, with major implications for the retail sector.

Depending on your business, you actually want your population distributed about as many households as possible,” said Kuestenmacher.

“It doesn’t matter whether you have one or 10 people in the house. So for certain types of businesses, this is excellent news.”

“But the other segments are significantly faster in their growth.”

The numbers are dire if you compare them the rest of the country, which boasts growth rates roughly double those of South Australia.

However, Kuestenmacher argued, this might be the wrong comparison to make.

“That is only if you benchmark it against Australia … which is a massive global growth (region),” he told the audience.

“If you compare this to Europe, these figures stack up beautifully.

“South Australia functions more like a European country than Australian state in terms of the demographic makeup. So if we were to invite mayors from Greece, from Germany, from Spain here, they would actually be drooling, looking at the South Australian figures.”

SA businesses survive where others fail

One area where South Australia can hold its head high nationally is in the resilience of its new businesses. 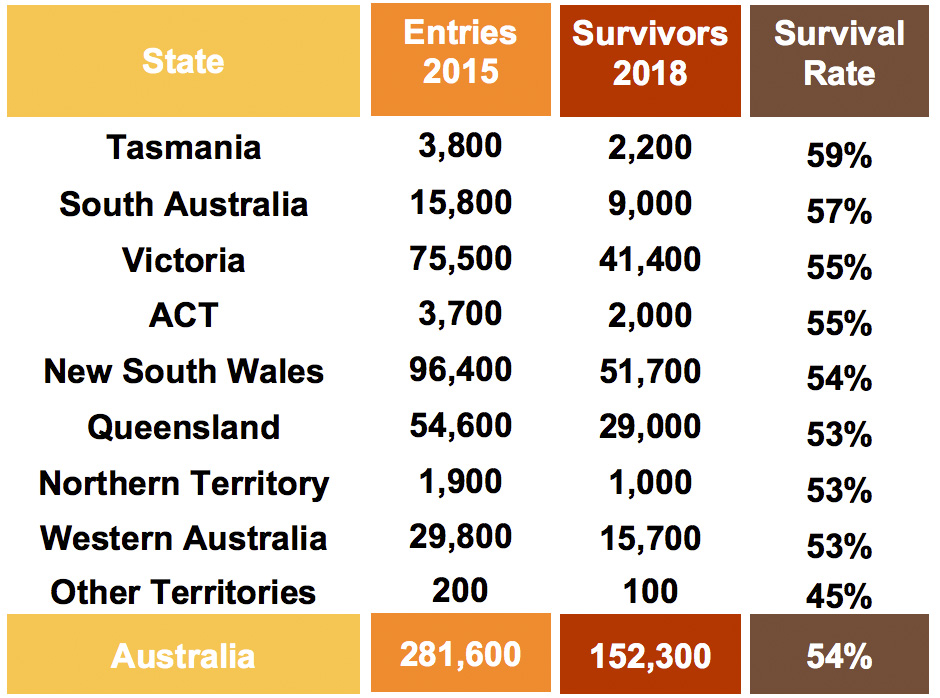 Three-year survival rate of new businesses by state across Australia, 2015 to 2018. Table: The Demographic Group. Data: Australian Bureau of Statistics.

“This is a great place to do business,” said Kuestenmacher.

“You are more secure to do business here (than other states).”

“That’s the kind of message that you want to send out to the entrepreneurial community … you can set up shop very successfully.”

A major challenge for South Australian society – as much as its economy – will be a hollowing out of the workforce, Kuestenmacher argued.

He said the construction industry, which has been hit hard over the past year amid a slowdown, has historically delivered many of the medium-skilled jobs that other sectors of the economy are failing to offer.

“The construction industry is absolutely crucial for social cohesion in Australia because we are not creating new middle skill jobs,” he said.

“The Australian economy has tons of ideas of how to create highly skilled knowledge jobs, and how to create poorly paid, low skilled gig economy jobs, plenty of ideas and both fields.

Businesses that are able to great middle-skilled jobs will helping the Australian middle class “to not go into decline”.

“We’re hollowing out the workforce very quickly,” he added.