Independent MP and former Valuer-General John Darley has told InDaily he does not support the Marshall Government’s planned changes to the way land tax is aggregated, despite this week’s concession of reducing the top rate to 2.4 per cent.

He says he’s preparing several amendments if the proposed Bill gets the numbers to past the Upper House, warning the legislation as it stands will have a trickle-down effect that could hit vulnerable tenants.

That view was echoed today by property mogul Theo Maras, who arrived back in Adelaide on Wednesday night after three months in Greece, where he spends time each year having stepped back from running his family’s development group.

“This is nothing but a debacle,” he told InDaily.

“I’ve been away and I’ve watched this from afar, and what I’ve seen is nothing but a Roman Caesar-type tax collection process [where they] imposed a tax on the church, and let them pass it down to the people.

“In this case it’s on property, so the Government’s not seen as hitting the people directly – it’s a process where you use someone else to collect the tax… and that to me is something that personally I detest.”

“I feel as if I’ve become a tax collector on behalf of the Government.”

He said investors would not personally pay the impost of aggregation changes, but rather “they’re going to pass it on and it gets passed on and on”.

“And worse, the money’s going into the big black coffers to be spent for what?” he said.

Maras, who has long been a supporter – both politically and financially – of the Liberal Party, now says “we have a Government that’s addicted to tax, for the monetary dependence of the state”.

“You know what they should be concentrating on? How they spend the money – not collecting more, and unwisely spending it.

“At the moment we’ve got a Government that’s just going out there and spending everything they’ve got and putting us into further debt.”

Maras said he now felt “absolutely betrayed” by the Liberal Government, “and whatever it is I thought was Liberal and aspirational and building up the state has fizzled out for me – it’s dried up”.

“So much so that I say that the Treasurer and Premier should really have a good hard look at themselves.”

But Lucas today enthused about a range of positive responses to his revised land tax gambit – including property developers, small investors and economists – welcoming “the groundswell of community and business support for [these] historic land tax reforms, which will put $70 million back into the pockets of tens of thousands of hardworking South Australians over three years”.

While Maras himself has remained publicly silent in his absence – save for the odd Facebook observation – the Maras name has been front and centre in the land tax debate, with his son Steve active in his role as president of the SA Property Council, which has led the charge against aggregation.

Steve Maras says while many investors have welcomed the reduction in the top rate from 3.7 to 2.4 per cent from next July, SA remains relatively uncompetitive because the top rate is levied at a much lower threshold than every other state except Tasmania.

“No-one has actually talked about the comparison of the rates and thresholds with the rest of the country,” he said.

“This is all a furphy that we’re better off.” 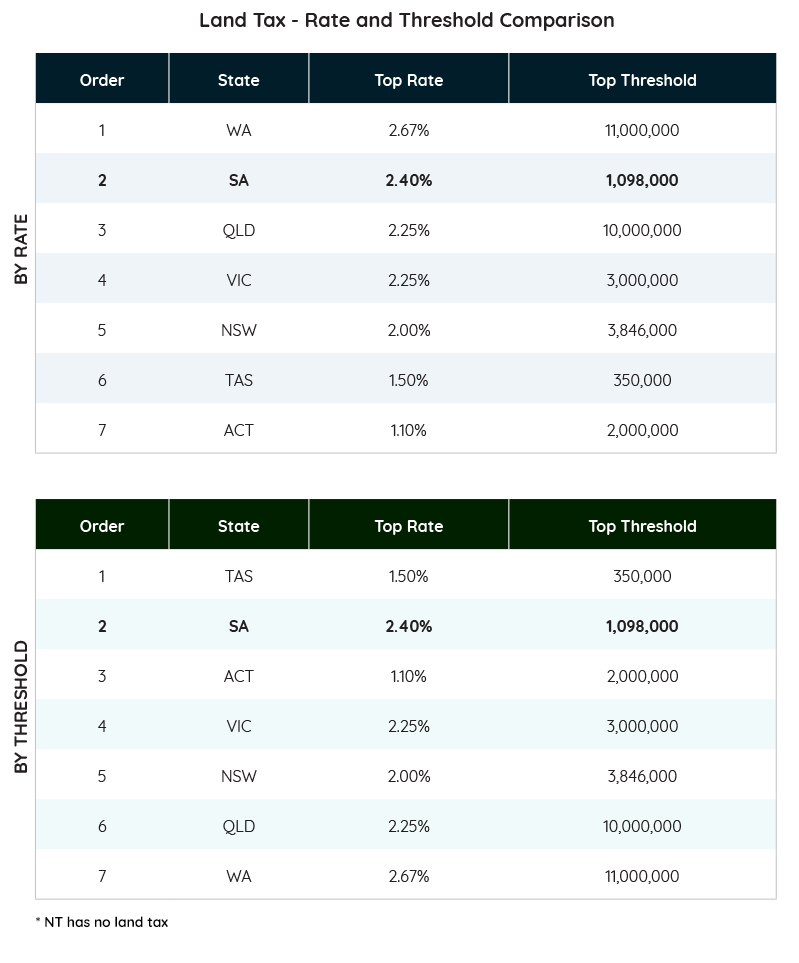 Maras says he has little faith in the Government’s insistence that 92 per cent of individuals and 75 per cent of company groups will be better off, after the Government initially scoffed at the Property Council’s previous assertion that the June budget’s $40 million estimate of the aggregation windfall had underestimated the true impost by a factor of three.

“All along they were calling us mischievous, fanciful… then 87 days on, and guess what – we were right!”

He also rejected the Government’s assertion that there had been consultation on the original proposal, saying there had been no genuine engagement with industry bodies such as the Property Council – and poured scorn on the current consultation process after Treasurer Rob Lucas insisted this week he was regardless “determined to make changes to the aggregation provisions”.

“There’s been no consultation on the policy since it’s announcement – they’re saying ‘we’ve been out there consulting’ [but] don’t you think at least the industry bodies should have been consulted?

“Now we’ve been told there’s a consultation period, but Lucas says there’ll be no structural changes to the bill – if there’s not going to be any structural changes, what are we consulting on? Fullstops and commas in the Bill?”

Both Maras men insist the “real issue” is the ongoing Valuer-General’s revaluation, with Theo calling the current predicament “a total bloody mishmash”. 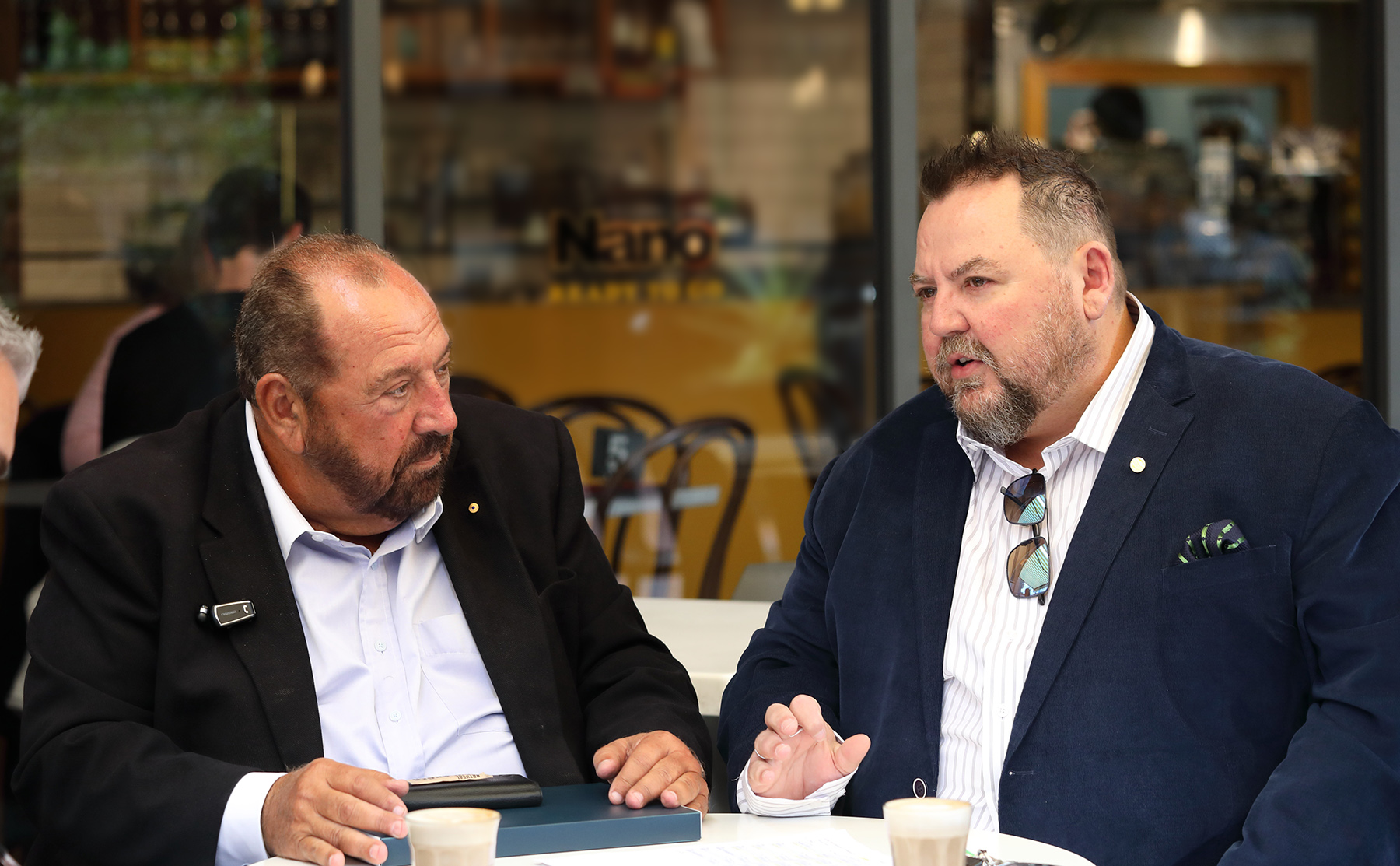 “How the hell could a government be sitting down to do a budget on land tax, knowing that there’s a revaluation taking place and they’re not able to estimate what the revaluation’s going to be?” he said.

“You’ve got Treasury over here doing their modelling in total darkness, and you’re telling me this is a thought-through system, or that this is a Government that’s got control of what they’re doing? Of course this is not the case.”

The Marases label the aggregation reform “an aspiration tax”, with Theo saying: “Where’s the incentive for a South Australian to invest in this state?”

“Where’s the aspiration for the state as a whole?” he said.

The land tax legislation’s passage through parliament will depend largely on the Opposition, but if Labor blocks the Bill the Upper House crossbench will become crucial.

“Most concerning is the effect these changes will have on relatively small investors who have a handful of properties usually purchased to assist with their financial security in retirement,” he told InDaily.

“These investment properties aren’t usually extravagant and often have tenants who have a low income. I have spoken to many property owners who have said they will have no choice but to sell if the land tax changes go through as they are.”

He’s also concerned the market uncertainty has already “made the bottom fall out of the investment market”.

“Given the public housing waiting list has approximately 26,000 people on it, I worry that this will only exacerbate the housing shortage and may increase homelessness,” he said.

Darley proposes allowing properties with low income tenants to be assessed for land tax on a single holding basis, given “these landlords are helping the government with providing low-rent housing”.

Maras joined the chorus on social media this morning defending Unley dentist and former Liberal member Timothy Goh, who was called out by Liberal insiders in the national press for his self-made affluence after speaking out on the aggregation changes.

Lucas yesterday did not specifically deny knowledge of “which members of the Liberal Party provided information about Dr Timothy Goh to The Australian newspaper”, but instead amplified the attack, telling parliament: “If he happens to drive a Bentley, and I understand a Lamborghini and a variety of other luxury cars, good luck to him.”

“We celebrate the achievements of people who work hard and who do well. Dr Goh is one of a group of people who have been outspoken critics of the government’s policy, and good luck to them. They are entitled to their views I don’t agree with them. They share a number of posts between them. They have described me as Idi Amin, Dumb and Dumber, stupid, a liar and a variety of other unflattering descriptors, but good luck to them. I am happy to engage.”

Goh was not responsible for calling Lucas Idi Amin, while the Dumb and Dumber moniker was coined by property developer John Culshaw at last week’s Property Council forum.

Maras wrote on Facebook the Liberals “want to start a class war [and] gag someone who stood up for the Australian Dream”.

“As proud as I am of having worked as a labourer, trench-digger, waiter, gut cleaner, glass sorter…

“By your actions… you have created a monster that will devour you.”