Renewal SA bureaucrats will tonight give city councillors a presentation on how the State Government agency is transforming the former Royal Adelaide Hospital site into “innovation hub” Lot Fourteen.

As part of the development, Renewal SA last month sought city council approval to remove ten Chinese and English elms and one plane tree lining the northern side of North Terrace from Frome Road to the front of the Bice Building to create what it describes as a “seamless entry” to the redeveloped site.

According to a council report, the 100-year-old trees would be replaced with an “uninterrupted green walk” paved with “high-quality natural stone paver”.

The council decided to defer its vote to remove the trees at a meeting last month, with Lord Mayor Sandy Verschoor accusing Renewal SA at the time of failing to properly brief the council on how it intended to transform the North Terrace streetscape outside Lot Fourteen.

“This evening Renewal SA will provide a presentation on Lot Fourteen to help inform elected members’ future decision on the trees,” Devenish said.

“Following tonight’s presentation, and subject to Council’s feedback, we will provide a further report for consideration at committee on 17 September.

“The matter would then go to a final vote at Council on Tuesday 24 September.”

According to a State Government media release sent last month, the Lot Fourteen “public realm” works are scheduled to start in stages, with the first stage due to begin this month and be completed by early 2020.

InDaily asked a Renewal SA spokesperson if the delayed council vote would impact progress on the Lot Fourteen development.

“Outside the Lot Fourteen North Terrace boundary, State Commission Assessment Panel has provided development plan consent for significant and regulated tree removal, which is conditional on landlord consent from the City of Adelaide. 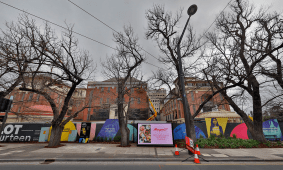 “Public realm works will not commence on the footpath section of North Terrace until landlord consent has been provided by Council.”

“Rather than delaying a decision on this the council should rule out removing these historic trees,” he said.

“Just last week we declared a climate emergency. To rip up 100 year old trees would be pure madness.”