Hyde’s motion calls on councillors to oppose the Bill on two grounds: its potential to impact planning decisions for the city council, and the “anticipated prevalence” of on-street solicitation in the CBD that he said could result from the Bill passing.

The motion requests that Lord Mayor Sandy Verschoor write to all lower house MPs “informing them of what Council’s position is and why”, without endorsing “a position either way on the merits or otherwise of sex work decriminalisation”.

Five councillors told InDaily this morning that they supported further consideration of the Bill and its impacts on the council, meaning Hyde’s motion is likely to win support from the majority of the chamber at Tuesday night’s council meeting.

Hyde, a self-described “pro-decriminalisation” supporter, said he understood the “risks and vilification that sex workers face”, but he claimed the Bill was yet to consider the impacts decriminalising sex work could have on local government areas, including the city council.

“It’s unfortunate that no supporters of the Bill have bothered to consult with the City or the local government sector broadly on how it might work in practice,” he said.

“For me it’s not a question of what but definitely how.

“It will see the Council Assessment Panel (CAP) responsible for planning decisions on whether to legalise brothels and I don’t think this is something CAP is equipped to do.

“Moreover, if CAP approves a brothel and the objectors take that decision to court, it’s the council that funds the legal defence of CAP’s decision.”

Hyde said planning regulations required to implement the decriminalisation of sex work were yet to be drawn up.

“We don’t really have the detail here and that greatly concerns me,” he said.

“This isn’t just any other business, and that needs to be acknowledged by the Bill.”

He also claimed that it would be “reasonable to expect a concentration of street solicitation in the city”.

“The Bill does not place any restriction on where solicitation can occur and that lack of regulatory rigour is a big problem.”

The Local Government Association said it had no formal position on whether sex work should be decriminalised, but “there have been some concerns about potential impacts on local councils”.

“If Parliament does pass the proposed legislation, there will need to be clear policies developed in consultation with councils and their communities on where sex work premises should be permitted to operated,” a spokesperson said.

The LGA also warned the legislation could result in a rates hike, “and it shouldn’t be assumed that councils are the most appropriate jurisdiction to regulate sex work activities should they become legal”.

Local Government Minister Stephan Knoll, who is on the right faction of the Liberal Party and who intends to oppose the Bill, said the state’s local government sector had raised concerns “both formally and informally” in relation to the Bill.

“Councils would essentially need to regulate where in their communities they would allow brothels to operate, a difficult decision especially when I assume most communities wouldn’t want a brothel in the first place,” he said.

While abstaining from suggesting that decriminalising sex work would impact the Adelaide City Council directly, Lord Mayor Sandy Verschoor said it was “worth considering” where the regulatory burden would fall.

She also said there would be likely “social impacts” in areas such as Hindley Street “where congregation would likely occur”.

But Franks denied that councils would be burdened if the Bill passed, rather they would benefit from extra rates revenue.

“The council collects rates from brothels,” she said.

“If they want to pass those rates over to the State Government to administer their responsibilities, then that’s an entirely different conversation, one that I’d be interested to see if the councillor (Hyde) wishes to have.

“Councils would just be required to do what they do, which is to plan, develop, collect rates and serving and supporting their communities.

“No council would be expected to sniff sheets or patrol people on the streets as a result of this legislation.”

Franks said it was “pure fantasy in the mind of councillor Hyde” to suggest that on-street soliciting would become more concentrated if her Bill passed.

“He (Hyde) seems to ignore that this has been through a select committee process that took over two years and had quite a substantial report.”

Hyde was also accused by councillor Moran, a “Liberal sympathiser”, of “trying to pull stunts” after previously criticising fellow councillor Simms of lodging motions that fell beyond the council’s remit.

“I think it’s very strange of Alex to do this because he’s been a very loud voice against Rob Simms’ left-wing state and federal issue actions or recommendations,” she said.

“In my view, the council is the handmaiden of the State Government in running the city, not in politics, and whatever they decide we just have to suck it up and do it.

“We saw with the state executive of the Liberal Party that there’s a take-over from the right and I think sadly this is the first time we’ve seen really obvious party politics being played out and the council being used by the party to try and affect State Government legislation.” 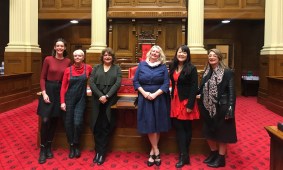 But Hyde dismissed Moran’s critique as “diversionary rubbish and a cheap shot”.

“I hold no position inside the Liberal Party,” he said.

“Clearly my motion is about the effects on the City of Adelaide.”

The Statutes Amendment (Sex work Decriminalisation) Bill was introduced in the lower house on July 31, with MPs scheduled to be briefed on September 9 before debate commences.