Premier Steven Marshall last week withdrew South Australia from a national bid for the 2023 soccer showcase, arguing “what was on the table” from Football Federation Australia was “just not a good deal”, and insisting that “Adelaide Oval is really not an option” as a venue.

That leaves Coopers Stadium in Hindmarsh, which FFA has previously insisted is not fit for purpose, although that may change with soccer’s governing body currently reconsidering its options in light of an expanded World Cup event, with 32 nations to take part, up from the previous 24.

Tourism Minister David Ridgway went further, telling ABC Radio FFA would “want Adelaide Oval exclusively [for] sort of six or seven weeks… which means, I suspect, three home games for both [AFL] teams in the middle of the season, and we just said we’re not prepared to do that”.

“There’s a cost to bid and then there’s also compensation for the Crows, the Power, the Stadium Management Authority – there are way too many variables,” he said.

But several documents relating to the original Stadium Management deal suggest the Government is under no such obligation to compensate the SMA for any lost business.

The original SANFL licence deed, signed off by the previous Labor Government in 2011 and tabled in parliament in May 2012, gives the relevant minister the right to “priority use of the Adelaide Oval Core Area for the purpose of staging [an] International Event”, provided the minister gives at least two years’ notice.

Such an event is defined as “including, without limitation, any FIFA World Cup, Olympic Games, Commonwealth Games, FIFA Asian Cup, Rugby World Cup, International Cricket World Cup or any other international event of which the State gives [two years’] notice”.

It’s a fascinating deal – the Government’s got the right to say, ‘We’re having an international event’ and give two years’ notice

A SACA prospectus distributed to members before a crucial 2011 vote that gave the Government the green-light to proceed with the Oval upgrade similarly specifies that cricket and football’s “long-term priority-use licence to unrestrictedly and exclusively use Adelaide Oval” was “subject only to the right of the State Government to stage international events such as the Olympic Games or the FIFA World Cup”. 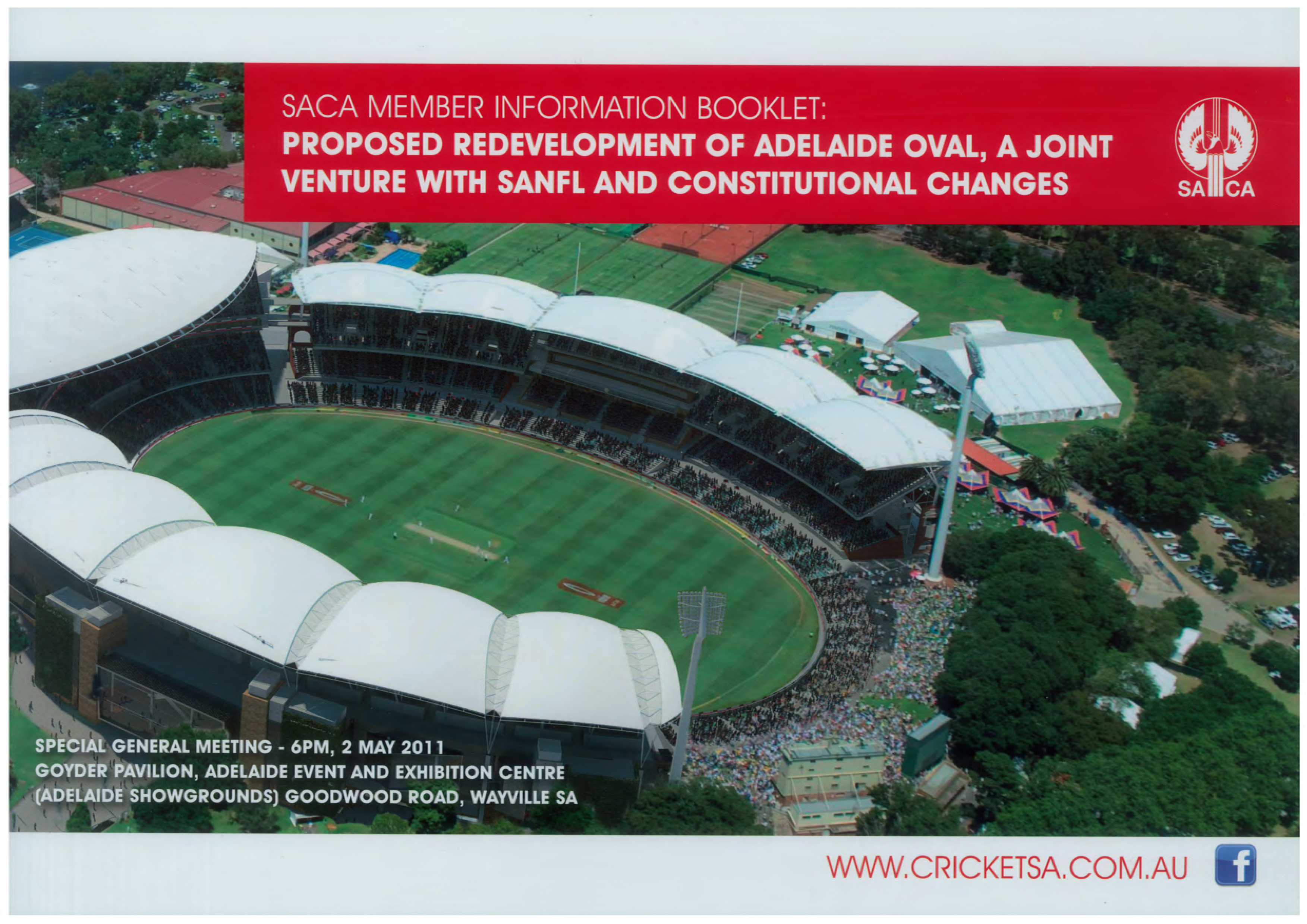 The cover of the booklet and below, a highlighted passage detailing the Government’s rights. 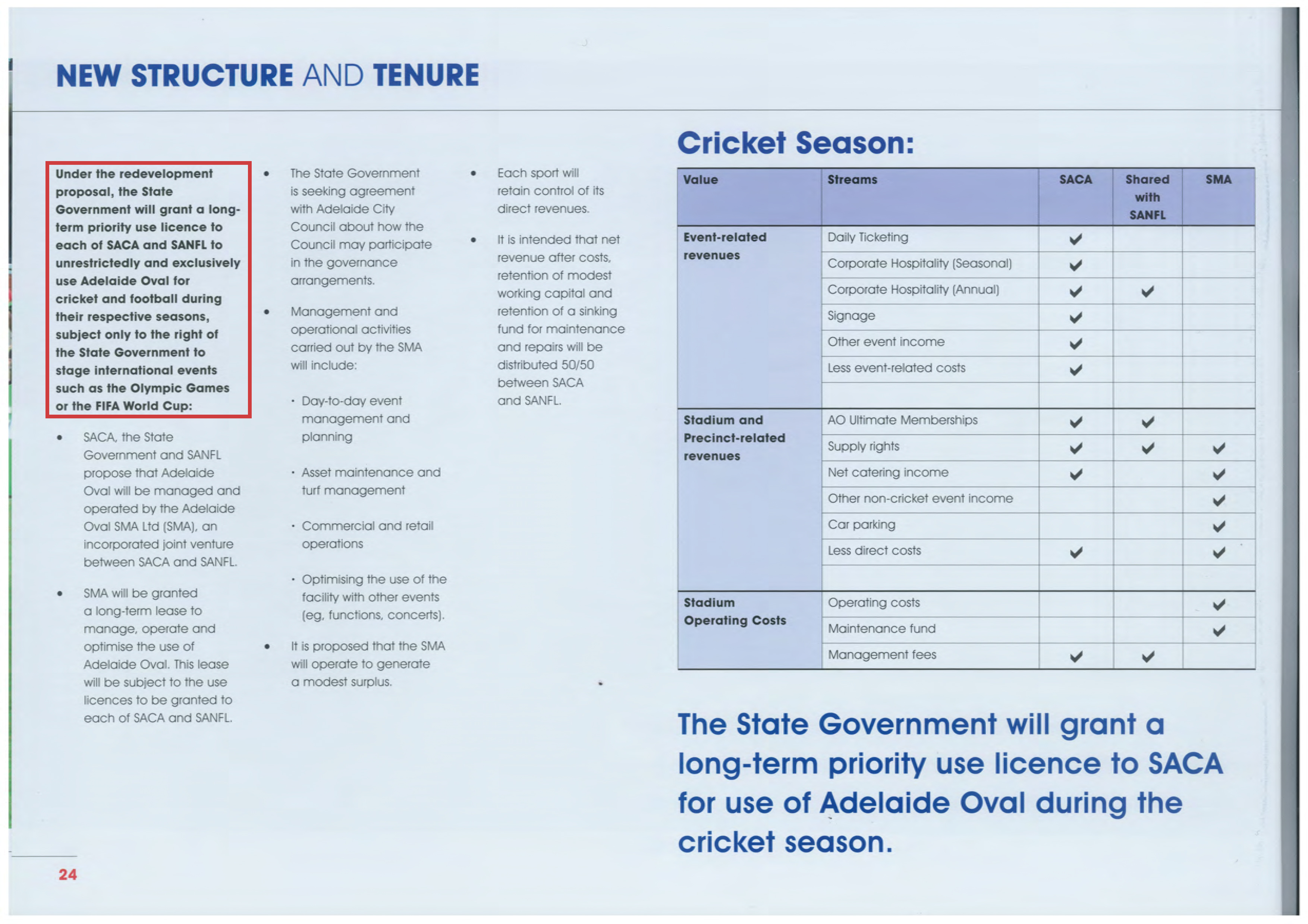 This was reinforced in March this year by SACA chair Andrew Sinclair, who told a parliamentary select committee into the controversial Oval hotel development that the Government had the right to use the facility for events such as Commonwealth Games.

“It’s a fascinating deal,” he said at the time.

“That was wisely put in [to the deal] for the government.”

Both the Adelaide and Port Adelaide Football Clubs confirmed to InDaily that no approach was made to them by the State Government about using Adelaide Oval as a hosting venue for the 2023 Women’s World Cup.

The AFL is yet to respond to inquiries, but Marshall today suggested the league had similarly not been approached.

“We had discussions with the SMA,” he told InDaily.

“As part of that bid the Adelaide Oval would need to be turned over to the FFA for a six-week period and this just not something the SMA was prepared to consider… my understanding is the SMA has made representations to us that taking Adelaide Oval offline for a six-week period would be a disaster for them and for their program, and we accepted that.”

Asked whether there was a contractual obligation to pay compensation to the Crows, Power, AFL or SMA for staging international events, Marshall said: “I just don’t have that contract in front of me.”

But he conceded the Government wasn’t obligated to ensure the SMA returned a profit.

“I don’t think we’ve got an obligation there,” he said.

“The taxpayers of SA have invested in a facility, the taxpayers obviously want to make sure they can use it for the maximum amount of events possible but in this instance we really feel the FFA was not offering us something that was compelling… we weren’t receiving offers for the big games we thought were important for SA.

“Taking Adelaide Oval offline for six weeks with what was being offered just didn’t make sense to us… and that’s why Hindmarsh Stadium was the venue we were hoping we’d be able to use.”

He said FFA is set to come back with new details about a prospective offer within the next week, and “they’re going to give us another opportunity to bid going down the track”.

It’s understood the SMA is concerned about lost revenue not just from game-day takings, but from pre-booked events such as weddings, tours and other functions, for which it would have to pay compensation on top of lost income.

Sources have told InDaily the Government baulked at the WWC event over FFA demands that SA invested an equivalent sum to other states involved in the bid, but would not guarantee any marquee matches would be played here.

If the Government really did want to use Adelaide Oval, they’d be able to

But the Government’s refusal to shift AFL from the Oval for a significant period, even with three or four years’ notice, raises questions about whether the existing stadium deal is practically workable for hosting any significant international events, unless they fall outside the annual football and cricket fixtures.

“There would be a number of things I’d suggest were conveniently overlooked in the rush to get this all done [when the contract was made]… it’s clear that they put that provision in without thinking through and understanding fully what the provision actually meant and what it did to the business model of Adelaide Oval,” a source said. 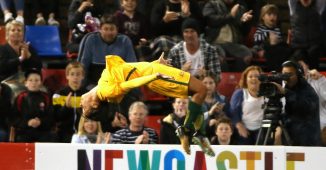 But Patrick Conlon, the former Labor Infrastructure Minister who steered the deal through parliament – after the original terms were already in place – told InDaily: “My view would be that if the Government really did want to use Adelaide Oval, they’d be able to.”

InDaily has asked the Government to provide details about why it believes it would be liable to compensate Adelaide Oval stakeholders for international events.