The council will instead seek to cut spending by considering trimming down its weekly dinner bill for elected members and changing its meeting structure as part of a broader service review.

The vote followed a motion lodged by north ward councillor Phil Martin for the council to reveal the total cost of catering weekly post-meeting dinners for councillors and senior staff, as well as civic receptions hosted by the council at Town Hall.

Martin told last night’s meeting that the council regularly hosted “six-star receptions” costing in the “many thousands of dollars”.

He said he supported the council hosting the receptions as they were an “important way to celebrate the success of the city”, but added it was also important for elected members and the public to review “what the real cost is before any decisions are made”.

“They hand around little porcelain spoons with pork belly and skewers of prawns and all that sort of stuff,” he said.

Martin received support for the council to reveal the total cost of the weekly post-meeting dinners, which InDaily previously reported was in the vicinity of $750 each week – excluding wine.

What are we saying to potential investors in the city when we welcome them into this august building and we have nothing to offer them but crumbs?

Area councillor Anne Moran said she was happy for the council to be more “frugal” with its spending, but warned against axing the dinners entirely.

“They serve a very, very strong psychological purpose,” she said.

“It means that you can sit down and break bread with your colleagues, de-pressurise and also discuss things with the administration.

“There have been many a time when the CEO and I have been very cross with each other but over a glass of wine and a frugal stew we have been able to see eye to eye.”

Moran was also supportive of scrutinising spending on civic receptions, which are held at the discretion of the Lord Mayor and cost, according to the council, on average $3000.

“The receptions have got flashier,” she said.

“I personally enjoy them and I don’t really want a biscuit and a cup of tea, but I’m sure we can cut down.”

The suggestion drew backlash from south ward councillor Alexander Hyde, who said any cuts to civic receptions would reflect poorly on the council’s reputation.

“Hospitality is the hallmark of a civilised society,” he said.

“It concerns me that we may have been going down the path of unprecedented scrutiny, austerity and almost a sort of Calvinistic approach where we offer a tea and biscuit.

Deputy Lord Mayor Houssam Abiad amended Martin’s motion to remove the mention of civic receptions, arguing the council already revealed the cost of hosting the events in its budget.

I don’t really want a biscuit and a cup of tea, but I’m sure we can cut down.

His amendment also called on the council’s administration to “revisit the current council and committee structures and look at more effective and efficient ways to meet that take into account he occupational health and safety of council members and staff”.

“I just don’t think councillor Martin’s approach goes as far as looking at what other things we can do to achieve that (cut spending),” he said. 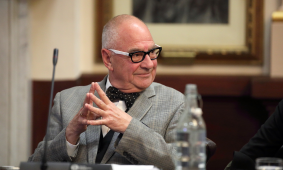 “In no way shape or form should we change or lessen the extent of the hospitality of the City of Adelaide to our ratepayers and to our visitors.

“Let’s look at our own house first, then we can spread that across other aspects of the organisation.”

Abiad affirmed that the amendment would not seek to reduce the frequency of council meetings as previously reported by InDaily; rather, a report would consider changing meeting times, breaks, dinner times and remote meeting provisions.

The amendment passed with the support of all councillors.

A report detailing the cost of weekly councillor dinners and meeting changes is due back in October.