Prominent Liberals on the city council have spearheaded a push for the council to publicly oppose the tax changes, which the Government estimates will pull in an additional $40 million in revenue by changing the way land tax is levied on owners of multiple properties.

The changes, which are being fought by the Property Council and Business SA, will largely offset the budget impact of a broader move to reduce the rate and raise the threshold of land tax in the state, with a net reduction in receipts of around $10 million, increasing to around $18 million in coming years.

The move has the support of Verschoor, who said last week that while she would await the result of the council vote, she was personally “very concerned” by the land tax changes on top of a likely spike in land values as a result of the revaluation.

Independent councillor Jessy Khera also pledged support, telling InDaily this morning that the council should strive to increase capital inflows to the city to support small businesses and “not discourage them with distorting and punitive tax measures”.

But councillors on the minority faction of the council are not convinced; with self-described “Liberal sympathiser” and faction affiliate Anne Moran telling her colleagues, council staff and the media in an email over the weekend that the rules were a “rort”.

“You will get your stupid motion up but I will make sure your resolution does not include me,” the email said.

Moran described Abrahimzadeh’s motion this morning as “stupid”, “ill-informed” and “an embarrassment”, saying that while she was not opposed to councillors criticising the State Government, it was important to “pick fights with the Government very carefully”.

“I would have thought that those four boys (Liberal councillors Houssam Abiad, Arman Abrahimzadeh, Alexander Hyde and Franz Knoll) would be more cautious because although they are opposing the Government, they’re paid-up members of the Liberal Party… and they’re using council to do this, which is completely outside our purview,” she told InDaily.

“Their voice is the Property Council, it is not the Adelaide City Council.”

Moran described Treasurer Rob Lucas as “one of the most admirable politicians”, adding that changes “were good (and) didn’t hurt the mums and dads at all.”

“What it does hurt is the multiple landholders who have been paying little land-tax because of the way it’s been set up,” she said.

“That’s been exposed and they’re going to have to pay it now like everybody else does.”

Moran also affirmed that if Abrahimzadeh’s motion passes, she would request that Verschoor include the names of the councillors who opposed the motion in the letter.

“If I have to, I’ll be sending my own letter to Steven Marshall and Rob Lucas to tell them Team Adelaide’s selfish view of the tax system isn’t mine or that of any fair-minded person,” Martin said.

“This is Team Adelaide lining up with the big end of town against the interests of Council and ordinary taxpayers.

“Good on Rob Lucas for trying to make the tax system more equitable.”

Donovan described the Government’s land tax reform as “closing a loophole” in the taxation of property investors who received multiple tax-free thresholds.

“This loophole has already been closed in other states as it clearly does not provide equity,” she said.

“However, given that this has been legal for some time, and therefore people have set up long-term investment strategies using this system, it is reasonable for those investors to seek a roll-out timeframe that allows for a change of investment strategy.”

Simms agreed that the reforms would allow for a more equitable tax system and questioned if Abrahimzadeh’s motion fell outside the council’s remit.

“There are some people on the council who have argued very strongly against council members advocating for the State Government to take action on an issue and since I’ve been on council I’ve put motions on taking action on climate change and declaring a climate emergency, on strengthening renters’ rights, on calling on the Federal Government to put money into social housing,” he said.

“Why would those issues be opposed by Team Adelaide for falling outside council’s core business and yet when it comes to standing up for vested interests, wealthy investors and landlords, they want to go into it for them?

“I find it quite baffling and really they should be consistent on their position on these issues.”

But Abrahimzadeh said opposing the land tax reforms was in the interest of city ratepayers, as it could drive away investment and cause a spike in the number of vacant rental properties.

“I’ve said this since day dot: we are doing this for the ratepayers and the City of Adelaide,” he said.

“We are going to lose out on this because a lot of the ratepayers have said: ‘We will take out money and invest it elsewhere. We will sell our assets interstate.’

“I would hate to see that happen – investment needs to stay here.”

Abrahimzadeh said he was also concerned that the measure would be “the third nail in the coffin” for investors in the city, alongside the Valuer-General’s ongoing land revaluation and a foreign investors’ tax brought in by the former Labor government. 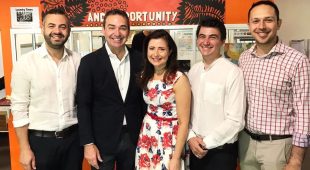 Fellow Liberal councillor Franz Knoll said last week that he had not seen the detail of either the proposed land tax measure or the motion before council, but would support further consideration of the issue.

InDaily contacted Team Adelaide affiliates Mary Couros and Simon Hou for comment but did not receive a response.