The operator of one female-only self-defence and martial arts program in Adelaide’s southern suburbs says she has noticed a surge in new members.

Females Fighting Forward founder Carly Gangell has trained hundreds of women ranging in age from 13 to 60 years-old at her Woodcroft club since 2013.

“I am seeing an increase in numbers of parents enrolling their teenage daughters into sessions to learn self-defence,” she said.

“There’s been quite a lot of media attention around assaults and attacks on females recently, and I feel like parents are obviously seeing this.

“There’s been a huge increase of parents coming in with their teenagers, and even girls up to the age of 23, parents are bringing them in to do these sessions.”

In the past few years, the murder of a string of women in public places has attracted increasing public attention.

Gangell believes these and other widely-publicised cases has prompted interest in female self-defence.

“The initial interest is mum and dad going, ‘hey, I think you should learn this’,” she said.

“We’ve all been teenagers and we all think that we are a little bit invincible and we all try to rebel against things mum and dad say like, ‘stay off your phone’ or ‘call me when you get there,’ but they’re definitely not resistant to the classes.”

Gangell, 21, established her self-defence program when she began to fight competitively aged 15.

It works through potentially violent scenarios women might experience. 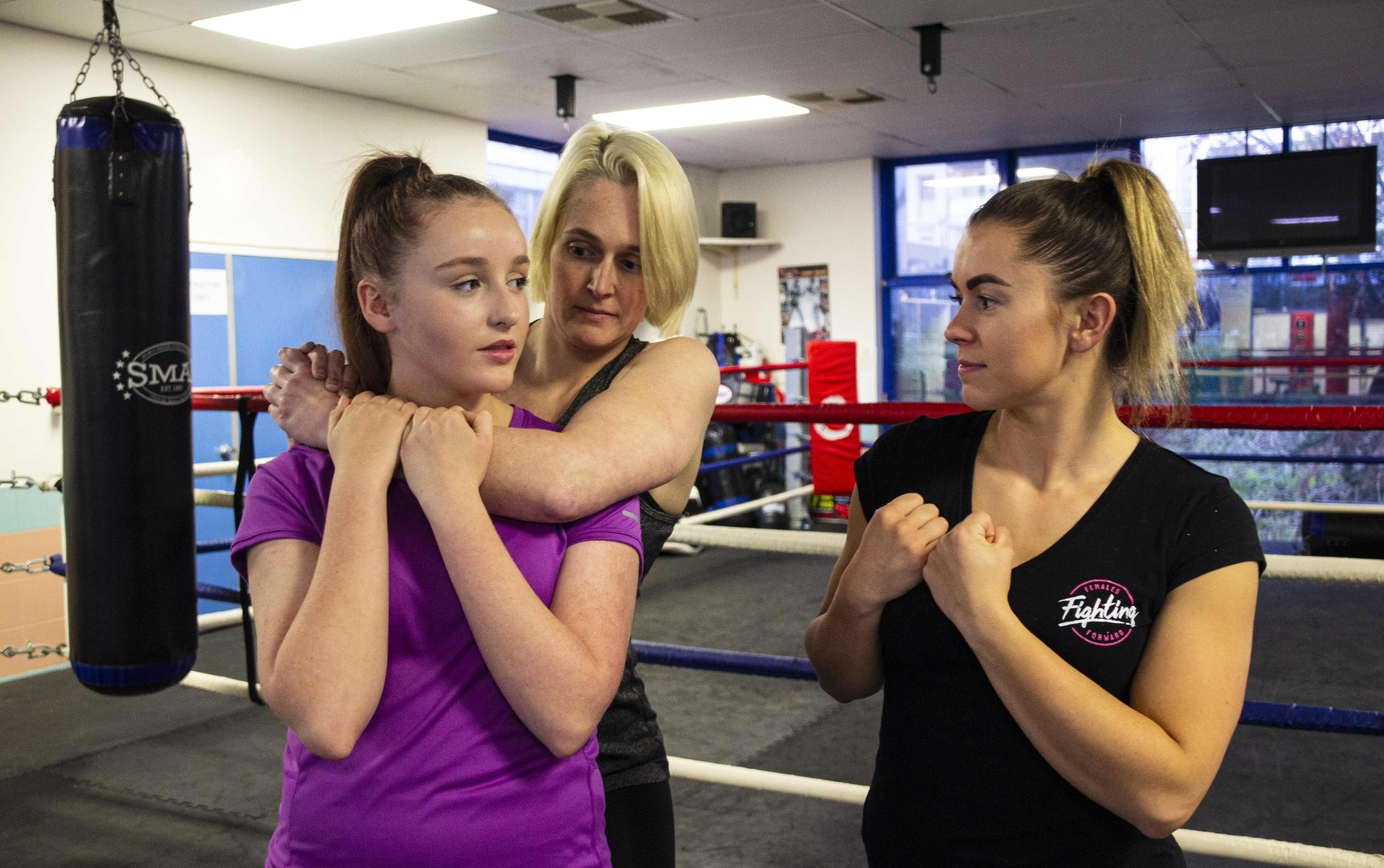 Part of the training gives women the skills, knowledge and “will” to fight back and remove themselves from physically and sexually threatening situations.

“For example, that might be being grabbed by the wrist, being chocked-up against a wall, being pulled by the hair, or being grabbed from behind,” she said.

“We also do a sexual assault defence segment where we go onto the floor [because] a lot of women will find themselves on the floor so we teach them how to get out of it.”

To combat this, Gangell also teaches clients how to de-escalate situations verbally and through body language.

“We train our women how to talk their way out of it.

“Body language is a big thing as well, so if you’re in a situation where it might not escalate, but your body is signalling it to escalate, then you can actually put yourself in a worse position.”

Gangell said that if talking fails, women of difference sizes and strengths are taught how to strike and “inflict damage onto another person” – but not to punch.

“Punching isn’t a reaction for them, so we work on moves that can generate power,” she said.

“At the end of the day men can normally punch a lot harder so it needs to be effective and straight to the point.

“We do some elbows, we do some knees, some push kicks, and we also do some moves from the floor as well.”

Gangell instructs Muay Thai classes as well as self-defence classes because she believes the skills complement each other.

“A lot of martial artists have quite a bit more confidence than your average person,” she said.

“That doesn’t mean they go around looking for fights or anything, but they’re aware of their own capabilities and are aware of what others are capable of.”

Gangell herself had her first professional Muay Thai fight when she was 16 and has Australian, South Pacific, Commonwealth and World titles. Photo: supplied.

Gangell says women shouldn’t take self-defence classes because they feel vulnerable but because they deserve to feel strong.

“I think it is important for anyone to have the confidence to speak up and fight back, not just for women,” she said.

“[But] I think for women it’s also very empowering.

“We don’t tend to have that real fight naturally in us, so to develop that it’s actually quite an empowering thing.”

She did say, however, that women who were trained in Muay Thai, “wouldn’t put themselves in a situation where something could happen.”

“That doesn’t mean they go around looking for fights or anything, but they’re aware of their own capabilities and are aware of what others are capable of.”

Critics have spoken out against whether it’s a woman’s responsibility to stay safe, claiming rhetoric that places the onus on women to keep themselves out of danger is victim blaming.

Some have also gone as far as stating self-defence classes can be problematic as it shifts the focus away from the perpetrator of the violence.

InDaily reporter Stephanie Richards was taught self-defence in high school in 2010 as part of a mandatory course for P.E.

Reflecting on the classes, she said “it seemed like a bit of an ambulance at the bottom of the cliff situation where you’re kind of giving a quick fix to a much larger problem”.

“The reason there are self defence classes is because there is that societal problem that some people think it’s OK to attack people regardless of what their gender is.”

Richards said that as part of the course she was taught how to strike, kick and manoeuvre her body if she was attacked, and “how we should safely behave in public.”

“This was in terms of what you should be doing if you’re walking alone at night and it’s dark and there’s not very good lighting.”

She said the overall message was: “when you’re by yourself you need to be aware.”

Richards said she wasn’t sure if she felt safer after self-defence training and would have to do a refresher course.

InDaily contacted SA Police and asked about the effectiveness of self-defence classes.

In a statement, it said it supported “anyone” taking self-defence classes to “increase their confidence and awareness about personal safety and how to react to threatening behaviour in or in an emergency.”

It also said “people” should be “alert”,  “confident” and keep to “well-lit and populated areas”.

“Walking with confidence, looking at and being aware of people around you may decrease the likelihood that they will attack you, as they will lose the element of surprise and you would be able to identify or describe them to police.”